The sights and sounds of Superbrothers: Sword & Sworcery EP 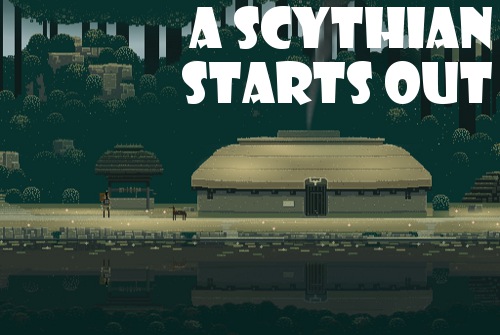 The longer I don’t play any of those PC games I’ve gotten over the past year or so from too many indie bundle collections to name, the bigger my collection grows untouched with each new tantalizing bundle that adds to it. In fact, I’ve started passing up great deals simply because my digital collection is truly bloated. If I was to be honest, I still have a hard time remembering I have a gaming laptop now, as I mostly use my Macbook still, especially since that’s where I do a lot of my writing and all of my comics. My bad. But I finally bit the bullet, pulled the plug, kicked the can–what have you.

Seeing as Superbrothers: Sword & Sworcery EP is the new Braid/Cogs in terms of being coupled in nearly every new bundle that drops, I figured it was a good place to start. Plus, the look of the thing alone has had me intrigued since word-of-mouth about the little sound-based fantasy adventure came out, but since I’m the type of person who lacks both a smartphone and/or an iPad–and I can’t really even forecast when I’ll ever get such a device–I’ve had to wait  for it to get ported to the PC. Which was done back in May 2012. I got my copy of Sword & Sworcery from Humble Indie Bundle V, installed it to Steam, and quickly forgot about it because I have that tendency to do so. Maybe this is a forthcoming 2013 New Year Resolution in the works…

I guess the easiest way to describe Sword & Sworcery is that it’s an indie adventure game. Sound and atmosphere play extremely important roles, but there’s also some timing-based combat and puzzle elements to boot. You control The Scythian as he/she explores a mythic realm, uses a sword to do battle, and wields sworcery–song-based magic to get down to it–to solve musical mysteries. You’ll meet a small cast of humble locals as you move around the land, as well as some nefarious monsters, like a pursuing demon wolf-beast. There’s some other stuff that’s not really clear, like these tomes and mentions of antlered gods, but it all does a wonderful job of sustaining a fantastical yet believable other-world. Strange structures, that flipped Triforce symbol that appears now and then, an actual usage of a record to represent Side A and Side B of a place–moments of wonder, all of them. It makes each new location exciting to explore.

Let me take a moment to discuss the real meat of Sword & Sworcery: the music. The music, Grinding Down readers. It’s both calming and hypnotic, and at times absolutely unnerving. Just like the soundtrack from Fez. I’ve spent more time listening to the tunes than playing the game at this point. “The Ballad of the Space Babies” does something to my insides that I can’t, without a medical degree, accurately describe. But I’ll try. It fills me with air, it lifts me up. There’s a promise of friends whispered off the horizon, and cloud-walls that ripple with each breath to lead me there. I am floating, moving through space and heading home. Only I know the way. It feels like forever, but the speck of light is growing, crowning, now radiant, with eyes open. When I get there, they close; the ballad’s journey is over, and I’m safe.

Another part of the game that I’m enjoying, but those that follow me on Twitter are likely not is the fact that nearly everything can be tweeted directly from the game. Small bits of narration, descriptions, instructions, and even dialogue. I’m choosing my tweets carefully, but because there’s a lot of whimsy and downright silliness to the writing in Sword & Sorcery, it is often hard to resist tweeting out every encounter. For now, here’s some I’ve done:

More to come though.

So far, I’ve completed Session 1 and Session 2. Both sessions are around thirty to forty-five minutes long, depending how fast you move and how quick you figure out the song-based puzzles. The sheep one in Session 2  took me a little bit to figure out, but otherwise nothing too difficult. Moreover, the boss fight that completes Session 2 is more stressful than challenging, requiring constant attention and quick reflexes, which are probably easier to do on an iPad or phone that moving a mouse cursor left and right. I’ll get better, now that I know what to expect from these situations, but I got that Gold Trigon with only one star of health left. Whew.

I’ve taken some time off of work next week for the Thanksgiving holiday, and besides catching up on a lot of drawing for my 365 BAD COMICS project, I’m looking forward to playing some of these games of mine a wee bit more, with Sword & Sworcery‘s Session 3 high on the list. I’ll be back. Until then, keep clicking, listen hard, and float away.