If you work hard in Punch Club’s training, the fight is easy 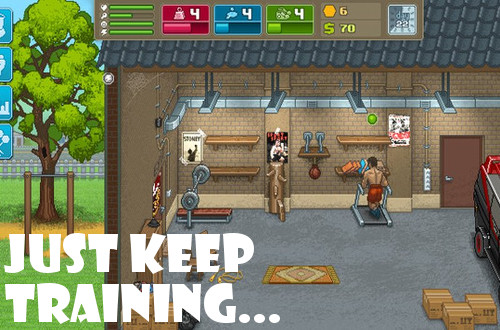 I don’t know much about boxing, and I know even less about what it entails to train to become a good boxer. I figure it’s a lot of punching bags, doing push-ups, and dodging and weaving. I saw one of the Rocky films, but couldn’t tell you which one. Well, if anything, Punch Club is showing me that there’s much more involved, such as holding down part-time jobs, fighting mutated monsters in the sewers, eating food, sleeping, and keeping up your romantic relationships by bringing a young woman some flowers. The boxing life, it ain’t easy.

There’s a story here, and it’s sad. Your father was brutally murdered before your eyes…kind of just like how Batman’s parents went down. Now you must train hard, eat chicken, and punch dudes in the face to earn your place in the Punch Club ranks. All of this serves for you to discover who ended your father’s life and get that sweet, sweet revenge. I’m not there yet, still pretty low in the ranks, because it can be hard to multi-task, and so I’m splitting my time between multiple tasks, not sure what to really be focusing on in the short term. I figure it is better right now to earn money and buy training gear for my garage than keep paying the expensive gym fees, and that’s my main goal. The problem is something else always gets in the way.

Punch Club, for those that don’t know, comes from Lazy Bear Games and is a boxing tycoon management game with multiple branching storylines. Your goal is pretty clear from the start, but how you get there depends on whether you want to legitimately climb the rankings or take the more ridiculous, shady route. I’m kind of dancing between both paths at the moment, unsure where my loyalty lies, but I’ll eventually need to pick a path and stick to it.

Whatever task you’re completing, whether is it punching a bag or delivering pizza, gameplay boils down to watching a series of fluctuating statistic bars representing your various levels go up or down and then judging when enough is enough. Every activity essentially fills up some and empties others, with time given a crucial stat bar of its own. It’s an approach that carries through to the most important portion of Punch Club: training up your fighter. You can improve your brawler’s three core attributes–strength, agility, and stamina–by using certain pieces of gym equipment. However, your abilities will degrade over time when you’re not exercising, so it’s best to reserve the really hard graft for the period just before your next fight, to better your chances for climbing that ladder.

I’m usually not one for management sims, but Punch Club has both an aesthetic and attitude that I really do dig. It doesn’t take itself too seriously. This is basically a sim of a 1980s fighter movie, so all the nostalgia is quite warranted. I won’t spoil all the references, but you’ll see loving nods to Rocky, Blood Sport, Cobra, The Teenage Mutant Ninja Turtles, Mortal Kombat, Street Fighter, Fight Club, Aliens, and more. The game itself uses pixel art, and it’s better than anything you probably ever saw on the SNES, with more colors and attention to detail. It might not be for everyone, but it’s definitively for me.

I don’t know how far up the ladder my trainee will get, but, for the time being, I’ll keep climbing.