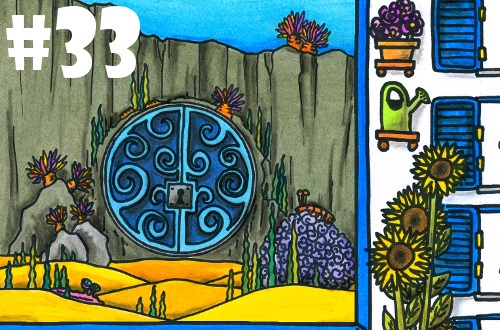 Best time for baby
During war, revolution
Find the Oracle

Everyone needs help
In the Lands of Dream, just read
Click all clicky things 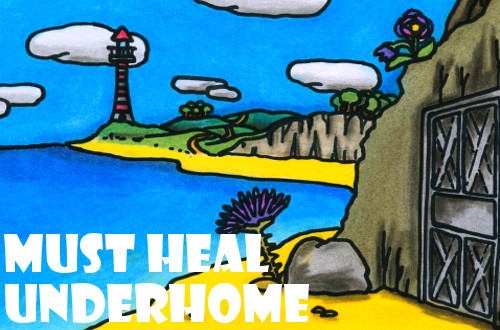 Sometimes I just want to read. Other times, I want to play, or, more to the point, interact. With people and animals and things. Cause and reaction is what I’m looking for, but the safe, casual kind. Don’t shoot me in the stomach and force me to find medicine to stop the bleeding. Instead, let me find some fish food for a hungry fishie that will make it smile. Well, after a panic-inducing, unpredictable weekend, I wanted to do both: read and interact harmlessly. Thankfully, there’s The Sea Will Claim Everything, a game which I’ve danced around revisiting lately. Well, the straw that finally broke the camel’s back is that it has now been released on Steam, and Jonas Kyratzes was kind enough to provide me with a free key since I already purchased the game back in 2012 from the Bundle in a Box promotion.

Allow me to quickly summarize what’s going on in The Sea Will Claim Everything. If I can, that is. You visit the Lands of Dream through a special window which allows you, the person reading this and playing the game, to see, travel, and interact with the various strange and fantastical elements of the Fortunate Isles. You begin in the Underhome, a biotechnological house unlike anything you’ve ever experienced before. Unfortunately, Underhome has been badly damaged by goons threatening to foreclose on it; they are so rude that they even cut up a nice rug. Your job is to help The Mysterious-Druid, who likes to simply be called The, get Underhome back to its healthy former self. However, along the way, you’ll end up on a larger quest to free the citizens of the Fortunate Isles from Lord Urizen’s political and economic oppression.

Strangely, when it comes to me and point-and-click adventure games, it’s always about getting to the next scene to see where things go. Brute-forcing through the puzzles to see what new characters pop up and grab more items for my ever-growing inventory. However, with The Sea Will Claim Everything and other works in the Lands of Dream, I prefer to linger, to absorb. Every screen is packed with flavor and things to click on, with my personal favorite being all the little mushrooms sprouting up in the Underhome. Verena Kyratzes’ artwork is colorful and pleasant, perfect for a storybook-like tale, and you should not take anything for granted–each individual flower has its own flavor text, as does every book and drawer and item at a merchant’s stall. Also, there’s evidently 700 collectibles to gather, so click, click, click.

Gameplay is mostly clicking and reading, and it doesn’t take long to realize that The Sea Will Claim Everything is roughly just fetch quest after fetch quest after fetch quest. Occasionally, you’ll have to find a recipe and create the item someone needs instead of simply finding it elsewhere in the world and bringing it back. I’m okay with fetch quests, as sometimes it is all I want, but I do wish that the quest log, represented as a single-page scroll, did a better job of showing your progress. For example, I need to make a special soup that will help heal the Underhome, and this requires gathering a number of items, but the quest log doesn’t show what I have and don’t have; instead, I need to pop back into my inventory, scan the list, and then figure out what is missing. Also, with so many people and strange names, it’d be helpful to list where the person is in the quest so that I can turn it in without having to scan every single screen in Port Darragh over and over again.

Since you’ll be doing a lot of sitting on a single screen/area and reading flavor text, dialogue text, recipe text, and dialogue text, a good soundtrack is a must. The music needs to not overpower your brain and get in way of the nifty characters and stories, but at the same time ground everything together, enhance it. Make you believe that this talking spider is part of the world. That this town of anthropomorphic creatures live lives and exist beyond your window view. I’m happy to report that Chris Christodoulou’s soundtrack is nearly perfect. Inspiring and mystifying, the songs fit the adventure. I do wish some were a little longer or looped more instead of repeating after a two minutes or so, especially when you are in a room for longer than that. I think my favorite is the piano-driven, calming “Plingpling Fairydust,” but the dark, beyond unnerving “Swamp Thing” is also quite special…for reasons.

The Sea Will Claim Everything is really the most charming oddball, and I’m looking forward to helping everyone I can on the Fortunate Isles, whether it is by solving a mysterious murder or giving them a cookie. It just might take a few more sessions. That’s okay. Those mushrooms aren’t going anywhere.

The Fabulous Screech will make you click and feel emotions

The Sea Will Claim Everything is a game I think about now and then, a game which I haven’t really touched in about four years. That said, I think about it like this: starting over, falling into it once more, eyes wide and absorbing, my brain ready for an overload of story and characters and rich lore. The amount of detail that Jonas Kyratzes imagined up for this world, these Lands of Dream, staggers me still, as does the inviting, storybook artwork by Verena Kyratzes. Together, these two create portals, doors that open and close, but take you far away from where you started. I don’t know if I’m ready yet to give The Sea Will Claim Everything another go–I believe I walked away from it feeling somewhat overwhelmed–but I continue to build up brain space for when that day comes.

In the meantime, there’s The Fabulous Screech, which is a smaller, more contained bit of whimsical fantasy and storytelling. No, it’s not about everyone’s less-than-loved Saved by the Bell nerd-for-brains. The jaunty plot is that your partner bought you a ticket for the season’s last performance by The Fabulous Screech and His Trained Humans. You travel to the town of Oddness Standing to see this unique show and learn how The Fabulous Screech lived its life. Interestingly, this game came to fruition as a Christmas gift for someone’s boyfriend when times were tough and funds were short, and the Kyratzes duo ended up making it more personal than originally intended. This is why you’ll click and feel emotions.

Gameplay is minimal and easy, but that’s okay. This is more of an interactive story, and there’s so much to interact with, to click on and read, that dealing with solving complicated puzzles for getting you from point A to point B would have messed up with the laid-back pacing and gentleness blanketing everything here. At most, you have to find an item for a character, and there’s only so many places you can search, so you’ll eventually find it and move ahead. All this captivating reading and visuals are backed by a soothing soundtrack that works when things are bouncy and childish at the theater’s curtains to the darker moments of dread and frailty by the end. Also, and I had this problem in The Sea Will Claim Everything so I suspect I need to learn to live with it, I’m still not a fan of the common-day references everywhere, such as to the Sierra or T.S. Eliot, but I guess that’s what helps make these lands dream-like. That blurring of fantasy and the real world.

The life–and presumably death–of The Fabulous Screech in The Fabulous Screech is anything but straightforward. There’s whimsy and silliness, but also a good amount of stark reality and sadness. Look, aging is unstoppable. That’s a hard fact. Time passes by with every second, and it’s up to us to make the best of things, to find happiness and be happy. I try not to think about my furry pets dying, but I know they will some day, and that debilitating fear makes it difficult to even write about this stuff. Sure, Timmy can be a psychopath and bully, but also a lap warmer and affectionate friend. Pixie can shed like there’s no tomorrow and get her claws stuck in everything, but she also headbutts me hello whenever she can. They are special to me.

Okay, that’s all I can do. Gonna go hug both of my kitty cats now and hope that, at least in their feline eyes, I’m a well-trained human.

A magical show
Starring cat, its adventures
Life is beautiful