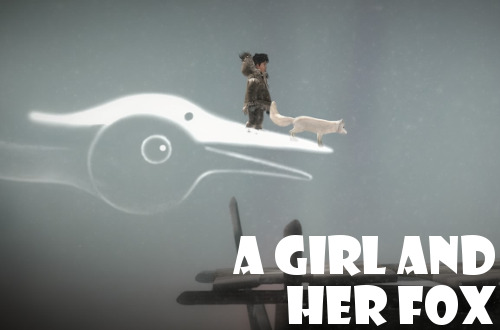 It was supposed to snow this past weekend, and while it did, all we got was a snusting, a new word I’m pushing to get into the OED. It means a light dusting of snow, in case that wasn’t clear. Anyways, this put me in a mood to play something snowy, and after scanning my list of games still to install on my Xbox One I saw it, the perfect winter weather game–Never Alone (Kisima Inŋitchuŋa).

Ultimately, Never Alone is a puzzle-platformer developed by Upper One Games and published by E-Line Media based on the traditional Iñupiaq tale, “Kunuuksaayuka,” which was first recorded by the storyteller Robert Nasruk Cleveland in his collection Stories of the Black River People. I realize that is a lot to take in at once, so please, give yourself a moment before moving on. In terms of gameplay, you swap between an Iñupiaq girl named Nuna and her Arctic fox companion to complete puzzles and navigate the wintry landscape. There are a total of eight chapters to get through, and the game was the result of a partnership between the Cook Inlet Tribal Council and E-Line Media. It is evidently one of a growing number of videogames produced by Indigenous people, and that’s really cool. Too bad I found the whole thing frustrating and disappointing, but that doesn’t mean they shouldn’t keep creating games that celebrate and explore different cultures. I do want more.

You can play Never Alone co-op, but I went through it by myself, which meant manually switching back and forth between Nuna and her fox companion. At first, during the early stages, this was fine, but later you have to take timing into consideration and it can be tricky to get both characters to work in unison. I wonder if the controls would have been better if they followed Brothers: A Tale of Two Sons or ibb & obb. Anyways, Nuna can push/pull boxes around, as well as use her bola to destroy chunks of ice while the fox can jump higher and let down ropes from ledges. There are action sequences where you are being chased that require quick jumping, but most of the game is about moving from platform to platform, often using spirits as ledges to help Nuna get where she needs to be. This does become tougher later on when your fox changes and requires the two to work much more closely to get things done.

Look, Never Alone‘s story and its structure is based on the inter-generational transference of wisdom, and that’s mega neat. It is told in the form of an oral tale, and players are rewarded for collecting “cultural insights,” which are ultimately video vignettes of Iñupiaq elders, storytellers, and community members sharing their stories. These are all well done and produced, and this isn’t the norm when it comes to puzzle platformers, but I’d love to see more of collectibles like this. I ended up missing one by the game’s end, but the majority of them are along the main path, so you’ll find ’em easily enough and should dedicate some time to check them out.

Alas, here’s what I ended up disliking immensely about Never Alone. At first, the platforming and puzzles were rudimentary and simple, but became more time-based as the levels went on, which, when coupled with the fact that you had to switch between characters in a flash, resulted in many annoying deaths. The game is also glitchy, and I’m specifically talking about a tree I ran into during the last level that refused to walk forward; I had to return to the main menu and hit “Continue” for it to truly awaken, but this was only after 20 minutes of attempting to figure out if I just wasn’t doing something right. Ugh. Also, jumping and grabbing on to ledges with Nuna felt seriously inconsistent, and that’s a big part of the gameplay, so boo-hoo to that. I honestly thought, based on the first few chapters, that Never Alone was going to be a breeze, but found myself shouting curses at the TV screen near its conclusion.

It’s a cute game, doing really great things for the Iñupiaq community and culture, but it isn’t the most fun thing to play in the world. Sorry about that. I’m just as bummed as y’all.