Everything old is new again in NES Remix

It’s been said and said before, but I never had an NES of my own growing up. I got started on the SNES–that’s a super NES for those not hip with the gaming language–and a GameBoy for road-tripping purposes. Man, I miss that GameBoy along with my well-played copies of Tetris and Super Mario Land. Anyways, there were a few neighbors that I hung out with and got to mostly watch them play NES titles from the side, and so I ended up missing out on a lot of what many might consider true Nintendo classics. Though I do now also own a NES Classic, which is tiny and cute and needs to see me use it way more, and I have gone back and tried a few of these classics over the years, such as Jetpac, The Legend of Zelda, and Metroid.

When word got out that Nintendo was shutting down its Nintendo Club program back in the summer of 2015, I got my act together and spent points that needed spending. You can see what I procured for myself, though obviously this post is going to be all about that NES Remix. ::takes a deep breath:: Right. Here’s everything remixed in this kickoff of Nintendo’s new series, which, as of this posting, is three entries deep:

NES Remix is all about changing things up, going from the expected to the unexpected. Most challenges in NES Remix are simply excerpts from these vintage games, involving timed tasks, such as speedrunning, clearing an area without dying, or defeating a certain number of enemies while utilizing a given power-up. They do not start out very taxing, and it’s more about nailing the challenges perfectly in good time to earn stars and 8-bit stamps for your collection book. Stamps that, now thanks to the ice-cold removal of the Miiverse app, are pretty much useless, but whatever…I still like collecting ’em.

However, the remix categories are additionally based on the fundamental reshaping or combination of games, sometimes by blending in more modern graphical features of the Wii U, for a new experience that may even be technologically impossible on an actual NES console. For example: completing a darkened level that is lit only by a spotlight superimposed over the player’s character, navigating on disappearing platforms in Super Mario Bros., or playing a Donkey Kong stage as Link instead of Mario, as seen in the screenshot at the top of this post, challenged by Link’s inability to, y’know, jump over incoming barrels. These are neat and the real draw of NES Remix, even if modders have been toying with this stuff for years; it is fun to see Nintendo’s stab at it.

Naturally, I was more interested in seeing the remixes for games I’m familiar with, such as Balloon Fight, Excitebike, and The Legend of Zelda. Other games, like Ice Climber, the Donkey Kong entries, and Urban Champion, did nothing for me, as I already didn’t know how to play them to begin with. I recently unlocked all the levels for Pinball and immediately cleared them because Pinball is just the best, whether in real life or videogame form. I sometimes lose myself in Kirby’s Pinball Land because, every now and then, you just need to hit a ball with some paddles and earn a high score.

NES Remix is good fun. I don’t want to complete every challenge it throws at me, and that’s fine. I’ll stick to the games I know and appreciate and ignore the oddballs. Still, I have other Wii U titles to get to as I inch closer and closer to boxing up the system and getting a Switch.

A few days ago, I treated myself to $10.00 of spending e-bucks for the Nintendo 3DS eshop. Y’know, my favorite place to buy digital videogames. I kid, I kid. Actually, it’s gotten a whole lot better since I last perused the shop with a purpose, and I saw a whole bunch of strong contenders, but sadly, most of those titles costed $7.00 or $8.00, and I’m always trying to get the most for the very least. Yes, I shop at The Dollar Tree quite frequently, and yes, I’m proud of it.

Anyways, here’s what I actually ended up getting, leaving my account with just $0.40 left over:

The first two listed above are perfect for quick gaming on the side. 3,2,1…Words Up! is quite similar to a Facebook game I used to play with family members called Wordtwist, wherein you are given a bunch of letters and a time limit, and have to create as many different words from those letters as you can. Less stressful and more fun than Quarrel, that’s for sure. And pinball is pinball, no matter what character or theme or brand name you slap in front of it.

Most surprising of these purchases has been The Sword of Hope II. It’s a game I’ve never heard of before, and the sequel to another game I never heard of. Both were released long, long ago in the early 1990s for the Nintendo Game Boy, and I was only interested in Mario and Tetris back then, so it’s not shocking that I missed these releases. Chances are, you did too, and so it’s a little strange to see the second game in the franchise get a re-release for 3DSWare, but I’m guessing that, of the two, it is the superior adventure.

Now, I can admit that it is not a superior adventure in the grand scheme of adventures, but it is a lot of fun. It’s old-school RPGness in the style of games like Wizardry and Bard’s Tale, with single-screen rooms and text-based actions like “look,” “hit,” and “open.” You control Prince Theo, who is sent out into the wild to recover the Sword of Hope yet again (um, see the previous game, I guess) to stop some evil wizard guy. Yeah, it’s generic story-stuff and not entirely examined any deeper than that. Since claiming the game’s wiki page on Giant Bomb as my own, I’ve scoured the Internet for more details, but there isn’t much out there. So I’m updating the page as I play in hopes of nailing down who did what to whom and why.

Battles are turn-based. You can attack, use magic, or opt for an item. Some characters learn spells, others attack with melee weapons, like rapiers, swords, and knives. I only have three characters in my company so far, and here’s how they break down: Theo is strong with sword, Mute is magical, and Nina is a waste of space. Winning battles earns money and experience, with the occasional special coin, which you can sell for a smooth 150 gold. It’s been pretty clear when I am supposed to be grinding, too. Y’know, RPG stuff.

The most entertaining part of The Sword of Hope II stems from the character limit problem on the Nintendo Game Boy had. It starts pretty innocently enough, with CAVE BHD WTRFALL:

I get that. Not enough room for all the descriptive text. I can still quickly read that as CAVE BEHIND WATERFALL and move on with the game. But then Prince Theo and company arrive here, and I’m stopped dead in my tracks, mouth agape, completely befuddled: 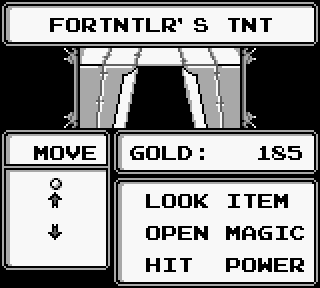 There’s even more brain-bending names that don’t fit throughout the game, including some humorous items and weapons in shop menus. Like the WDN BMRNG. But I won’t spoil ’em all. I highly recommend you check the game out if you have a 3DS; The Sword of Hope II is only $2.99, and it’s a solid price for some straightforward RPGing that is more addicting than first impressions imply.