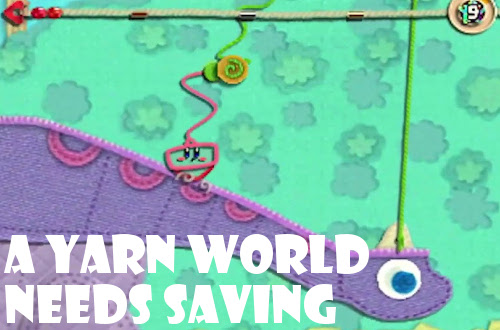 Once upon a time, long, long ago, I had a retail copy of Kirby’s Epic Yarn, which is a light-hearted platformer developed by Good-Feel and HAL Laboratory and published by Nintendo for the Wii way back in 2010. Then, during my divorce, I gave up the Wii and most of its games, yet ended up still having the case of the game, along with the manual…minus the disc. Hmm. I suspect it was inside the Wii when it was unplugged and all that because I’m usually pretty good when it comes to not losing my beloved videogames. Thankfully, I can stop looking for it because I have a newer, shinier version of it to play.

Kirby’s Extra Epic Yarn for the Nintendo 3DS might very well be the system’s last big release. I don’t see much else coming out down the road, but you never know…I feel like a lot of people are constantly surprised to see the handheld still being supported, but it makes sense to me when you factor in its large user base. Sure, most have probably moved on to the Nintendo Switch by now, as I will eventually do one day, whenever they get around to announcing an Animal Crossing-themed bundle. Anyways, it’s an enhanced remake of Kirby’s Epic Yarn for the Wii, which means it has the same content as the original release, but also includes new power-ups, modes, and sub-games starring Meta Knight and King Dedede as playable characters. Alas, this version now lacks co-op, so Prince Fluff is not playable, but that’s okay…it’s perfectly fine for solo-ing.

Kirby’s Extra Epic Yarn‘s not a plot-heavy adventure despite the word epic in its title. Kirby is wandering around Dream Land one day when an evil wizard banishes him to Patch Land, a world made up entirely of fabric. Kirby is transformed as well, including his powers. He can no longer copy the abilities of enemies by eating them whole; instead, Kirby can shift form into various vehicles and other devices. Using this and his yarn whip, he journeys through Patch Land as he attempts to put it all back together.

Many originally complained that the Wii game was a bit too easy and forgiving, almost built for children. Well, for those that want more challenge for their cutesy pink platforming star, the introduction of a new Devilish Mode will keep seasoned gamers more on their toes. This new mode ups the challenge a teeny bit–this will never be a splatformer–by having a devil-like character following Kirby the entire time, trying to get in his way or hit him with tossed items. I tried it a few times and found that, ultimately, it is not for me; I like taking my time and exploring every nook and cranny, getting every gem I can, but this mode forces you to keep moving and never stand still. No thanks, but it is there if you want it.

Along with Devilish Mode, there are two extra additions to the original Kirby’s Epic Yarn experience exclusive to the Nintendo 3DS version, plus amiibo and StreetPass support, both of which I no longer care about or am able to do. These are the minigames starring King Dedede and Meta Knight; one is called Dedede Gogogo, and the other is Slash & Bead, and both are relatively similar to each other. For Dedede Gogogo, it is basically an endless runner with Dedede moving across the screen, hitting or diving through whatever comes into his path all while trying to collect as many beads as possible. Slash & Bead has a teensy bit more agency, allowing the player to freely explore the screen, hacking and slashing at everything as the legendary Meta Knight. Each minigame contains four stages to complete, and you can craft…uh, things, such as a yarn donut, with some of the gems and materials you collect in these minigames. It’s not a boatload of extra stuff, but it is something else to do.

Here’s the thing. For Kirby’s Epic Yarn, I never got that far, maybe just to Hot Land. The reasoning behind this is because I was playing it with my then-partner, and we just didn’t end up returning to it after our first gleeful initial session with it. For Kirby’s Extra Epic Yarn, I’m already at Hot Land and excited to keep playing. I also am looking forward to decorating my apartment with all things green, as well as helping to flesh out the other apartments with required furniture and wallpaper. It’s not Animal Crossing: Happy Home Designer, but I’ll take it.