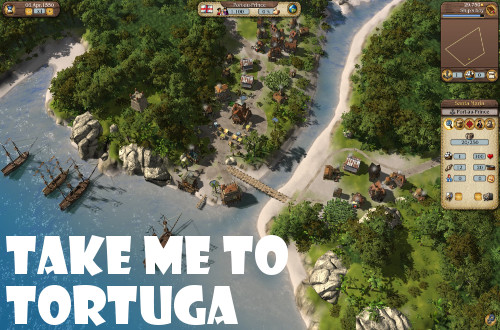 I knew going into Port Royale 3 that this wasn’t a game for me, and, surprise surprise, it’s totally not a game for me. Except, on paper, it sounds a lot like many of the board games I’ve been getting into lately, what with its numerous systems and decisions to make, various paths to follow. Almost like a deck-builder. I mean, there is a board game with a similar name to this, but it’s not one to one. Either way, I gave it a shot, but was ultimately forced to walk the plank. Yarrr.

Here’s the lowdown on how all this starts in Port Royale 3. You’re in the Caribbean during the turbulent 17th century. The mighty kingdoms of Spain, England, France, and the Netherlands are fighting over the colonies. As an up-and-coming young sea captain, your only goal is to become the most powerful man in the New World. Seems reasonable to me. Well, to achieve that goal, you first have to choose one of the two available campaigns–Adventurer or Trader. I went with…the trader route, because, even when I was playing Civilization V, I steered clear of fighting with other territories and focused mostly on being a peaceful person that just liked to earn a few coins now and then.

If you go the way of the Adventurer, you’ll lead an unforgiving campaign for the conquest of the seas, which involves a lot of invasion, piracy, bounty hunting, and raiding. Basically, you’re a pirate, and you need to do whatever it takes to build your own empire in the Caribbean. The Trader’s path is, on the opposite, mostly about developing your riches and economic power. To become the most powerful Trader of the New World, you will need to create trade routes, build industries, and develop the economy of the colonies. There’s also a Free Play mode, where you can mix both of those methods in any way you want, letting you create your own unique tale of plundering and selling goods.

So, I sailed around the Caribbean a bit, going from place to place, such as Santiago and Tortuga, purchasing goods for low prices and selling them elsewhere for higher prices. Y’know, making an earning. Sugar and rum were very popular choices, as was wood. Always gotta get that wood. Reminds me of how important it is in Catan; during one game, I traded almost everything I had, including my precious sheep, for a single piece of wood, but it was worth it, as it helped me build one more road, giving me the Longest Road victory point. Anyways, I diverge…mostly because I don’t know what else to say about Port Royale 3.

Port Royale 3‘s soundtrack is actually quite nice, and I know this because I had the game on pause a lot while typing up this blog post. It was composed by Dag Winderlich and Tobias Adler and features a lot of frantic drumming and seagulls crying out in the background, and that might sound nightmarish to some of y’all, but it’s really not. As someone who grew up near the beach, it’s familiar.

Look, I’m sure if I took the time to truly dig into all the menus and various options at play, Port Royale 3 would offer me a ton of things to do and plan for, but it just didn’t hook me from the start. It begins slow, thankfully, but even still, I don’t know what half the menu options mean, even after ranking up, and I’d rather play something like The Sims 4 or Zoo Tycoon to get my simulation fix. Oh well. Guess the pirate life is not for me.