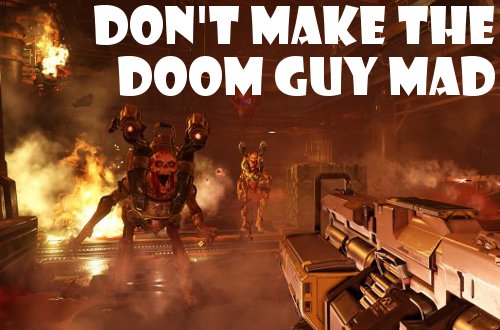 This might come as a shock, but I first experienced Doom via its Super Nintendo Entertainment System port back in late 1995, at a neighbor’s house. I remember its red casing well, as well as my friend’s father being the sort of lawn fanatic that concerned me even at the virtuous age of twelve. This game and my copy of The Offspring’s “Smash” on cassette were items we hid whenever this man walked by his kid’s bedroom, but perhaps the topic of keeping things with parental warnings on them secret is best saved for another post.

Regardless, I am one hundred percent certain that this is not the version the developers over at id Software intended for people to play first. The SNES edition was published by Williams Entertainment and featured a custom engine programmed by Randy Linden. Naturally, this meant there were some stark differences between the PC and console versions, though I didn’t know about them back then, only years later upon reading about it via the Interwebz. One element that stands out is that, due to animation issues, there could be no enemies fighting other enemies, something that I found deeply amusing in the original first-person shooter where you fight demons from Hell.

Anyways, that’s not the Doom I am talking about for the rest of this post. That Doom is the new Doom–still just called plain ol’ Doom–from Bethesda and id Software and released back in May. I watched the Internet go all bug-eyed crazy over it and moved on with my life as, when it comes to shooters from Bethesda, I prefer the ones that let you slow down time and stuff your inventory full of coffee mugs. Well, to probably everyone’s surprise, the company kicked off E3 2016 by releasing a free demo of Doom‘s first level for all to taste, and here I am, some number of months later, ready to talk about it. Such is how my summers now go.

Let me give you some deep narrative setup so you understand why the ultra violent, ultra faceless character you are playing as is so invested in shooting demons from Hell into bloody bits with a supply of deadly firearms. As the lone DOOM Marine, it’s up to you to obliterate the relentless demon hordes invading the UAC facility on Mars. Mmm. Okay, there, now that’s done, and the guitar-ripping action can begin, and it does, oh so fast. I’m sure it is blindingly speedy on PC, but I was still charmed to see how quick and smooth everything moved on the Xbox One. There’s running, there’s gunning, there’s clambering, and there’s glory killing, all of which is happening simultaneously as a hard rock soundtrack plucked from some forgotten album collection in Satan’s attic pumps you onward.

Doom‘s demo is the entire first level of its single-player campaign, and it wastes no time getting into the thick of things. The DOOM Marine wakes up on a slab in some room of worship, grabs some armor and a gun, and begins blasting Possessed and Cacodemons in their faces. From there, it’s all forward momentum. You’ll push ahead and kill everything in your way, eventually ending up in arena-esque areas where you will have to keep moving to keep breathing. Performing a glory kill–a cinematic take-down you can activate after damaging an enemy enough–will provide you with some health pickups, so there’s more to do here than simply destroy all evil things. I also liked combo-ing one glory kill to another, feeling like a true powerhouse. You can also find collectibles in the environment, as well as take key cards off dead dudes that turned out to not be true powerhouses.

If anything, this demo worked as intended. It gave me a taste of how new Doom plays and feels without restricting the player or holding their hand through the entire experience. That first level is the first level. There’s also no strange Nintendo-like restrictions that say you can only play the demo X number of times or within a specific amount of time. I liked what I played, but I’m not ready to commit just yet, with too much still in my backlog to get through, but at least I know that when I get to this, I’ll have a bloody good time. I promise not to play this Doom‘s SNES port either…unless the rumors of cartridges making a return to the NX prove true.