And that was November, a month of new console generation releases, colder weather, eating everything not called turkey, and doorbusters, which is my new favorite word to hate. Seriously. Tara suggested that Black Friday sales should be called “I’m stupid!” so that when asked what people are there for, they can just say, “I’m stupid!” I kind of have to agree with her on this. We’re only a few years away from Black Week, seven days of stupidly saucy sales priced just low enough to get you into the stores and away from your loved ones. Me, I’m spending this day-after-Thanksgiving in my pajamas, writing about videogames and drinking coffee. Sure, I might go out later, but it’s probably only to Family Dollar for the sweetest deals this side of Pennsylvania. I don’t expect to be trampled.

But wait, that’s not what this post is supposed to be about. No, no. I’m here again to cover the handful of games I’ve played this month, but have not gotten a chance to really examine here on Grinding Down. There seems to be a lot more this month than previous Half-hour Hitboxes (Hitboxs?), and I don’t know why. I guess as the year winds down I am finding myself with more time to dabble. I have also continued to put in some solid hours with Primal, and I expect to beat it before 2013 comes to a close, praise the realm of Aetha.

A World of Keflings

I was surprised at how much I liked A Kingdom of Keflings, which is a very relaxed town-building sim, with a focus on a soul-soothing soundtrack and straightforward missions, like build a house or a factory or put this Kefling in that thing you just built. So far, A World of Keflings seems to be all that over again, except now you can travel between various themed kingdoms for different missions–and that’s fine by me. I also like how you can begin building something, and your little Kefling worshipers will finish putting it together so long as you construct all the required pieces. You can also play with silly emotes.

Last month, the big epic free RPG for PlayStation Plus subscribers was Kingdoms of Amalur: Reckoning, and this month, we got another doozy brimming with hours of content. Alas, I probably won’t see much of it. For some reason, Dragon’s Dogma: Dark Arisen doesn’t fit properly on my TV, and even stretching it out is an ordeal, with the end result being sub-par. This makes for tiny text, tiny monsters, tiny inventory screens, and so on. I played about an hour’s worth of content, did a few missions, and recruited some Pawns to aid me in my quest to…slay the dragon that ate my heart? Sure, I think that’s it. I do, however, appreciate that you can play as a woman, as well as one with a bigger build.

Honestly, I had no idea Might & Magic: Duel of Champions existed until it did, and I went straight to it from Penny Arcade‘s Twitter account the morning it was released on Steam, curious enough to give the newborn a shot. I mean, I no longer have a circle of friends to play Magic: The Gathering with, nor the money it takes to stay current and in the loop, so a free-to-play card game based heavily on the same CCG mechanics is right up my alley. Because I still desperately want to play, and this, from what I dabbled in, seems really good. I did all the training missions and the first real “hands off” mission, and I like the mechanics a lot, especially the ones that differ from the more traditional MTG stuff. However, sometimes the opponent’s turn goes too fast, and I have a hard time keeping up with all the action.

Ahh. Yet another city-building game, but this time set in Medieval times. No, not the themed restaurant chain that I went to once as a wee lad, but rather the era. Oh, it’s also on my Windows 8 phone instead of something you’d get distracted by while perusing Facebook. Anyways, it has all the typical city-building and social elements that I experienced shortly in Little Big City and CityVille. Which is to say, there’s energy and only so much you can do in a single session. However, it holds a slight advantage over those previously mentioned titles because it has castles and soldiers and barbarians and so on. Plus, there’s Achievements to pop.

This is both very addicting and simple. and over the last few weeks has become my go-to game for when I have five or ten minutes to kill. Basically, you’re helping the Empire build a Death Star, opening up apartments and shops and other nefarious levels for people to spend money at to raise some serious credits. You take these citizens to their required level via an elevator, and watch everything grow. I’m not sure if there is actually an end point, but right now I have 12 levels and 23 people housed and working, with more to come. The cutesy pixel graphics and sampled tunes really make Star Wars: Tiny Death Star a fun, light-hearted game, one that maybe shows that Disney won’t ruin the franchise. Regardless, I’ll continue to keep playing until the Death Star is fully operational.

Tower defense, but with the focus more on action, on running and gunning, and you certainly play a bigger part than some dude who just places turrets down to do your dirty work. You sit in a Trench, which is like a mobile war machine that can shoot guns and build defenses. and a race of aliens called Tubes are trying to take you down. Naturally, as Iron Brigade comes from Double Fine, there’s an attention to style and goofiness here that is immensely enjoyable, like all the cosmetic gear you can equip your soldier with–hats, mostly. I’ve only done a couple of the early missions, but like it. Strangely, I find absorbing scrap to be therapeutic and rewarding, much like I had in Red Faction: Armageddon.

Earlier this year, everyone went ga-ga–and probably rightly so–over how the two boys in Brothers: A Tale of Two Sons could be controlled by both analog sticks. However, if it is anything like ibb and obb, I’m out. Honestly, I barely made it through the first few levels, and they were more than frustrating. More so, I got frustrated at my brain, as I kept getting the characters mixed up, forgetting what stick controlled who, and so on. Which made for faulty platforming. This game seems better experienced with one player controlling one guy, and an other the other. I doubt I’ll play any more, unfortunately. 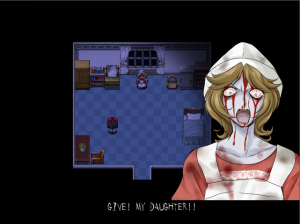 Um, I’m sorry. I really don’t know. I found a copy of Mad Father in my videogames folder on my laptop, so I guess I knowingly downloaded this at some point. Anyways, it’s a Japanese horror game that looks like an RPG from the SNES era, and I played a little bit before getting freaked out. There’s a lot of story up front with sepia-filtered flashbacks to boot, and no combat from what I experienced. You want to avoid these monsters. Also, a spoiler: the father is mad. And not in an angry kind of way.

Just a short and easy point-and-click adventure game about a witch trying to recover her stolen enchanted cash register. I had some time to kill before heading out for the Thanksgiving festivities yesterday, and so I gave this a spin. The puzzles are quite easy, mostly inventory-based, though you do also have to make a potion, complete a jigsaw puzzle, and shoot some ducks. I like the art and humor of it all, but for someone that just got robbed, Habla Kadabla–that’s her name–really needs to stop smiling.