Unsure of where to call home in Fallout 4 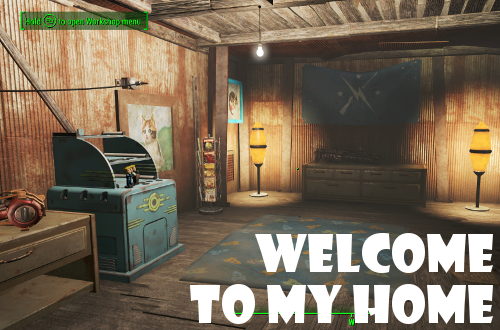 Fallout 4‘s tagline is “Welcome home,” but I’m not exactly sure where that is. At this stage, I’ve put in about 40 hours or so, and home, for most of that, was in Sanctuary, one of the earliest settlements you can come across and begin filling with people and reconstructing. However, I never felt one hundred percent certain that this is where I’d hang my proverbial hat–in reality, my Silver Shroud hat–and thus never stored anything anywhere there and only did the minimal amount of work to make it appear like I was one of the group. You know, built some turrets and a fancy chair for that drug-loving Mama Murphy.

In previous Bethesda open-world games, having a home was either something to figure out on your own or work towards via downloadable content as some non-essential side activity, though when I did the latter in The Elder Scrolls V: Skyrim‘s Hearthfire DLC it was after I had finished the main plot missions and completed the majority of things a Dragonborn dreams of doing, thus feeling ultimately unrewarding; plus, it was beyond repetitive. I remember finding “unowned safe spots” in Fallout: New Vegas, like Victor’s shack in Goodsprings, to store some of my heavier gear without fear of losing it permanently. I was, more or less, squatting and creating my own set of secret caches for somebody else to find.

Naturally, most of this searching and scouring for safe containers to hold all your Nuka Quantum and Daedric artifacts would be unnecessary if it wasn’t for…encumbrance. The dictionary defines the term as “a burden or impediment,” but we all know it as that age-old Bethesda staple, an annoyance that caps the amount of crap you can carry while still functioning like a solid warrior in terms of running and fast-traveling. From a logical perspective, sure, it kind of makes sense, though when you begin to scroll through the lists and lists of items in your Pip-Boy in Fallout 4, reality starts to crack in at the edges. There are ways around encumbrance, but the easiest is building a place of residency so you can swing by between missions to dump gear–or, in my case, dozens of coffee mugs–and restock before heading out once more…for more.

As mentioned before, previous games from Bethesda lightly sprinkled in bits of housing, letting those playing on PCs add more options via mods. With Fallout 4, it’s a full downpour of potential abodes from the get-go, some of which are actual entire settlements, sizable areas comprised of multiple homes for refurbishing. This is where deciding becomes important, because all the potential areas require an investment, both in time and resources. I’ve already dumped a decent amount of stuff into Sanctuary, seeing as that’s where this all began, but have now decided that a full-blown settlement is too much for my little heart to nurture. Instead, I’ve taken up base at…Home Base, which is a small, three-floored house for 2,000 caps in Diamond City, where the first floor offers the most room to plop down furniture and get creative.

You can see a glimpse of what my Home Base looks like in the picture at the top of this post. The first thing I built was the Bobblehead stand, which, for me, really cements that this is where I want to put my feet up at and decorate with as many cat paintings as possible. I like the addition of magazine racks, though the ability to spin them in-game would go a long way to making me smile. Other than that, I’ve hung a few flags, created a nicer bed, and placed all my Nuka Cherry on a shelf because that’s what cool people do. Haven’t decided yet what to do with the rest of the living space, but it’ll surely get filled in over time.

Still, there are some problems. I can’t send any of my companions to Home Base to hang out when not traveling with me; they only like settlements, I guess. Second, unlike the early promotional art for Fallout 4, which showed your weapons hanging against the wall on some kind of pin board, that sort of shelf is not available to build. Or I’ve not found it yet. This means that if I want to display any cool weapons I find, like the Fat Man, I have to simply dump them on the ground and then try to maneuver them just so on top of a table or desk. It’d be easier asking a Deathclaw for five bucks. You can switch to “building mode” to pick up and move items around, but that can be just as problematic, with some clipping through walls or vanishing the moment you drop them. Also, I found a really nice vase with a flower in it while exploring the Commonwealth, brought it to Home Base, placed it on the table next to my bed, and discovered it missing the next time I returned. Boo.

This is my first playthrough of Fallout 4, and knowing what I know now, I don’t imagine myself placing a lot of effort on having a place to call home the second time around, when I play as an evil, red-headed woman who likes to punch people and animals into smithereens. Maybe I’ll just abuse my companions to the point of weighing them down entirely with my full stash of weapons, mods, medicine, and coffee mugs. Maybe I’ll never pick up another single thing again and have no need for a place to store stuff. Yeah, right.

Where do you call home, my fellow Vault dwellers?