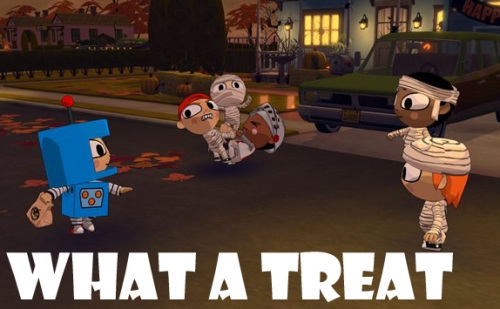 Surprisingly, it was not too weird to play a Halloween-themed game in the middle of April. Much credit can go to Easter, another holiday that seems to revel in chocolate and candy and disgusting things like peeps. Having now played and immersed myself in Costume Quest, I can safely say I would have played it during any holiday, candy-filled or not. Yup, even on Frog Jumping Jubilee Day (May 19).

Costume Quest is an adventure RPG set in Schafer County, starring one of two squabbling siblings: Reynold or Wren. It’s Halloween night, and everybody’s out getting their share of candy. Including monsters. Your sister (or brother) is mistaken as a giant piece of candy thanks to a crude candy corn costume and taken hostage by the monsters. Soon, a trio forms, and the quest to save your sibling starts, spanning three large areas filled with monsters, candy, trick-or-treatin’, sidequests, and funny outfits.

The most unique element is, unfortunately, not the game’s strongest. Costume Quest has a cartoony look, with cel-shaded characters and vibrant areas. When a battle with a monster starts, our little costumed kids transform into giant versions of themselves, becoming a Transformers-like robot, a valiant knight, and a spider French Fry to name a few. That last one sounds scary, but it’s actually pretty adorable:

Battles then play out in a turn-based fashion, with only a few abilities to select. A special move charges up after two attacks. When one of the kids attacks, there’s a mini-QTE that can power up your punch; without this element, despite how un-fun QTE is, the battles would be beyond boring. They’d basically break down into attack, attack, special move, attack, attack, special move. Health is automatically restored to all kids after every battle, too. I did not have any troubles with the monsters or bosses in this game, and that’s not gloating, just a fact. So long as you set the right Battle Stamps in place and constantly pay attention to every QTE, you’ll be a-okay.

Another irk, at least for me, is that the text moved too fast to read at times. Why not let me press a button to continue with the text after I’ve read it? I understand that a lot of this is done to keep cutscenes moving forward, but boo…I missed out on some dialogue, and that’s a shame as this is a really funny game. Double Fine knows its jokes, and many great one-liners come from knocking on doors and discovering a monster lurking inside. Speaking of that…

::knock knock::
NEIGHBOR: Who’s there?
PAULY: Trick or treat?
NEIGHBOR: Aren’t you a little old to be trick-or-treating?
PAULY: What? No, no.
NEIGHBOR: What’s your costume, anyways?
PAULY: I’m a struggling videogame blogger. Please give me a treat. Pleeeease.
NEIGHBOR: Fine. So long as you’ll leave.
PAULY: Yaaaaaay!

Costume Quest could be summed up as “baby’s first RPG,” which is not as negative as I’m making it sound; it’s very safe, very easy, very friendly. But dang is it charming. The story and characters and funny costume ideas carry the quest through and through; just don’t go in expecting a deep battle system or anything that could be described as epic. Not sure if I’ll go after the DLC Grubbins on Ice as it just sounds a bit like more of the same. 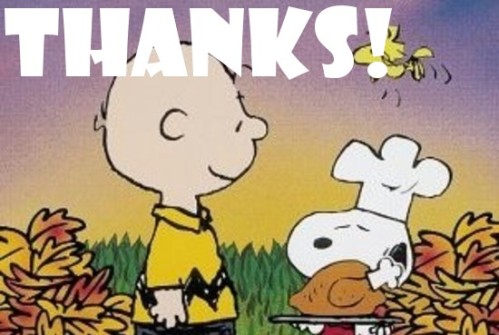 This week in the United States, it’s all about turkey, parades, football, and family fun. Better known as the holiday Thanksgiving, but I’d much prefer it dubbed Givingthanks, as that’s the point of it, a point which, seemingly, is undermined time and time again thanks to things like tryptophan and Black Friday shopping sprees. We’re supposed to be thankful—for family, friends, love, health, security, and, of course, videogames. Some might even consider them family and friends.

And so, in no particular order, here’s five games I’m eager to give thanks to for a whole bunch of different reasons…

Suikoden was the start of everything for me in terms of roleplaying games. I had sadly—and stupidly—missed the plethora of strong RPGs on the SNES and only dipped my toes into the genre once I got to the PlayStation. Think I tried out Beyond the Beyond and maybe something else before pre-ordering Final Fantasy VII and waiting patiently for it to hit its release date. To help ease the pain of waiting, I ended up picking up this anime-looking RPG called Suikoden for no clear reason I can recall. It just looked…interesting. And boy was it! Here’s what I ate up: a plot brimming with war and family politics and unforeseen death, as well as magic, an awesome castle that grew as your army grew, and a unique—at least to me—fighting system that encouraged combo attacks with like-minded allies. This game was pretty much the opposite of the eagerly awaited Final Fantasy VII; it sported sprites for graphics, focused on collecting 108 characters, and was smaller in scope, and yet I’m more thankful for its existence than that Square blockbuster. In fact, I’ve gone back and replayed Suikoden numerous times while Final Fantasy VII was last touched when I beat it back in late 1997.

This one sits extremely close to my heart. See, a few years ago, my mother and I were flying out to visit my sister in Arizona. I had, only weeks before, gotten a Nintendo DS Lite, with two or so games in my collection. The one I was currently playing while sitting next to her on the four hour flight was New Super Mario Bros., and I was actually just toying around with the slew of mini-games included within the main game’s cart. My mother leaned over and uttered some words I never thought to hear: “Can I try?”

So I showed her how to hold the console and use the touchscreen/stylus, and the rest is history. While out in Arizona, she just had to get a DS of her own (a pink one), as well as some games, such as Brain Age and Brain Academy and those kind. She still plays it frequently to this game, having built a good-sized collection of hidden object games, puzzlers, and interactive story-based games. For all I know about my mother, this was the first time she’s ever played videogames, and now we even have lengthy conversations about ‘em!

Super Metroid is a game that taught me how to pay attention to everything. And I do mean everything. Boss battle patterns, cracks in the walls, tiny crevices perfect for roly-poly Samus to roll through, the undiscovered parts on the game’s wonderfully intricate map. More specifically, I’m talking about that part where Samus has to watch some space alien critters wall-hop up a long stretch of map to reach freedom and then do the same thing herself. That required a lot of paying attention to. As well as trial and error. Still, to this day, I have trouble wall-jumping in that game. I can maybe go once or twice up, but hitting the third or fourth jump really requires a certain thumb-to-button rhythm not found in my veins.

As frustrating as this section was, especially for a young boy on the brink of insanity, I’m more than thankful for what it taught me. Patience and practice do make (almost) perfect.

Shadow of the Colossus

Speaking of patience, enter Shadow of the Colossus. This is the game that stands tall and proud behind the “are videogames art?” debate, as well as standing tall and proud on its own merits because it’s an absolutely phenomenal gaming experience. It’s basically a straight boss run, with each colossus a puzzle of their own. Like Super Metroid, this game really asked a lot out of the gamer in terms of paying attention. One had to first figure out how to get Wander up on the colossi. Then they had to get him towards its weak point, wherever that was, and then they had to stab a bunch of times and pray they didn’t tossed off like a ragdoll. If they did, well…you had to start all over. But each subsequent colossus was worth it, and conquering them was a mix of teenage jubilation and eerie sadness. I’m thankful this game made me feel so confused emotionally, more so than any other at this point, but I’m even more thankful for what it didn’t do. The world within is more or less barren, save for a lizard or eagle, as well as the titular colossi, which meant no mindless sword-fighting enemy troops. It also meant no sidequests or towns to visit or people to converse with. It was just you, the colossi, and the hope of saving a loved one. Shadow of the Colossus gets to the point like no other title.

Without Tetris, high school study hall would’ve been pure torture. Thanks to the power of nerds worldwide, everyone that got a Texas Instrumental calculator—so long as you knew someone who already had it on their calc—was able to play the legendary and seemingly unbeatable puzzle game from Russia. It worked just like the GameBoy version, but I don’t remember it having sound, which was fine and all, considering most of us were playing secretly beneath a trapper-keeper in class. It also helped on the bus ride to and fro. It’s biggest plus was that no one ever beat it; you just played and played the same few levels over and over again, each time differently thankfully enough, and that was all one needed from Tetris.

That’s plenty of thanks from me. Greg Noe, over at The First Hour, came up with a good number of multiplayer games he’s thankful for–do check out his article as well! Do you have any games you’re extremely thankful exist? Speak up!