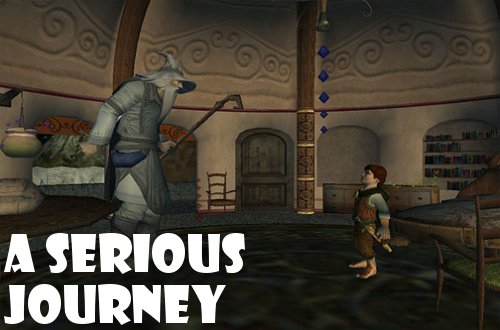 I know I’ve only played a Hobbit-sized amount of The Lord of the Rings: The Fellowship of the Ring at this point and already gave it a decent enough blurb in the latest Half-Hour Hitbox feature, but there’s just something about this PS2 game that makes me want to dive a little deeper into it. Writing-wise, that is. I’m still not sold enough to play further, unless someone wants to come over and show a Hobbit how to creep effectively. Plus, I have a really good “game over” screen to share with y’all later, so that’s a fine enough excuse to get me writing about more things related to Lord of the Rings. At least I don’t have to write the word LEGO seventy-eight times.

Anyways, like just about every other Lord of the Rings games, this one starts off in Hobbiton. Y’know, during the safe and quiet times before the long journey ahead. Interestingly enough, from a gameplay perspective, the first hour of the game is extremely dull. You play as Frodo, and you have a long laundry list of miscellaneous chores and fetch quests to finish up before you can leave the green grassy hills of your home for Lothlórien. Personally, I loved this, as you just explore Hobbiton, talk to your fellow neighbors, and learn a few things about what Frodo can do. True, he has a stick and can swing it, but I never attacked a single enemy so far; the game purports itself to be hack-and-slash action, so maybe when you meet up with Aragorn it’ll become more like that. For now, it’s sort of a free-roaming adventure game–fine by me.

Alas, the wandering back and forth had to end eventually. Once you’re done collecting mushrooms, helping neighbors with their multitude of problems, stealing from Farmer Maggot, and giving the deed to Bag-End’s new owner, you wait for night to fall, ready to leave the Shire with Sam to bring the ring to those pointy-eared treefolk. However, your journey is instantly stymied as a Black Rider, also known as Nazgûl, arrives, searching for its master’s ring. And here’s where everything fell apart. You have to sneak past the Black Rider, but you have no control over the camera’s verticality–you can only turn it left and right, which doesn’t help when there are big hills on all sides–so you have to wait until you see a shadow approaching to know where he is, and by that time, you are spotted and it is game over. The first time I died, I learned the hard lesson that many PS2 games do not auto-save frequently, and so I was set back about 30 minutes; we’re so coddled these days where games save when you even hit pause.

I died at the “sneak past the Black Rider” section three times before I gave up entirely and played some other PS2 game for a bit–if I recall correctly, I enjoyed some fifteen minutes of bot-heavy multiplayer in Red Faction II–and each time you die, you get this gloriously unedited game over screen:

As they say, one does not simply edit text all the way to Mordor.

Tagged editing, Frodo Baggins, game over, Hobbiton, Lord of the Rings, Lothlórien, LOTR, Mordor, The Fellowship of the Ring, The Hobbit