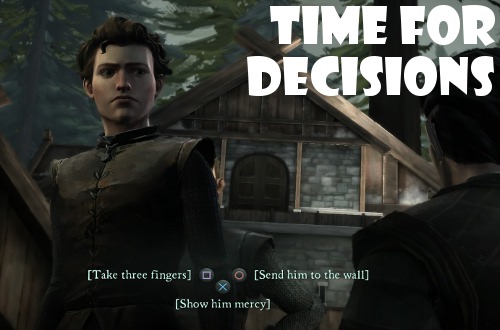 Well, I almost significantly spoiled my girlfriend Melanie on Game of Thrones over the weekend, which is something so bad that not even Ramsay Snow would consider doing it on the worst day of his wretched life. I am sorry, and may the Mother and the Father forgive me. See, sometime back, Telltale Games was offering the first episodes of its Game of Thrones, Tales from the Borderlands, and The Wolf Among Us series for free, so naturally I nabbed them all, figuring I’d get to them when I’d get to them. After the stinging disappointment that was season two of Clementine’s return to The Walking Dead, I was in no rush for more.

In my mind, I figured the Game of Thrones series was set during the early parts of the show/books. Mel has read the first two books–and a page or two into A Storm of Swords–and seen all of HBO’s season one. To my surprise, the game takes place smack dab in the middle of the third book, at the Twins. Seems like Lord Walder Frey is throwing quite the celebration for whoever is getting married that night. Yikes. Naturally, the game even uses the phrase “The Red Wedding” when setting the opening scene to hammer home the where and when. I immediately closed out to the Xbox One dashboard and then proceeded to turn on the PlayStation 3 for some more progress into Puppeteer, getting as far away from the Crossing as possible.

Later, I burned through the first episode “Iron from Ice” by myself, and I found it, much like with that other Game of Thrones game, beyond dissatisfying. For different reasons, of course, but I do have to wonder if this well of potential will ever get the right kind of treatment in the industry. Probably not. Personally, of the two that I have played, I figured this would be the better style suited to a world of poignant choices and larger-than-life characters. While that aspect is covered and pretty good in the moment-to-moment decisions, I was also hoping for more things to do around picking who lives, who dies, who you let live because you are weak and you know they’ll come back to kill you, and so on.

The story revolves around the northern House Forrester, rulers of Ironrath, whose members attempt to save their family and themselves after ending up on the losing side of the War of the Five Kings. House Forrester has not yet been introduced in the television series, but is mentioned briefly in A Dance with Dragons, so at least they aren’t just ::cough cough Riverspring cough:: making things up. Still, with the events post-TRW, House Forrester must make smart choices to keep themselves in the fight, and that’s where you, the player, come in, eventually controlling a number of characters in the family. There’s Ethan Forrester, who finds himself learning how to rule at a much earlier age than expected; there’s Mira Forrester, all the way in King’s Landing, who serves as a handmaiden to Margaery Tyrell; there’s Gared Tuttle, a squire who is off to the Wall to hide. I think later episodes give you others to play as, too.

Here’s my biggest problem with Game of Thrones, and it is the same problem I had with season two of The Walking Dead–it’s barely a game. It’s a choose your own adventure story, with a high emphasis on choose. Interaction is kept to a bare minimum, and you’re mostly left with dialogue choices. Basically, press this button or that button (or say nothing at all). I also found it difficult to roleplay these characters since I kept switching between them for different scenes; before, you had Lee, and every choice you made was reflective of the Lee you wanted to play as. Same for Clementine later on. Here, you get a short scene with Gared, then Mira, then Ethan, then Mira, etc, which makes it difficult to really grow them in my mind, learn who they are. I naturally tried to play each character the same, as an honest, hopeful soul in this grim world of brutality and betrayal. For many, it’s not going to work out well.

In “Iron from Ice,” I ran into zero puzzles. There are a couple of action scenes, where you have to hover the cursor over an item to grab and use it quickly, or swipe in a direction for some purpose, but that’s all early on and over with swiftly. At one point, while controlling Gared, I got to pick up two items from the room I was in–one was paper, the other some kind of plant or healing herb–and put them in my inventory, along with a sword. That said, you can’t select the items in the inventory or try to use them on other items or even people in hope of starting a dialogue. It’s a pointless list on the left side of the screen to make you think you are playing a puzzle-driven adventure game when, in reality, you are on a linear cart ride down the King’s Road. The other characters you play as don’t even have an inventory.

Kudos to Telltale for getting HBO on board to allow them to use the likenesses and voices of many of Game of Thrones‘ prominet characters/actors, like Cersei Lannister (Lena Headey), Tyrion Lannister (Peter Dinklage), Margaery Tyrell (Natalie Dormer), and Ramsay Snow (Iwan Rheon). It does help to sell the setting and soften the blow that you’re playing as a lesser-known family in the great big mix of things. Still, even on newer consoles, the gameplay is glitchy, with it chugging along from scene to scene, textures are slow to load in, and character models occasionally vanish from scenes without warning.

Telltale has certainly changed the point-and-click genre to a more modern, easy-to-swallow sort of experience, the kind that just about anyone can play–but it’s not for me. I want more interaction, more noggin using. I hate to say it, but this is exactly the sort of game I’m okay watching someone else play and then move on. I’m glad this first episode was free, but I’m also worried about how The Wolf Among Us and Tales from the Borderlands unfold. In my heart, they are all the same, and walking away from this company’s future output is one of the harder choices thrown before me as there’s a lot of like about the franchises they handle. Thank goodness there’s no timer.

House Forrester falls
Must do everything to thrive
Ramsay Snow, the worst