Well, lookie here. The year is done, and every single videogame that came out passed through my hands and by my eyes and got a firm, fair opinion. Er, no. That’s not true. Not the “firm, fair opinion” part, because I write what I feel and feel what I write, but rather the can’t argue with that fact that I simply cannot play every big or small game that drops over the course of twelve months. Perhaps one day, when I retire–you know, in something like fifty years, when people are playing videogames embedded in their eyes.

Right. Here’s a short bullet list of the previous entries in this annual Grinding Down fan-favorite feature (I think I’m its only fan, but that still counts):

With all that perfunctory introduction text said, onwards, towards the titles never to be touched, at least not until maybe next year or some time deep into 2017 when they are handed out as freebies on consoles or dumped together in a money-saving bundle… 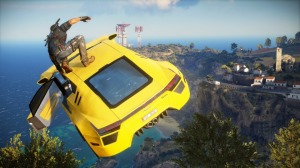 Considering I only began digging into Rico Rodriguez’s wild, chaos-causing antics in Just Cause 2 this past summer and haven’t even hit the 25% completion mark yet, I’ve got a ways to go before I try out that new, fun-looking squirrel suit in Just Cause 3. This new adventure continues to look like a fun time, but I’m in no rush to explore another mass of open, sprawling landscape with things colored red prime for exploding. I mean I could, but I shouldn’t. Not until all of Panau is fire and ash. 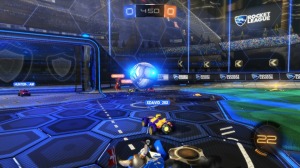 I’m only mildly interested in soccer, having been forced to play it a whole bunch as a young boy, and I’m even less interested in cars. Which is funny when you consider that I’m currently shopping around for a new ride. So long as it has plenty of cup holders and working AC, I’m good. But enough about that. Rocket League evidently fuses these two elements to create a futuristic sport that is fun as all gets. I figured that I’d just never play this, seeing as I sided with getting an Xbox One over a PS4, but rumor has it that it’s coming to Microsoft’s bulky console soon enough.

8. Dragon Quest Heroes: The World Tree’s Woe and the Blight Below

I love the Dragon Quest roleplaying series, but am even more fascinated with its spin-offs, like Dragon Quest Heroes: Rocket Slime and Dragon Quest Monsters: Joker. I’ve never played a Dynasty Warriors game, as these seem too button-mashy for my thumbs, but this one comes with all the iconic and goofy trappings that the RPG series is known for, as well as many smiling slimes to slice. Color me, at the very least, intrigued; plus, it has a wickedly weird title, something I cannot resist and which can only be shortened to…DQH: TWTWATBB.

I have the first episode on Steam thanks a recent bundle from Humble Bundle, but I still don’t see myself playing this over the next day or so. Regardless, of all the episodic adventure game series that were happening this year, Life is Strange seemed to be the one garnering the most interest. Probably for good reasons. I really enjoyed the studio’s Remember Me and its time-rewinding mechanics, which I know play a part of this game’s plot. I’m eager to see what terrible choices I can make and who will remember what.

While I might not have enjoyed the repetitive nature of Metal Gear Solid: VR Missions, I applauded the effort it took to stretch that content out into something bigger and better than just the ten or so training levels you easily handle in Metal Gear Solid. Volume seems to be a big fan of those levels too, at least from a style and gameplay mechanics perspective. Knowing full well how great of a narrative Mike Bithell was able to create for something like Thomas Was Alone, a simplistic-looking platformer starring colored shapes, I have to imagine there’s a good, cool-as-heck spy story to go along with Volume.

Over the course of 2015, I’ve played a few different match-three style puzzle games, some new and some old–and some of which I never even got to write about, though y’all already know my high and low thoughts on Frozen Free Fall: Snowball Fight and Pokemon Shuffle. That said, haven’t gotten around to Puzzle & Dragons: Super Mario Bros. Edition, which seems like your typical addicting match puzzle game, but smeared in all things Nintendo. I see nothing wrong with that. Evidently, this comes bundled with another Puzzle & Dragons game, one more slanted towards acting like a JRPG, and I see nothing wrong with that also. 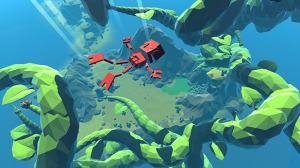 I’m not going to lie–I miss the days of character-driven platforming games, where the goal was often navigating an open space, while also collecting trinkets and thingamajigs to meet some required demand before hitting the exit. Every day I have to resist popping in my PS2 copies of Jak and Daxter or Ratchet and Clank, to remember what it feels like to jump from one colorful platform via a cartoony character to another. I assure you, it is satisfying. Anyways, out of seemingly nowhere, Ubisoft released Grow Home earlier this year, which stars a goofy robot growing vines and climbing higher into the sky. The graphics are stylish and colorful, and I am super curious to explore this world. Perhaps next year.

I don’t know much about Her Story, and I don’t want to know much about Her Story. That’s deliberate. From what I can gather, it is an FMV-driven adventure game where you play a detective, watching clips from taped interviews with a woman involved in some kind of crime. From there, it is up to you to don your deerstalker, take out a pad of paper and pen, and investigate further clips in a database by searching for key words and phrases. Sounds really awesome, especially since I’ve been listening to a lot Serial and watching Making a Murderer this week. The non-professional detective in me is eager to get to work and solve a crime with only my noggin. 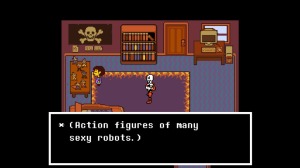 Alas, I have not lived up to many of my promises in 2015. I was hoping to finally see Final Fantasy IX through to its conclusion, as well as get farther along on the lonely path that is clearing out all the Metal Gear Solid games (more on that in a bit). After those promises, there was another one, unspoken, but beginning to blossom…one that has sat inside my chest since May 2015, eating away at my heart. See, that’s when I, at last, got hold of a copy of EarthBound (as a digital download on the Wii U), a game which Undertale, as far as I know, takes a lot of inspiration from. I’d like to play the former before I touch the latter.

I thought I was making good progress on getting through all these Metal Gear Solid games. In 2015, I finished replaying Metal Gear Solid 3: Snake Eater and experienced, for the very first time, Metal Gear Solid 4: Guns of the Patriots. In a way, I was on a roll, but then I hit Metal Gear Solid: Peace Walker. It’s not that Peace Walker is a bad game; in fact, it has some style to its cutscenes, but is perhaps bloated with far too many teeny tiny missions that take too long to complete, and everything is doled out at the pace of a snail on speed and too much caffeine. All of that is to say that I’m far from the end of it, and even then I still need to get through Metal Gear Solid V: Ground Zeroes before I dive into The Phantom Pain, which, from the little I’ve seen, is kind of similar to Peace Walker. Hmm.

So, there’s my list. Ba-dah-dum. It certainly contains some heavy-hitters from the last twelve months, though I’m just happy to not see Fallout 4 on here to tell y’all the truth. I’ll drop a few others that didn’t quite make the above cut, but are games I would have liked to try out this year, but did not: Ty the Tasmanian Tiger 4, Downwell, Happy Home Academy, Emily is Away, and Cibele. I’ll cut it off there for now because, really, truthfully, depressingly, the list is ever endless.

Now what about you reading this here blog of mine? Tell me a game or two that came out in 2015 that, for some reason, you didn’t get to touch whether because it is on a different console or your backlog is simply too massive or your mother declared it too violent for your pubescent eyes or whatever. Go on. Leave a comment. Curious minds want to know, and I’ll see everyone back here in December 2016 for another fantastically depressing list.