Everyone was going crazy for Grand Theft Auto V yesterday, which I guess makes total sense, considering that’s when it released to the foaming-at-the-mouth world. Personally, I’ve not been interested in GTA games for a long while, and my strongest emotions for the series revolve around Grand Theft Auto III, and that’s because I consider that–without a doubt–my college game. No other game save for Jak and Daxter: The Precursor Legacy, which came out a year later, reminds me so strongly of my dorm days, of long weekends avoiding papers and drinking the night away. Though the latter title also makes me think of shoulder-high snow walls and a desperate grab for mac and cheese, but I’ll save that tale for another time…

In 2001, I was a bright-eyed, bushy-tailed freshman in college, a hopeful art major at that, and my suite-mates got a copy of GTA III for their PS2 the day it dropped. At that time, I was still clinging to my PS1 and treasured copy of Tony Hawk’s Pro Skater 2, but college is all about sharing, and so we’d huddle together in our tiny, cramped dorm rooms and just lose ourselves in Liberty City, each taking turns never really doing any missions. It was all about stealing cars and running from the cops and watching your vehicle fall to pieces as your getaway plan went from grand to gravel as you smashed into everything in your way. That game encouraged emergent gameplay at every turn and rewarded you with a good time laughing like loons with friends.

Last night, I decided to remind myself of those golden days, popping in Grand Theft Auto III into my still-chugging PlayStation 2. Actually, first I checked my memory cards to see if I had any saved data on them, but alas, no. Not for any of my PS2 GTA games, which is a bummer as I distinctly remember getting pretty far into Vice City. Anyways, story-wise, the game begins with the silent criminal Claude being betrayed by his girl Catalina and getting arrested. After being sentenced to 10 years in prison, Claude  is transported across a bridge in a prison truck, which the Colombian Cartels fortuitously ambush. From there, Claude escapes and makes ties with the Leone mafia crime family as he tries to build himself back up in order to find Catalina and learn why she abandoned him.

I kind of forgot how purposely blurry the cutscenes in Grand Theft Auto III are. They actually really hurt my eyes, enough so that I had to look away during the opening moments, and I have to assume that 2001 Paul saw them as amazing and cinematic. After that, I found the game easy to pick up, and just as easy to go off the rails with, which is my favorite thing to do. I did the first few missions, which all act like tutorials. You drive and pick up a hooker, you drive over to some guy and beat the life out of him with a baseball bat, and you steal a car and get it repainted so the cops won’t know any better. After that, I drove around a bit, listened to some radio chatter, and explored the streets, which are pretty barren by today’s standards. Oh, and I noticed that the cars fall apart super fast. Like, two or three hits/collisions and you’re smoking and stalling in the middle of the road. Also, Liberty City is littered with trash. I think this was Rockstar’s way to try and fill in the empty spots, but it is weird to see the same piece of newspaper flittering by Claude every five seconds. We can also blame the limitation of the PS2 though, I guess. Maybe I’ll dip back into Vice City or San Andreas at some point, too.

Anyways, back to current affairs. Grand Theft Auto V looks like fun. Really, it does. I like the idea of three main protagonists that you can bounce around from to progress the plot and take on different mission types. But there’s a rub. I absolutely hated my time with Grand Theft Auto IV–not bothering to link to any specific articles, but if you search around Grinding Down, you can certainly find some less-than-praising remarks from me about Niko and the difficulty that game throws at you unfairly–and calling back to GTA III, a lot of fun is playing the game with others and being goofy or laughing at all the mistakes. That forthcoming online aspect might be ripe for that. Or maybe not. Until then, I’m more likely to pick up Saints Row IV first, which is more my thing these days: a weird, funny game that embraces its weird and funny bits and doesn’t need a room full of onlookers to be immensely enjoyable.

The problem with every game ever playing in GTA’s sandbox

In 2001, a little game called Grand Theft Auto III by Rockstar ushered in a new form of gameplay, what we now call “sandbox,” wherein you’re free to roam the world and do what you want until you actually want to play the dang videogame. It offered total freedom and had its pros and cons; some gamers couldn’t handle the lack of direction, would drive around for a bit, cause some trouble, and never dig into the story. That’s me. I lose interest fast. Others, I guess, did actually play the game straight through, undeterred, undistracted. Kudos to them.

With greatness comes imitation, and every game developer post-2001 wanted to dish out some of GTA III‘s pie. I know this for a fact because over the past two weeks I’ve played three different PlayStation 2 games that are basically GTA clones in terms of structure and gameplay, mini-map and all. One did not surprise me, but the other two…yeah. If only they hadn’t been so blatant about it. Right, let’s muse about these three cloned sheep.

Mafia. Fine, yes. Understandable. It wanted to be GTA III in a different time period with a focus on the under-workings of the mob. No surprise here, and I do appreciate that the developers placed an importance on obeying the posted speed limits. The HUD is a bit clunky and cluttered, and the city streets are so devoid of life that one must ponder if the developers actually forgot to program in day-to-day citizens.

Wallace & Gromit: The Curse of the Were-Rabbit. This didn’t reveal its GTA III-ness until after the tutorial missions were done. Then we’re dumped into a hub world based around the duo’s terrace house on West Wallaby Street. It’s then split even further into four areas: The Town Centre of Wallersy, Grimsley Harbour, an industrial area, and Tottington Hall. You walk around and pick up missions from select neighbors, which appears as colored dots on your mini-maps. You can’t highjack vehicles in this one; if I could, those deranged rabbits would be roadkill sooner than later. 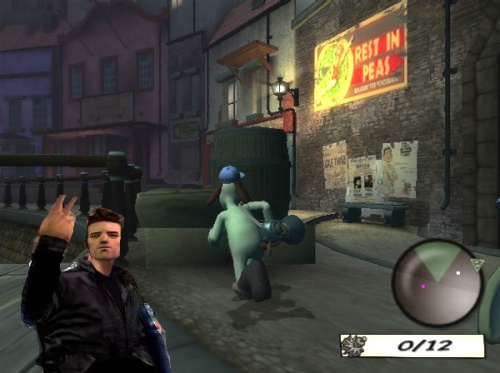 Ty the Tasmanian Tiger 2: Bush Rescue. And here’s where it gets sad. I had a wonderful time with the original Ty game, which was yet another platformer during that crazy platformer-led era, but it was a solid time, with a strong focus on collecting, as well as exploring the levels high and low. I popped in Ty 2 last night now that I have extra memory card space for it, and I was shocked to discover the franchise’s formula changes, going from a focus on collecting to mechs. I’m fine with the mechs, really. But it’s all set in a giant hub world that you can explore as you please, with vehicles to help get you from one place to another. But man, I played for over an hour last night, and I did like seven side mission thingies, leaving the main storyline to the Australian side, which has me worried that the emphasis is not on taking down Boss Cass again, but doing mindless tasks for mindless friends. Let’s hope not… 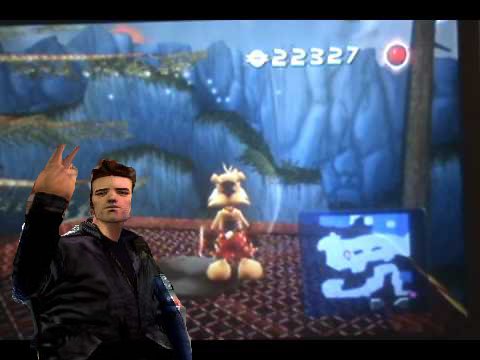 Claude Speed may give his approval, but I’m so exhausted over mini-maps at this point. BE YOUR OWN GAME.