^_^ will shout at you until you are a smiling fool 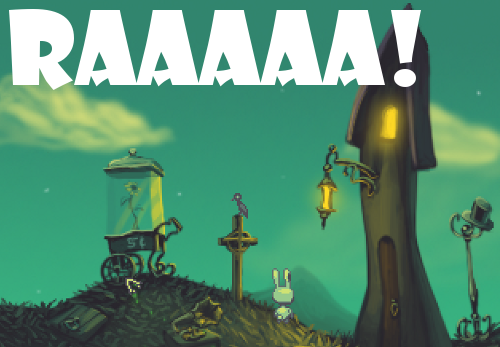 I can understand that this blog post’s title might be a little confusing to read, but that’s how it is. Like Prince’s unpronounceable Love Symbol #2, ^_^ is a name that’s easier to type than say outloud. In my mind, I refer to it as Smiley Face or The Wererabbit, but your mileage may vary. However you want to say it can be argued this way and that, but one thing is clear: y’all need to play this.

I discovered ^_^–and subsequently further work by Ben Chandler–from the Gnome’s Lair blog, which focuses its coverage heavily on point-and-click adventure games, a genre that I’ve been enjoying more and more thanks to my recent times with Monkey Island 2: LeChuck’s Revenge and Broken Sword: The Shadow of the Templars. Initially, I was attracted to ^_^ by a single screenshot, which, almost immediately, made me want to click on everything, from the cart to the crow to the coatrack. Turns out that single screenshot makes up the entire space of the game, so it’s a relief that it is simply gorgeous. The lighting on the grass from the lamp is worth noting.

So, Julian is a wererabbit–the first of his kind, too–but wasn’t always that way. He’s trying to get a witch to help change him back, but first, he must retrieve her hair, which keeps running away from her. Also, there’s a verbally-challenged vampire and enough jazzy records to keep one from selling their ol’ gramophone for one of them newfangled cee-dee players. Yeah, it’s kind of weird and random, but cohesively sound, with a clear goal to achieve. Puzzles involve a lot of clicking and dialogue options and using the right item from your inventory at the right time and place. Standard adventure game stuff, but it’s all very charming here. My favorite running gag within ^_^ is all the shouting, which also nicely plays a pivotal part in getting that magical hair back to its master. The small addition of a screen shake each time is quite effective.

I played for about an hour last night, getting stuck a couple of times. ^_^ is no walk in the park, or a walk outside a witch’s house at that. Trial and error will get you there, as well as paying attention to how the game operates early on. Generally, if Julian uses a certain trick to advance the plot, he’ll do it at least once more before credits roll. Oh, and speaking of credits, Chandler handles them as nothing more than in-game dialogue, which I found pretty amusing and appropriate. After that, the game ends. It literally shuts itself down, leaving you left to stare at whatever image is gracing your desktop, heartstrings tugging for just one more thing to click on.

^_^ is a charming short story, with many moments worth remembering. The graphics and animations are surreal and surpass many quote-unquote professional games of the same ilk, and the funny moments are genuinely funny. Play it for the vampire tongue-twisters and all the shouting and the revelation from where the game gets name. Play it because it’s freeware, but made with skill and style. Play it.