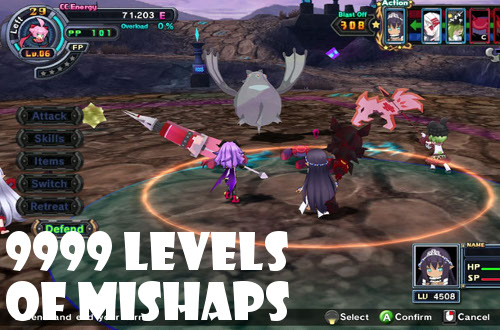 For some reason, I thought Mugen Souls Z was an anime-based fighting game, something like Persona 4 Arena, which meant I could pop into it quickly, play a few matches, uninstall the beast, and write a few words related to the game as per my Paul’s Preeminent PlayStation Plus Purge feature. Alas, I was mistaken as this is a big-as-they-come JRPG, bursting with story, characters, more story, and some turn-based fighting, along with general elements of perverted skeeviness that I’m not down with. It’s not a hentai game, but it isn’t too far off in some aspects. More on that in a bit.

In Mugen Souls, the main protagonist Chou-Chou plans to conquer the universe by subjugating the seven worlds it comprises, as she thinks the planets look pretty. Traveling from world to world with her trusty companion Altis and loyal peon Ryuto, Chou-Chou aims to turn the heroes and demon lords of each world into her personal servants, saving the world from conflict in the process. That’s all fine and good, but none of that matters anymore because I’m playing Mugen Souls Z, which is the sequel to Mugen Souls, released in North America on May 20, 2014, for the PlayStation 3. The protagonist in this one is Syrma, a goddess aiming to stop an awkward ancient threat.

Mechanically and visually, as far as I can tell, Mugen Souls Z looks almost identical to its predecessor, but with some improved presentation bits. It’s got a cutesy look to it, with bright colors and bubbly personalities. You are not bogged down immediately with a hundred and one tutorials, as they are instead spread out over the first few hours, but even still, I found it to be a lot of concepts to juggle in my brain, from hitting crystals on the battlefield to turning enemies into peons and so on. The gameplay is also similar to the original; players will travel from one world to the next, finding spots on the map that will ask them to perform actions, such as handing over a certain item, using a certain fetish/affinity to flip their switch, or fighting a specific amount of monsters. Otherwise, you spend a good amount of time in G-Castle, which is both your flying spaceship that can transform into a big robot and your hub area full of shops and things to interact with.

Battles are somewhat tactical and turn-based. You can move around your party based on a circle, positioning them for maximum damage or even hitting multiple enemies at once. Each arena has a set of crystals, which, when activated, grant boosts or have negative repercussions. These allow for a certain level of cleverness on the player’s part, meaning that you can position yourself in such a way to literally cut damage in half while also boosting your own magic power. It’s a simple concept, but one that I still haven’t really figured out how to trigger. And no, I don’t want to go back and read the 15-page tutorial on it.

Ultimately, here are the things I liked:

Mugen Souls Z is way too talky for me. I’m not against a lot of dialogue, but much of it here feels unnecessary or repetitive. It took about two hours just to get to actual gameplay. Also, this is a very Japanese RPG, meaning that there’s a strong focus on fetishes, bouncy boobs, upskirt shots, and steamy bath scenes. Heck, the first piece of armor that you’ll unlock is underwear, and you’ll be able to accrue others as you play. I personally don’t know the ages of the main characters, but they look young to me, even as gods, and it’s extremely off-putting. I’m sure there’s an audience for this game, but I’m not part of it. And so it goes, uninstalled, never to know what ultimately happens to Chou-Chou, Syrma, and their friends. Maybe it is better not to know in the end.