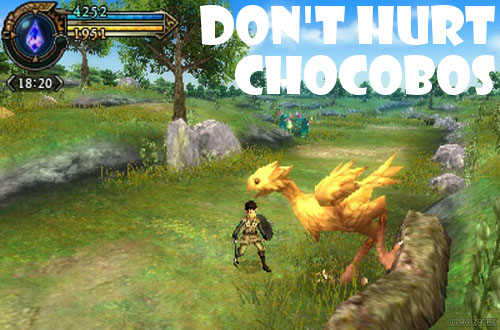 At the beginning of 2018, I was real close to getting Monster Hunter: World. In fact, it’s now the beginning of 2019, and I’m still thinking about biting the bullet. It’s a genre I’ve always been intrigued by, but terrified to get into due to what seems like a massive amount of complexity and menus and history to learn. However, this newest iteration, which jumps from the realm of handhelds to big boy consoles, seems to be somewhat more friendly to people like me. Or what kids back in the day referred to as n00bz. Side note: if you know what kids refer to people like me nowadays, please let me know ASAP. However, instead of getting this, I dug through my Nintendo 3DS collection and found something similar called Final Fantasy Explorers. It both compares and does not compare.

Final Fantasy Explorers is an MMO-lite that revolves around the titular group of explorers from the rural town of Libertas who hunt the world for crystals, objects which are the source of life and civilization for the world. The most major source of crystals is the new island of Amostra, but they are guarded by fearsome beasts that the explorers must fight. So yeah, surprise, surprise–it’s another Final Fantasy game dealing with crystals as the magical MacGuffin, but then again I wasn’t expecting much in terms of story from a Monster Hunter-like game. They generally are about fighting big monsters and crafting cool gear from their dead, shredded body parts. Also: cats cooking.

For the most part, the combat, which is the bulk of what you do in Final Fantasy Explorers other than stare in horror at confusing menu after confusing menu, is pretty solid, even though one of the shoulder buttons on my Nintendo 3DS is not working properly. It’s a bit hack and slash, with some spells and special abilities thrown in for good measure. To start with, Final Fantasy’s signature job system is here, which adds variety to the battles by letting you equip a mishmash of weapons and abilities tied to your chosen profession while in town. Spells and skills can be tweaked and tailored however you want using special mutations learned in battle, which can make them much more effective, so there is plenty of customization to work with. Personally, from my three-ish hours so far, I’ve been sticking with the Freelancer job, which is kind of your all-around job, capable of both casting basic spells and also wielding decent weapons for physical attacks. Alas, I’m currently stuck trying to beat the legendary flame djinn known as Ifrit.

Let me get more detailed. By default, you have a simple, quick attack that you can mash; however, squeezing the left or right bumpers grants you access to one of eight hand-picked abilities–some magical, some physical, and some related to your current job and weapon. The best strategy is to chain all these abilities together to begin building up something called Resonance. Once you have enough, you can squeeze both bumpers simultaneously and select one of four crystal surges, which supercharge all your abilities for a limited time. This is wisest done during boss battles, as most of the generic enemies you fight along the way are easily dispatched with simpler attacks.

Like Monster Hunter, Final Fantasy Explorers is probably meant to be played with other real-life people in your party. I don’t have access to those kinds of friends; I’ve only ever played online on my Nintendo 3DS with Animal Crossing: New Leaf and some cooperative multiplayer thingy for Luigi’s Mansion: Dark Moon. Thankfully, solo players get the ability to gather essence from some downed monsters and create your own monstrous allies, who will wander after you and join you in combat. Unfortunately, their path-finding is terrible, but you can fuse them other monsters and materials to up their level or unlock perks. I currently only have one monster following me, a level 8 goblin that carries a large cleaver. What’s nice about this is that you can basically recruit your favorite Final Fantasy monsters, such as Cactuar, TonBerry, or Chocobo, like they are Pokemon. Fine by me.

Look, I haven’t played a whole ton of Final Fantasy Explorers yet, and I plan to give it a few more hours, but I can already begin to see the grind here. The real hook for me is seeing all the things from various Final Fantasy games on display, such as summons, characters, spell names, etc., plus the option to basically dress up your avatar as, say, Sephiroth or Tina. If this ultimately doesn’t do it for me though…there’s always Monster Hunter: World.