Everybody loves Raymus, not Reemus 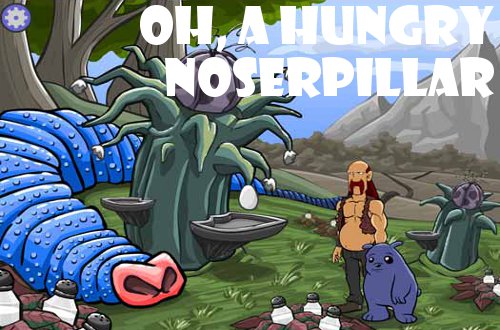 In The Ballads of Reemus: When the Bed Bites, one simple bug job leads to many bugs and bigger problems, and Reemus and his companion Liam, a purple bear that plays the lute, are all to blame. Naturally, it’s now up to them to save the town and do mundane tasks for people to get key items that will help them move forward with their exterminating business, as well as put them in the limelight, the perfect spot for the stars of a ballad or two. Unfortunately, everybody in Fredricus loves Raymus, Reemus’s more successful brother, and so the unlikely duo have a lot to prove.

When the Bed Bites has a certain familiarity to it, and I think I’m just digging deep into my point-and-click gaming history and recalling the fond time I had solving puzzles in Blazing Dragons, though the humor found there was ten times more British. Still, both games are extremely colorful and filled with zany, wacky characters and fun, Xanth-like ideas, such as the noserpillar, ice cream cactus, and the condiments forest, which shows that the people behind it aren’t afraid to open up their imagination for all to see. It definitely made getting to a new scene all that more exciting because, truly, anything could show up.

The game is divided into a number of scenes–maybe eight to twelve in total, and if I was a better game journalist I’d work harder to confirm the actual number, but meh, it’s almost time to take a holiday break–and each is its own contained mini-adventure, which I appreciate greatly. You’ll find all the items and puzzles that need those items for solving in one scene only, so you don’t find yourself still holding an unusable flyswatter by the end of the game. These tiny story arcs play a continuous part of the whole story–which is Reemus and Liam trying to right their wrongs and get people to listen to their ballads–but make for convenient gaming, as I played When the Bed Bites in three separate sittings, never feeling exhausted or lost.

Puzzles range from unbelievably easy to fairly difficult, though sometimes the fault was mine, and I just didn’t try clicking on every combination possible. In certain scenes, you can switch between Reemus and Liam to have each handle their own slice of puzzles before reuniting. Occasionally, I found it difficult to call out the interactive objects from the backgrounds, and I ended up stuck in the condiments forest for a good while until I realized that to get the metallic bark for cooking that sweet, savory bacon, you have to click near the bottom of it, as clicking towards the top only gets you an item description. Also, due to the developers doing a bang-up job of really hiding their hidden item: was unable to make the seagull’s headstone or finish the moth’s poster, both missing two pieces before I moved on. Thankfully, you can pause the game at any time and bring up a walkthrough from the options menu that doesn’t spoil story stuff, but guides you in the right direction for puzzle solutions to keep things moving. I will admit to using the walkthrough several times, though I kind of wish it didn’t open to a separate browser window and was contained within the game itself somewhere. Immersion must be kept.

Audio-wise, I found the game’s soundtrack to be pretty pleasing, save for one song near the end that was repetitive and slow to build, and even after it went somewhere, it was still the same notes over and over and over. It’s the kind of light, fantasy tunes you’d expect to hear at your local Renaissance fair. Liam and another bard early on sings some silly songs, and they are short and enjoyable. However, the voice acting throughout didn’t sit well with me on a constant rate. I found the leading man Reemus sounding a bit too Steve Blum, which did not match the art, and there are some Irish-sounding lovebirds that seem really out of place. And a lot of the female voices are overdramatic and absurd, almost as if men are trying to do a woman’s voice. Surprisingly, Liam the purple bear’s voice was perfectly acceptable and easy to listen to. Sound effects are minimal overall, though the squish sound for finding the hidden bug collectibles is pretty satisfying, even in a gross way.

For those that don’t like reading, you can watch me play some When the Bed Bites in this “Paul Plays…” vid, but be aware that you can’t really hear me too well when I foolishly attempt to talk over some of the game’s dialogue, which is very loud. Balance, balance, balance–it’s tough to get. Again, I’m still learning. But please take a look/listen nonetheless: