I finally understand the whole “Would you kindly?” thing 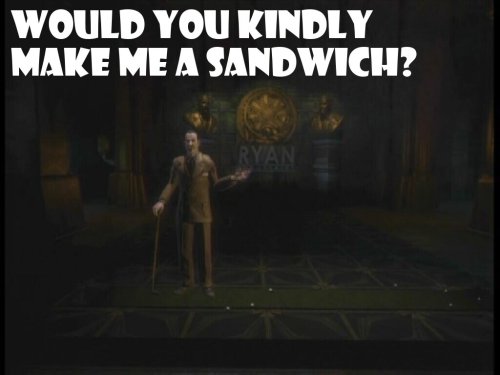 But yeah, “Would you kindly?”

This is a phrase I’ve seen tossed around on forums and Interwebz postings all the time, and thankfully, I never investigated further. I mean, I knew from what little I previously played of BioShock that Atlas said it a few times, and I chalked it up to be a stylistic quirk of his. Little did I know, little did I know. It’s pretty neat that this, these three wee words, is actually pivotal to the plot, to Rapture.

We’re always being told what to do in videogames: collect seven stars, defeat the evil wizard, find a way out, drive Mumbo Jumbo to his apartment, bring someone the head of the youngest cabana boy, and so on. It’s refreshing to finally have a game reference this; not only reference this, but bend it, break it, make it their own twisted weapon to justify the means. Ultimately, we’re going to keep playing BioShock regardless of what Atlas wants, which is exactly what the developers are banking on, us hamming it up in the palms of their hands, completing the circle.