SMT IV’s Minotaur boss is one loud wake up call 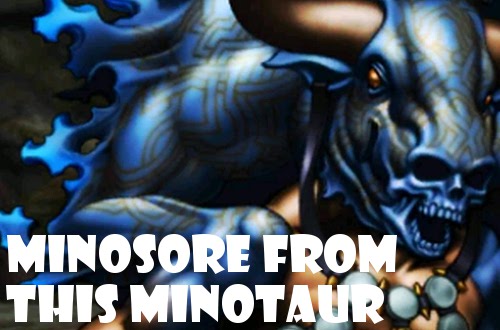 After dying four times during the tutorial section of Shin Megami Tensei IV, I’ve succumb to the blurry darkness a bunch more since then. Probably too many times to keep counting, actually. For a few of those deaths, I revived myself by paying Charon a hefty sum of Macca; other instances saw me just reload to an old save, losing a bit of progress, but keeping me out of downward spiral of debt. I now have the option to use Play Coins to return to the land of the living, but asking for nine is a bit too steep for my shoes, especially when I need to conserve them for Animal Crossing: New Leaf and Find Mii II. So yeah, life as a Samurai is hard, which I should have expected from my earlier time with Devil Summoner Overclocked, but I didn’t realize just how fast and cruel the Press Turn system can be, despite how enjoyable it is when it operates in my favor.

It all becomes clear when you reach the Minotaur boss fight, a few levels deep in Naraku. He’s weak to ice spells like Bufu, and you can get quite a few hits in before it is his turn to attack, but once he does…well, he wipes out my team in a single sweep thanks to the Press Turn system and smirking. I’m not sure exactly if I’m doing anything wrong specifically or chuck it up to bad luck, but it’s been a roadblock for sure. I’d say I’ve taken him on maybe five or six times now, just reloading an old save instead of going into debt with Charon. Boo and grrr and I’ll get you yet, you disturbing piece of Dali-esque artwork.

Until I’m strong enough or lucky enough to beat the Minotaur, I’m grinding and doing side stuff. Like collecting gryphon tails. And downloading free items from the store. No, wait. I’m actually downloading the quests that will allow me to gain these items, but they still require work/items, like 10 or so Life Stones. Every now and then I pop into the Cathedral of Shadows to see what I can do with fusion, but that place is scary and I’m always worried that I’m going to waste a good demon unit to create a subpar one. Right now, I’m rocking…you know, I can’t remember their names specifically and don’t have my 3DS open to check. Hmm, one is the weird connected horses beast. The other looks like a boar. I’m sorry, I just don’t have space in my brain to remember what these crazy critters are called, not when that information is fighting against Game of Thrones theory details and all 108 Stars of Destiny. Also trying to save up all my App points so I can buy the “recover MP while walking” one, quickly followed by “recover HP while walking” right after it–those seem like must-haves.

I’ll be back soon, Minotaur, to try again. If you have any handy tips on how to knock him out fast, please share. I don’t want this to be a permanent roadblock. 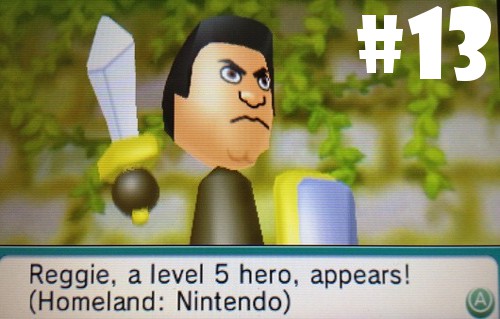 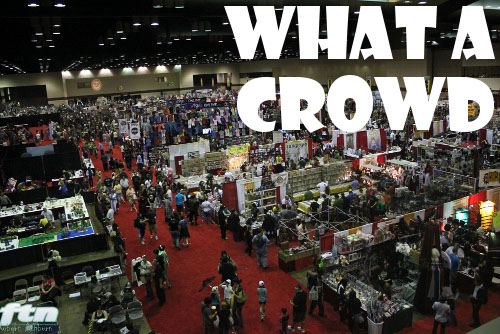 I’m back, dear Grinding Down readers. Thanks for waiting on me. For those that didn’t even realize I was gone, well…you stink. I was down in sunny Florida for some days there, selling minicomics and eating at places with nifty names like Tijuana Flats and Which Wich. It was a nice time save for all the driving. Actually, the driving down was fine. It was the return trip home that was grueling.

Now, only two people participated in my little contest where you could guess how many StreetPass tags I’d get at a three-day, very popular comics convention. One was my wife, the other a good online friend. Shame on the rest of you for not participating, as you have now missed the chance to hold total power over me for one entire blog post. Anyways, here is their guesses:

Well, last night, with a fat cat sleeping on my back, I took the time to count up all of my StreetPass tags from the weekend, and the total is pretty surprising. Ready for it? Ready?

Woo. Ba-boom. So, that means Tara wins, and she’ll let me know what she wants me to moan and groan and go on about at length when she’s ready. Hopefully it’s not Sailor Moon.

But man, 168 tags in a three-day span does some magical things for one’s Mii Plaza and the minigames found within. One, I was able to complete five more puzzles, as well as collect all of the tag-only puzzle pieces. I’ll probably be able to finish up the remaining puzzles in April at MoCCA; I don’t like using my Play Coins to buy puzzle pieces, as it’s more fun to collect them from other 3DS owners. Two, I filled out my map a little more, meeting people from all along the East Coast, as well as someone from Anguilla, which is so rare that it doesn’t even get a picture for it. Third, made some sick progress in Find Mii II, getting all the way to the final boss, and by final boss I mean the boss after what many probably assume is the final boss. Still chipping away at it as that level-down gas is no fun at all. Then I get to replay it all over again, choosing a different path from before to get more hats. MOAR HATZ.

But getting all these tags and grabbing new puzzle pieces was great for filling in the gaps at MegaCon when nobody was stopping by our table. Aw, sad faces. Really, that was only on Friday and late Sunday. Saturday was slammed with busy, busy, busy. Sometimes I was actually clearing out my Plaza Gate under the table, because if you got ten Miis in there you couldn’t collect anymore visitors–and I needed to collect as many as humanly possible.

The next big tagging event will be at the end of April for MoCCA Festival in New York City. I’ll hold another guessing contest around then, and hopefully more of y’all will play along. Gotta think of a bigger prize. Maybe I’ll offer up my pristine copy of Suikoden II? Naaaaaaaaaaaaaaah.

I thoroughly enjoyed the first Find Mii. It’s one of two minigames found within the StreetPass Mii Plaza for the Nintendo 3DS, and the quickest and easiest way to sum it up is a bare-bones RPG that rewards players with new hats for their Mii. Your Mii is captured, and you have to recruit other Miis via connecting with 3DS systems or purchasing cat/dog soldiers to fight off ghosts and save your Mii. Which turns out to be the king/queen of this unnamed fantasy realm. Options for combat boil down to attacking three times with a sword or using magic; there are one or two moments where strategy is vital for progress, but otherwise, so long as you can boost your heroes’ levels or connect multiple times with other Miis, it’s easy sailing. But at least it’s something to do with the Miis you collect other than, y’know, grabbing a random puzzle piece–and sometimes not even that.

I made a huge dent in Find Mii back in September thanks to attending SPX 2011, where a good number of other 3DS champions attended, too. I basically plowed through my second playthrough of the minigame up to the point of the final two or three battles thanks to other comics-loving Mii avatars, especially Madéleine Flores. Then I kinda stopped carrying my 3DS around all the time to collect Play Coins and hopefully tag other people, and so I was a little miffed to discover that the minigame’s sequel, Find Mii II, newly acquired with the latest software update for the system, is only accessible to those that had collected all the hats already. Meaning, I had to blow a bunch of Play Coins just to complete the first adventure and begin to see how the second one shaped up.

So I did that, and now Find Mii II is in progress, and while it is the same minigame as before, it’s also not. It’s Find Mii, but updated to the max. Beyond eleven. It throws in so much new stuff that it’s actually hard to remember it all, but I guess that’s why I blog, to make words permanent and visible and possibly interesting.

Story-wise, your Mii’s children, wig-wearing pieces of epic royalty, have been kidnapped, and you must rescue them. I think your own Mii is taken, too, but I can’t remember. I was a bit hypnotized by seeing my kid represented as a blonde wig-wearing version of myself. Players can now take multiple paths through a dungeon, resulting in different challenges and acquired hats.

Combat used to involve two strategies: melee attacks or magic. Both had their uses, but other than that, there weren’t many other options. Now Mii soldiers can used combo attacks based on the color of their shirts or fuse into one leveled up soldier. Here’s what is known so far:

Did I mention that you can also use Play Coins to hire a Mii in your plaza to fight for you? Well, you can. It’s pricey, but worth it when you got some level 4 Miis standing around collecting e-dust. And also comes in handy when you reach a room that requires a certain colored shirt Mii to progress. Some enemies require strategy too, since I’ve come across a ghost that makes a mirage copy version and a slime that heals itself if you’re not effective enough.

Potions are new, too. You purchase them with Play Coins during combat, and here’s the ones I’ve seen so far:

Whew. See? A lot of shtuff.

Considering there’s an Accomplishment for completing Find Mii five times and multiple paths to take, I suspect I’ll be plugging away at this for some time now. Looking forward to the 2012 comics con scene for more tags so that I can show everyone my sweet Laytonesque Top Hat. I’m sure there’s a lot of other cool hats, but for me, that’s all my Mii needs.