Final Fantasy VIII has always been great, weird, and underappreciated 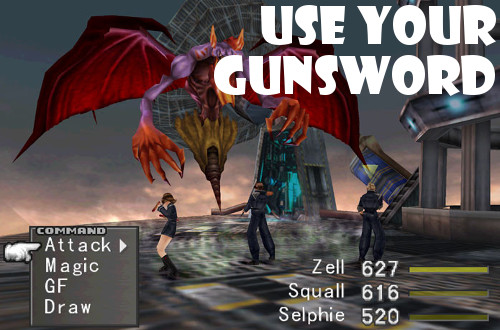 Final Fantasy VIII was released on the original PlayStation 1 on…February 11, 1999, meaning it is now twenty years old, almost ready to booze it up, give or take a day or two depending on when I get this post uploaded. Either way–congrats and that’s totally insane to me, but I guess time has always had a way of sneaking up on ourselves. What else came out in February 1999, you ask? Allow me to do some quick research. A few choice answers include Street Sk8er, Sid Meier’s Alpha Centauri, Beetle Adventure Racing, and Star Wars: X-Wing Alliance, all of which scream instant classic from the mountaintop. This was definitely the cream of the crop at said time.

Before I get into the meat and potatoes of Final Fantasy VIII, allow me to tell a story. I never finished the game, but I got real freaking close; see, towards the end, as you prepare to take on Ultimecia, you need to split into multiple parties and I had unfortunately focused on leveling up only three characters for most of the game, not knowing I’d be thrown this curveball. Specifically, Squall Leonhart, Selphie Tilmitt, and Quistis Trepe. So, the other team was certifiably boned, and I couldn’t survive a single fight nor reload to a previous save to grind them up to somewhat more respectable levels. Oh well. Also, afterwards, I was letting a then-friend of mine borrow the game to play, giving him it disc by disc; well, he moved away with Final Fantasy VIII‘s second disc so there’s no way I can replay my original PS1 copy, though it has been released on Steam and as a digital download on the PlayStation 3. Not all hope is lost, if I ever feel the need to dive in again.

All right, on to the plot. If I can summarize it well enough, that is. Final Fantasy VIII is set on an unnamed fantasy world and follows a group of young mercenaries, led by Squall Leonhart, as they are drawn into a conflict sparked by Ultimecia, a sorceress from the future who wishes to compress time. During their quest to defeat Ultimecia, Squall struggles with his role as a leader and develops a romance with one of his comrades, Rinoa Heartilly. Squall is a cadet at SeeD–which I never knew how to pronounce; is it seed or seedy?–a special combat unit of the Balamb Garden Military Academy. The game is a strange mix of high school drama and battling real-life monsters, with a punch of romance and time bending and long pauses. It’s weird, but that never meant it wasn’t interesting and a fresh breath of air after the somewhat traditional-looking Final Fantasy VII.

Now, I remember being initially disappointed with the Draw system. See, in Final Fantasy VIII, magic spells aren’t purchased in shops like in previous games. Instead, the most common way to get spells into your arsenal is by drawing it directly out of enemies. This cost your character a turn, and I hate wasting turns, which is why I’d always prefer to cast an aggressive spell, such as Firaga, instead of a buff spell, like Protect. Also, you could gain magic spells via draw points or by refining magic from items. Still, it felt like an unneeded step in the process; to cast Cure, you first have to draw it from an enemy and then wait your next turn to use it. It’s probably not as big of a deal as I remember it being, but I know many players wanted something a little more straightforward from the battle system.

Perhaps the greatest thing to come from Final Fantasy VIII is its mini-game Triple Triad. This is a digital card game conceived by battle system designer Hiroyuki Ito. In it, two players face off against one another, one side playing as “blue” and the other as “red” on a 3×3 grid. Each player has five cards in their hand, and the aim is to capture your opponent’s cards by turning them into the player’s own color of red or blue. Cards have different levels, with low level cards having low ranks, like 1s, 2s, and 3s, while high level cards have 8s, 9s, and 10s, and some cards are considered “rare,” usually obtained from tough opponents or side quests. I loved playing this minigame so much that I eventually began to draw my own cards and play against invisible opponents just to practice in between grinding sessions. It’s also in Final Fantasy IX.

There’s probably a lot more I could say about the game…if I could remember more. Alas, it’s a wash, having last played the thing in high school. Still, I’ll put this forward. If you think Final Fantasy VIII is the worst entry in the series, I have two things to say to you: 1) you’re wrong, and 2) whatever.