Rolling dice never changes with Fallout: The Board Game 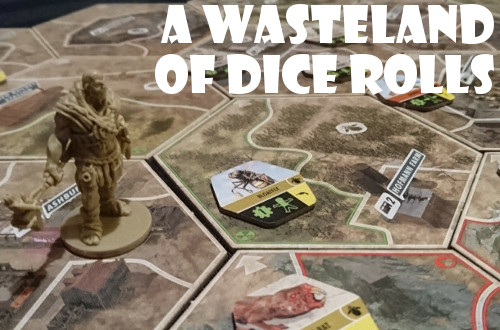 I am still surprised to this day that I did not fall head over heels in love with Fallout 4. I mean, I like it well enough, but the obsessive amount of exploring I did in Fallout 3 and Fallout: New Vegas never reared its pretty head in the same way, and I’ve tried going back to the campaign about finding my stolen son and defeating–or teaming up with–an army of synths several times now to see things from a different perspective, never really getting too far in and eventually petering out when something more interesting comes along to demand I play it. Still, if anything, Fallout 4 brought with it some fun side stuff that I enjoy more than the main gig, such as Fallout Shelter and Fallout: The Board Game; I’ve already talked about the former, and this post is most definitely about the latter.

Initially, I balked at Fallout: The Board Game‘s price tag. Sixty dollars plus tax sure seemed like a lot for…a board game, but maybe I’m still new to this cardboard, tiles, meeples-run world, considering I’ve looked around online and seen other games priced much higher than that. Still, that price is in line with a brand-new videogame release, and I don’t often get a lot of those. Well, regardless of all that, in March or April of this year–sorry, my chemo-drippy brain is fuzzy on the details–I entered V.A.T.S., selected a copy for a 100% lethal shot, and watched as Bloody Mess played out at the register. Er, I bought a copy. Sorry, sometimes I lose myself in both the world and language of Fallout.

Okay, time for the nitty-gritty. No, not that Gritty. Fallout: The Board Game is a post-nuclear adventure board game for one to four players. Naturally, it’s based on the mega-popular series–well, maybe not Fallout 76 as it currently is–by Bethesda Softworks. There are multiple story scenarios to play through, and each is inspired by a familiar story from the franchise. Survivors begin the game on the edge of an unexplored landscape, uncertain of what awaits them. With just one objective to guide them from the very beginning, each player must explore the hidden map, fight off ferocious, irradiated enemies, and build up their survivor’s skills as they attempt to complete challenging quests and balance feuding factions within the game. To win, you must reach a specific amount of agenda influence points, and the number of influence points required for victory is dependent on how many players are participating.

Fallout: The Board Game is played in a series of rounds, with each player getting two actions on a turn. Different actions include moving, exploring new tiles, fighting enemies, questing and encountering, and resting. After all players finish their respective turn, the round ends with monsters activating and looking for wanderers to attack. Combat is handled with three custom dice. Every monster has vulnerable areas, represented by the V.A.T.S. icon, and players must roll to hit these specific areas. Having a weapon and matching S.P.E.C.I.A.L. stats will grant re-rolls, along with other cards and perks. Defeating monsters grants XP and sometimes loot, but the monster doesn’t go away entirely, instead it retreats into a dormant stage to fight again another day.

Experience is handled through a pretty nifty leveling system attached to a tracker. Each point of experience will move a peg along the player’s S.P.E.C.I.A.L. track, skipping over any empty spaces. Once it completes a circlet, the player gets to draw a new S.P.E.C.I.A.L. token to add to their stats. Duplicate tokens will instead grant a perk and single use abilities, and having certain S.P.E.C.I.A.L. tokens will affect combat encounters and mission quests. You also track your amount of radiation on this board, and if your HP every goes below the current radiation peg…your character perishes. The tracker also has slots for companions and inventory items.

There are quests. Lots of ’em. In fact, the base game comes with a 150-card deck of numbered missions to complete. When a player has an encounter, another player will read the card and options to them, but not the results. The player must then decide which option to choose without knowing the outcome. Alas, when playing solo, it can be difficult to not read the results as you do this to yourself, and I often based my decision on already knowing what goodies I got. Many quests will branch off into multiple cards after granting experience points or loot, and some will also reward you with influence points. Following an entire questline to its end is fun and just as satisfactory as in the videogames, but sometimes you have to juggle multiple quests, which can become overwhelming.

Phew. I know that is probably a lot to take in, and for me, it took several attempts at playing Fallout: The Board Game for most of that to sink in. I’m still not 100% certain how the shop works, but whatever. Also, the agenda points system isn’t great, especially in solo mode, but it’s how you win the game. Personally, I wish it wasn’t, as I have more fun doing quests and exploring unflipped tiles than trying to balance two factions or simply focusing on a single one only to betray it at the end if you suddenly see a way to get more agenda points with the other faction. It just doesn’t feel cohesive, but maybe it works better with more players fighting to gain these points first.

So far, I’ve only played solo, and it can be a lot to pay attention to. Each game has roughly taken me two to three hours to complete, and my first time having a go at it, most of that was dealing with the game’s initial setup. There’s a lot to set up, from the placement of tiles, to the shop, to your inventory, to the multiple quest decks, and so on. The game pieces look amazing, and I love the little enemy tokens. It’s pretty exciting to see things I barely glanced at in the videogames represented as useful cards here. I’ve occasionally also forgotten some rules and flubbed my way through a mission, and there was one mission card related to the alien mothership that simply broke my brain; I tried searching online for an explanation of what to do, but couldn’t find anything so I simply packed everything up and called it a day. The game is aesthetically cool, but not perfect in how it plays.

Oh, and I just became aware that there’s already an expansion available called New California. Right, and this gaming mat looks really neat and would certainly help me keep things more organized because I generally don’t know where to keep some of the decks and other items in relation to my health tracker and other cards…though its price tag is not immediately desirable considering it costs just as much as an entire game expansion. Hmm. Either way, I’ll keep having a go at Fallout: The Board Game in hopes that I can actually win it without getting a rule wrong or forgetting to do something vital. Y’know, like moving all the monsters towards me at the end of a round.