Reggie Fils-Aime has 99 problems, and the 3DS is one of ’em

Recently, NOA president Reggie Fils-Aime spoke with Kotaku at E3, claiming that the two main problems holding back the Nintendo 3DS from global greatness were a lack of Nintendo franchise games and a lack of a functional web browser. He purports that these problems are being snuffed out, what with their shiny new eShop and debut of several Nintendo-branded titles earlier this month. He does not believe the 3DS was launched prematurely. Clearly, he’s delusional. And wrong.

Not about the 3DS in terms of its two biggest problems. A lackluster launch lineup did not do wonders for the system. All it would’ve taken was a single new Mario game, and those things would’ve been gobbled up doubly. Alas, we got things like this and this, and were forced to wait for good games to first be announced. So far, not much has come out, and while many are loving The Legend of Zelda: Ocarina of Time 3D, it’s not exactly anything new to ogle. The lack of a web browser isn’t as huge of a cut as I suspect it is; if I have my 3DS on me, and I want to go on the Internet, chances are I’ll have an easier time on my phone or be able to find a laptop within minutes. Once I got the browser with the latest system update, I searched my way over to here to see what Grinding Down looked like on a tiny touchscreen. It’s okay, but the process was slow and clunky, and I probably will never use it again.

The online marketplace is welcoming, but not perfect. Why it–and the online browser–did not come ready to go with the 3DS back when it launched is mind-boggling. The fact that there was a button you could push for the browser which brought up a message like “The browser will be added at a later date” does an excellent job of fighting the fight against Reggie’s bizarre claim that the system did not launch prematurely, that this was exactly how they planned to do it all along. To, y’know, launch with weak games, no store, no online capabilities, strange friends list functionalities, and unclear plans for future growth. Sounds like quite a plan.

No surprise Reggie did not talk about the 3DS’ battery life. I guess in Nintendo’s eyes it’s not a problem, and the less it’s brought up, the less consumers will notice. That is until that red light starts blinking after a measly few hours of gaming. How is anyone supposed to watch a Netflix movie in 3D on this thing again? Curled up next to an electric socket, plugged in?

I have a 3DS. I do not love it, but I use it a little bit here and there, with its biggest gimmick always turned off in hopes of gaining an extra 15 minutes of battery life. The system has a lot of problems, and few fun titles to play on it, and the ones that seem like a good time are still many months away. It’s disheartening to see Nintendo’s lack of drive in making this system above and beyond the call of duty, but I guess that’s always been their stance in the industry: cool ideas and empty promises.

Top five E3 2011 announced games that I desperately do want 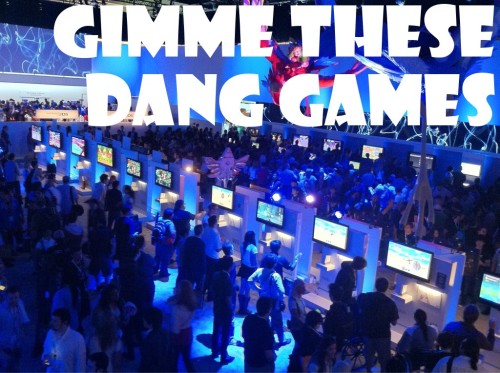 I’ve never really paid too much attention to E3 in the past, but this year I got the itch, and I actually watched some of the press conferences live over the Interwebz as they happened and, thanks to the killer kids at GiantBomb, listened to many podcasts and interviews, as well as devoured every bit of data put out there. And there was a lot to be put…out. Um, that sentence didn’t work as well as I’d have liked, but whatever. Let’s move on.

Videogames! They’re always coming out, and I always want ’em. And while E3 is usually about the big names, the same ol’ shooters and Kinect jazz hands and next iterations in the big name franchises, there’s also a lot of smaller titles there. Sure, they don’t get the same coverage and applause, but dang it, they should. A lot of them have potential, I promise. More so than the Wii U “experiences” at least.

Here’s the top five games that debuted or were announced at E3 2011 that I want to gobble gobble in the near future. Well, probably not the near future, as many of these titles are still a ways off, but a gamerboy can dream.

Insomniac Games is one of my favorite developers, and one of the big losses of choosing the Xbox 360 over the PlayStation 3 was losing access to the wonderful Ratchet & Clank series. So, when the rumormill started churning recently, and word was that Insomniac Games was going to announce a new multiplatform game, well…I got excited. Welcome, OverStrike! It’s not a shared Ratchet & Clank title, but it still focuses on crazy weapons, as well as class-based shooting. I’m usually not fans of these types of games, but knowing what kind of creative team is behind it is more enough for me. Okay, I’m in.

The Internet has been quick to remind us all that the original Luigi’s Mansion was not as good as we are remembering it to be, but phooey on them. I thoroughly enjoyed Luigi’s Mansion, thinking it to be a great change of pace, giving the other brother some love. Hearing him call out for Mario always got a chuckle in the room. Plus, I believe in ghosts, and they should all be vacuumed up for being very real things that really scare me. Think this will be perfect on the 3DS; a little ghost-busting on the go. Okay, I’m in.

An open-world GTA-esque game featuring…LEGO characters. Y’all know my deep love for the LEGO games, and y’all know my deep hatred for the majority of GTA-like games. Hopefully, this fusion will be a game-changer. Maybe because it won’t be so serious. The fact that it’s coming out for the 3DS is interesting; hopefully they can fit an entire seamless city on one of those wee carts. Okay, I’m cautiously in.

It looks simply gorgeous, retains the same fun and strong side-scrolling gameplay, and is going to allow for user-generated levels. Okay, I’m in.

Sonofabitch, now I need to buy a PlayStation 3. Okay, after I rob a bank, I’m in.

What newly announced games are y’all excited for? Phineas and Ferb: Across the 2nd Dimension? Shame on you, Grinding Down readers.