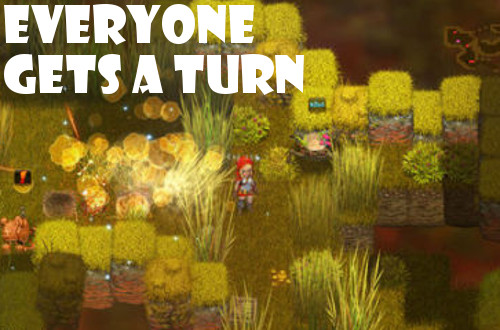 Y’all know I love a good, strange-as-heck videogame title, and Dragon Fin Soup is a wonderful example of such a beauty. One, it contains the word dragon, so I’m already intrigued, but it also sounds more like a fancy, medieval recipe than a tactical RPG mixed with roguelike elements and procedurally generated worlds. It tells you nothing about the game, but entices you to check it out nonetheless, which is exactly what I did…many years ago. According to my save file, I played 21 minutes and 51 seconds total. Well, let’s revisit the abnormal critter once more now in 2019 before I get to the uninstalling part.

Dragon Fin Soup stars Red Robin, a charming, yet raging alcoholic bounty hunter who would rather get into a bar fight than deliver baked goods. Players must take up Robin’s blades and set out across Asura, a lushly colorful fantasy world that sits on the back of an enormous space turtle–um, was Terry Pratchett okay with this?–on a journey to discover the secrets of her bloody past. That’s the setup, and it’s pretty interesting; at least our protagonist isn’t an amnesiac for no reason whatsoever. I’m just not sure how much like a twisted version of Red Riding Hood she is supposed to be…

Okay, now I remember what my initial problem with Dragon Fin Soup was. For some reason, the entire game doesn’t fit on my small, desk TV monitor, with important UI being cut off in the four corners or hard to read entirely. Alas, there is no option within the game to correct this, and I don’t have this problem with any other game on my PlayStation 3 or PlayStation 2…so I’m not sure how to correct it. Grrr. It makes figuring out what is going on a bit difficult, especially returning to the game after so many years away from it. Not impossible, but just more work than I want to put into this thing.

Dragon Fin Soup reminds me a bit of Dungeons of Dredmor, which…was a game I didn’t understand at all during my first few attempts at it. Nowadays, I’m much more familiar with the roguelike genre, but that doesn’t mean I love every game that takes permadeath super seriously or identifying items essential for breathing. For every Spelunky or The Binding of Isaac, there are countless other iterations that take inspiration from the punishing genre and run with it, for better or for worse. I think it is all about feel, and something feels off in Dragon Fin Soup; perhaps it is too much information at once or none at all. Speaking of that…

There’s no tutorial, though there is a dream sequence at the start that immediately throws you into combat. After that, you are left to your own devices, which for me, returning to this after years of being away, did nothing good for me. Dragon Fin Soup is a turn-based strategy game. Each move the player makes gives enemy units a chance to respond. Thankfully, it’s not as slow and laborious as it sounds. In fact, once you get a hang of the game’s rhythm and controls, combat can be fast-paced and frenetic. You’ll need to use a mix of magic, bombs, gunplay, and melee combat to take down your adversaries. I unfortunately didn’t get to see enough to keep me engaged and wanting to explore more or learn about Red Robin’s past.

Maybe in another life, Dragon Fin Soup. You still have a wonderfully odd title, and for that alone I give you all the kudos.

Dungeons of Dredmor hides its death behind doors 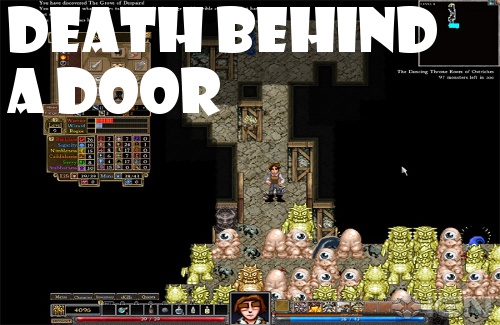 A new type of article is slowly going to be popping up over at The First Hour, and it’s called Indie Impression. I’m sleepy and still need way more coffee in me, so instead of describing it in my own words, I’ll just use Greg Noe’s:

Welcome to Indie Impression, a brand new type of article for 2012. As the name implies, these articles will be impressions on some of the numerous indie games that have been rapidly appearing recently. We here have built ourselves very large collections through cheap package deals via Steam, Humble Bundle, Indie Royale, and more. Some have amazing production values, some don’t. Some are incredibly fun, some aren’t. But without question, these indie games generally offer creativity vastly beyond anything you’ll find in mainstream gaming and will likely be the main driver behind industry innovation for a long time.

And as our indie backlogs have grown exponentially, we’ve decided to start sorting through our games and trying them out to get a good impression of each. To add credibility to our impressions, we will try to have at least two people play each game until they feel they have a solid, concrete opinion for writing. Impressions may be from ten minutes of gaming to ten hours, but in this case, we feel like it’s important enough to have multiple strong opinions on each game. With that out of the way, let’s continue to our very first candidate, Dungeons of Dredmor.

Basically, all those countless indie games we’ve been acquiring over the years are going to get some coverage, but not simply first hour reviews. Quicker coverage. A lump sum of impressions and thoughts. Fine by me, as I’ve struggled lately to sit down and take notes for an hour as I play new games. This was more off-the-cuff writing, which is to my liking.

However, I was saddened to discover that, upon the purchase of the indie bundle that contained Dungeons of Dredmor, I was unable to play it on my flailing Macbook. I recently blew my Christmas bonus (keep it clean, kids) on a new Windows-based laptop, and can now run a ton of games I once could not. It’s exhilarating and also kind of funny to watch me get excited over the fact that I now have a computer that can run Diablo II at a decent clip. Yeah. Which is good, because if I’m going to play a dungeon-crawler, I’m probably gonna play one that doesn’t kill me immediately after I go through a door.

Just read my impressions on Dungeons of Dredmor.

It’s been suggested that I give the tutorial a spin, which I might…but not in the near future. I can see why many like this type of masochistic RPGing, but it’s not clicking with me.