At least the cynical swipes in DLC Quest are totally free 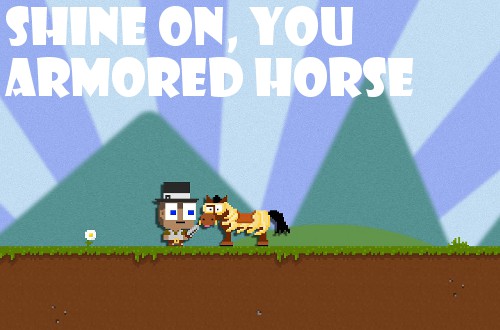 DLC Quest is a bit like a song or movie that directly references something from the same time period it was created in, and it could be anything, such as an actress or a movie or a made-up-word-that-is-now-totally-a-word like YOLO; the more time goes on and things change, the stranger it appears. It becomes a firm, unmovable companion to the mentioned item. DLC Quest is obviously about DLC, but it references a very specific time in DLC’s early, burgeoning years, and so it’s strange coming to it after things have, more or less, calmed down. At least it’s a decent little platformer, if a bit simplistic.

The plot in DLC Quest boils down to a single sentence: defeat the villain, save the day. However, that’s not very easy to do at the start of the game, when your hero is stripped of even his most basic abilities, like jumping or moving left/right. To gain more moves, you need to purchase in-game DLC from a shopkeeper dude by collecting gold coins. Heck, there’s not even a soundtrack until you unlock it. This is the main hook, as well as the game’s satirical punchline, which you’ll absorb on loop. Each DLC pack is priced differently and has a short, amusing description, and the DLC, once purchased, immediately affects the game around you. Like the pet pack or sexy outfits pack.

The call to collect all the coins and buy every DLC pack, whether it sounds useful or not, is still strong. I did hit a lull towards the middle stretch, but then bought the Double Jump pack and was able to find my second wind, now having new places to reach and explore. The movement and jumping is not fantastic, but it works well enough; thankfully, the platforming isn’t too challenging. Alas, there’s a lot of backtracking to the shopkeeper, which is not fun nor made funny when non-playable characters comment on it to the hero. If this was a lengthier title, it would be unacceptable, but since this is a pretty short, bite-sized experience, I let the less-than-stellar bouncing and returning to the same dude slide and enjoyed my time exploring around.

While DLC Quest‘s main mission is obviously to lambast the idea of downloadable content, it also pokes fun at Achievements with an in-game system of their own called Awardments. Most of them pop with natural progression, but a few are tied to tasks like discovering a specific hidden hole in the wall or killing every person/sheep you encounter. I went after some of these, but not all.

So, here’s the funny thing: there’s another version of the game called DLC Quest: Live Freemium or Die! I don’t have it, but I could totally upgrade by…purchasing DLC for DLC Quest. With actual money. The very concept they are making light of. It’s not a big deal, really, just something I find amusing. Sounds like it is more of the same, with a new villain to take down and more DLC packs to purchase to help the cause. I think the Day One Patch pack is the funniest from the list I quickly scanned, but I doubt I’ll ever come back to DLC Quest.

It’s not a game I’d recommend everyone dropping their life to play right now, but it’s an enjoyable, wholly unique experience nonetheless. I can only imagine how bizarre it might seem in like ten years. Or 2087, when DLC has taken over Earth and is our new robotic overlords and they grind us up into data code to make new DLC for government policies.