I’m in it to win it with Minit 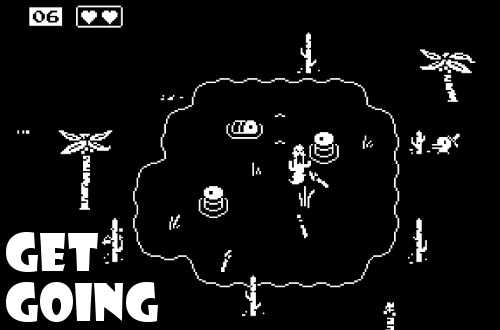 Minit was one of my top 10 games that I didn’t get to play in 2018. I have actually had a copy of the game installed in my Steam library since getting it via the Humble Day of the Devs 2018 Bundle, and yet, the irony here is that, for a game where each session of actually playing the game only lasts for sixty seconds, I never found the time to play it. Sure, I’m to blame there, but it’s not like I have anything super serious going on in my life currently. Well, the good news is that, according to this very post on Grinding Down, I have now finally played a bit of Minit. Not enough yet to win it, but I’m in it…still.

For those unaware, Minit is an action, puzzle-driven adventure thing developed by Jan Willem Nijman, co-founder and one-half of Vlambeer, Kitty Calis, who contributed to Horizon Zero Dawn, Jukio Kallio, a freelance composer, and Dominik Johann, the art director of Crows Crows Crows. It is based around time. Basically, the premise is that each of the player’s lives only lasts for one minute, resulting in tiny sessions of exploring the world over sixty seconds at a time. With each interval, the player will learn more about the environment and gain new items to help progress further and further. Inching forward slowly but surely is the name of the game.

It’s a pretty novel idea, executed extremely well. Other games that have done something similar to this, such as Half-Minute Hero, surely exist, but I haven’t played them. So, for me, Minit has been a truly exciting game to play. One, it’s a ton of fun to play, and the time limit never feels restrictive; in fact, as my little hero’s time winds down, I find myself getting excited to try exploring a different path on the next go. It is quite freeing. Two, I absolutely love Minit‘s look, which is clean and unobtrusive and does not end up distracting you too much when searching for something to do to make progress. Third, the usage of various home bases makes exploring new areas pain-free and getting around much easier.

Minit has you playing as a small bird-like pixel character–he kind of reminds me of a duck, but, y’know, a pixel duck with nothing more than a bill to go off of–who lives in a black and white world and is cursed with only ever living for a single minute. Despite all that, it’s an action adventure game just like The Legend of Zelda, with puzzles to solve too. The good news is that various actions do have permanence in the world, so dying doesn’t mean it was all for naught. For instance, finding key items to open up more progress stay in your inventory when you are reborn, and if you previously helped someone with a task, they remain helped. Thank goodness. This would be a much more cruel and nearly impossible game to play if you were forced to accomplish all this over again in your short-as-heck life.

According to How Long to Beat, Minit is a short game, roughly three or four hours long. I’ve already put about an hour and a half into it, so I guess I am halfway there. Although it has now been a week or so since I played it, and I fear I might have forgotten where I’m supposed to go next. I’m at the inn, looking to fill it up with patrons. Hmm. Wish me luck, and then, after about sixty seconds, wish me luck once more. 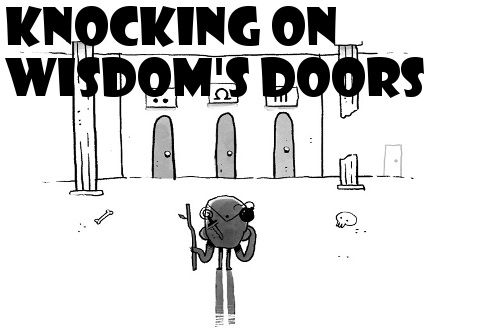 The Temple of No is the first Twine game I’ve ever played. How do I know that, other than being me and knowing everything I do except for the hours when I’m asleep and dreaming about drowning in an ocean of spicy tuna sushi rolls? Well, for starters, I had to look up the definition of Twine before beginning the game. Evidently, when it comes to videogames, it means this: Twine is an open-source tool for telling interactive, nonlinear stories. Basically, HTML-driven code that’s perfect for choose-your-own-adventure models, so long as it is inside a browser. I think you can pick your browser.

And that’s sort of what The Temple of No is, except it is more interested in breaking the fourth wall and ensuring you know that you are not the protagonist of the game than sticking to a structured narrative. The story is based on choice, and so you can either be a man, woman, or frog in search of a “map that sees all things that ever have been or will be (but in map form).” Yeah, y’know. Like the Marauder’s Map, but turned up to eleven. This amusing little jaunt is written by The Stanley Parable’s William Pugh and features gorgeous illustration work by Dominik Johann. Crows Crows Crows, the studio behind the equally free and interesting Dr. Langeskov, The Tiger, and The Terribly Cursed Emerald: A Whirlwind Heist, are also behind The Temple of No.

Despite its understandably short length, I only went through The Temple of No once. Sure, sure, I’m probably missing out on a ton of jokes and maybe even more bits of delicious, storybook-esque artwork, but when a game is driven by choice–in this case, what words I click on and in what order–I can’t help but see these decisions as firm and final. I followed the man of the story as he worked his way through the jungle and into the temple in search of the map. In my mind, I can’t simply undo that history to see what would have gone differently with the frog character despite being a huge fan of Chrono Trigger‘s Frog design. Psst: if you played through as the woman or frog, tell me a bit about their stories in the comments below. Okay, thanks, bye.

The writing is good and amusingly smart in places, though I did spot a few grammatical errors. Nothing major, just a missing period or word that was lowercased that probably should be capped. Since the game is heavy on text, it is important that the writing be strong, captivating. I found the clicking of words and timing of audio cues to be enjoyable, and there’s one bit where a man begins talking to himself…for a very long time. I eventually cut him off, but I do wonder just how long it goes on for. Regardless, that’s some solid dedication for a joke, but that’s what makes The Temple of No special. There’s great care behind it.

I guess I’ll have to keep my eyes open for future Twine games, as well as whatever comes next from Crows Crows Crows. I really do dig their aesthetic and versatility.

Go, brave as a bear
To find that special wisdom
That only TWINE knows

Follow or disregard instructions in Dr. Langeskov, The Tiger, and The Terribly Cursed Emerald: A Whirlwind Heist

Here’s the honest truth: if I had just taken some more initiative last month and played Dr. Langeskov, The Tiger, and The Terribly Cursed Emerald: A Whirlwind Heist when it was released like a good little soldier boy, it most assuredly would have made my top five favorite games for the year. Sorry, Time Clickers, but let’s get real; you would have gotten cut fast, seeing as you don’t hold a candle–in terms of a singular, satisfying experience–to Dr. Langeskov. Still, the in-game feedback forms are right, as this title is far too long for consumption, but one should never complain about a free lunch.

Before I describe Dr. Langeskov to you in my own fancy words, allow me to share its amusing description on Steam:

A 15 minute heist game by Crows Crows Crows & Directed by William Pugh (The Stanley Parable). Slip into the soft-soled shoes of the mastermind responsible for the greatest heist- oh god I can’t do this any more, i’m joining the strike. good luck writing the steam description.

Right. Once you load up this “heist game,” you’ll begin to realize this is not a traditional, straightforward experience on your end. Instead of controlling the player moving through the mansion, avoiding pitfalls and dangers like a pro, and stealing the cursed emerald for reasons unknown, you are the one behind the curtains making everything happen. I mean everything–lighting, weather effects, making the lift rise. Without you, the tiger would never get released. You are the man from Omaha that flew into a strange land via a hot air balloon and is getting things done. Honestly, it’s the sort of off-the-wall interactions you’d expect from The Stanley Parable‘s William Pugh, with the action being focused around a gleefully playful narrative and whether or not you want to listen to the narrator’s instructions or do things as you please.

So, just like in The Stanley Parable, you are guided from one location to the next with the help of a cheeky, about-to-lose-it narrator that speaks directly to you and often openly to himself in a nervous, captivating manner, voiced by British comedian Simon Amstell. When he notices you, he immediately puts you to work behind the scenes, seeing as there has been a worker strike. His tone is never ornery, and even when you decide to not do what he says and push buttons clearly designed not to be pushed right now, he handles everything with a nervous laugh before ushering you onward. He is not an all-knowing being, commenting on your choices from a cloud of snobbery. Look, I’m not going to be doing a top ten of my favorite British narrators in videogames, but if I did, he’d be pretty high up there, rubbing shoulders with Thomas Was Alone‘s Danny Wallace and The Stanley Parable‘s Kevan Brighting.

Since Dr. Langeskov is fairly short and somewhat non-linear in that there are a handful of different things you can do as you go along, I won’t spoil too much about each room, especially the final area, which had me grinning from ear to ear as chaos and comedy collided into one fantastic conclusion. But my suggestion is this: take your time. There’s a lot to look at in terms of posters on the wall, post-it notes, papers strewn about, and all of it feeds into the bigger picture. I’m not gonna lie–some of the “fake” game posters look intriguing. Much of these elements are highly detailed in the same fashion as things were in Gone Home, an aspect I greatly appreciate, not just because my eyesight is poor.

I played through Dr. Langeskov twice and did not find the grappling hook. Curses and shouts. Shaking fists and fiery eyes. I’ll go back one more time, most likely, to see if it indeed does exist, as well as to gobble up each and every strangely placed pretzel. More games should contain pretzels as collectibles. If Dr. Langeskov does anything for our industry going forward, please let it be that.

Welcome to backstage
Of a heist game, press and pull
Levers, free tiger