The Bulletstorm demo is for dick tits and dick tits only 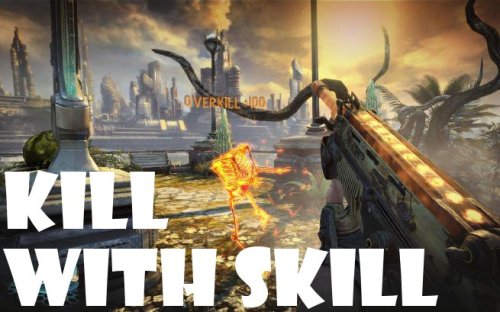 I’ve talked about my prowess before when it comes to run-and-gun first-person shooters; in short, I’m usually no good. Can’t target quick enough, can’t figure out how to snipe and stay on the move; can’t really work with a team. I like to play much slower than that, planning everything all out, meticulous inch after inch. Still, I had heard some interesting things about Bulletstorm, a new FPS from the makers of the Gears of War series, which I’ve never touched, and a demo recently hit Xbox Live for GOLD members. Gave it a download, and then I gave it a play. Here’s an account of pretty much how it went.

You’re given access to only one Echo. Not sure what an Echo is, but there’s more than one of ’em. Anyways, before you can kill with skill, you’re treated to a cutscene of sorts that plays as a tutorial and introduction to Bulletstorm. It’s self-aware, voiced by space pirate Grayson Hunt, who I can only describe as a generic meathead, and totally full of itself. Tara’s response the minute it was over? “Laaaaaaame.” You heard it here first, dear readers. Lame-a-rama. Actually, it’s also offensive and crass, as well as perfect for serial killers in training.

Your character is partnered with two computer-controlled players, and you basically explore different sections of a collapsed building, shooting brainless enemies and racking up points. Points are the point. The whole “kill with skill” is a strong concept except you’re not really rewarded for being clever. Rather, so long as you have a high cruel streak, you’ll begin earning points for kicking an enemy and then blowing his head off or throwing them into a spiky ceiling or even sending a train right through an entire line of ’em. These are called skillshots, and each has its own point value. Evidently, you can also shoot right up their asshole, but I was unable to achieve this. The guns are very ho-hum, but Grayson does have a neat electric leash that can toss enemies your way, prime for the kicking or shooting. That leash kind of made the demo worth it. Kind of.

There are 45 skillshots available in the demo, and over 130 in the final build of the game. Some that I earned include Voodoo Doll, Boned, and Flyswatter. Fun names for devasting actions.

And that’s the demo. Ten minutes or so of shooting, moving forward, shooting some more. I think I got like around 3,000 points or so. Yup, total n00b fail! But I really worry for the game because I can see the demo being the entire game with a hapdash of a “story” tossed in for no one’s sake. I can only imagine that Bulletstorm goes like so: cutscene, shoot up a section of dudes, cutscene, shoot up a section of dudes, cutscene, and so on. The variety is in how you kill enemies, but that’s probably all you will do. Kill enemies with weapons. For hours on end. Maybe to some that’s enjoyable, but repetitive gameplay, by nature, gets stale fast.

Bulletstorm is irrefutably juvenile, and the demo is all I probably needed to experience…ever. And for fun’s sake, here’s some phrases used affectionately during the demo to hit home their target audience: pasty, bean bag, butt hole, and, the new cult favorite, dick tits.