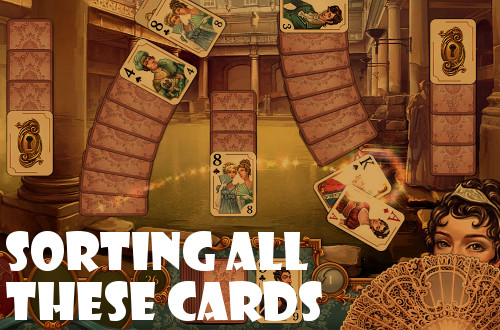 I first fell into a Solitaire hole back in college, when I was working at Rowan University’s art gallery, which basically boiled down to me making sure nobody stole any pieces of art. Occasionally I had to throw down spackling paste to cover up some holes in the wall when an exhibition was over and we were prepping for the next one, but I mostly sat at the desk next to the front door, did homework or studied, and played time-killing games to kill time. Namely Snood, the board game Life with a co-worker, and…well, Solitaire.

No surprise here, but I have no memory of when Regency Solitaire from Grey Alien Games appeared in my Steam library, but that’s okay. I’m sure it came from a bundle. Anyways, after somewhat playing through Dark Heritage: Guardians of Hope together, I was on the search for something similar that my girlfriend and I could play together and thought this would be a good fit because it is both traditional enough for her tastes–a card game–and have modern videogame mechanics for me–buying upgrades, stacking combos. Plus, there’s a story. Yup, Solitaire with a story. That’s something you don’t come across every day.

Here’s that story, as best as I can sum it up–help Bella take charge of her own destiny, create the ballroom of her dreams, and fall in love with the better chap who is not named Mr. Bleakley. You’ll tour historic London, Brighton, and Bath in hopes of *ahem* playing your cards right and earning money to purchase vital upgrades, like fancy window curtains or a new fan to wear with that stunning blue dress. Also, you need to reclaim your family’s fortune or something. I don’t know. You play Solitaire with some twists, watch a static cutscene full of posh dialogue that isn’t too far off of a Downton Abbey episode, and repeat the process several more times. It’s not the most captivating tale ever spun, but I appreciate it being there nonetheless.

The Solitaire part of Regency Solitaire isn’t exactly one-to-one with the standard version everyone’s either played in real life on their bedroom floor or on computer, just killing time. Also, it’s not three card, spider, yukon, or any other crazy spin-off style. Instead, you have a small deck of cards and one card revealed to you. You can then either match it with the card above or below based on what is shown in the level, and the levels vary in terms of card placement and other issues, like some being hidden beneath a lock that will only go away if you find a key card first. If you can continue the string, say matching a six to a seven to an eight and back to a seven, go for it, because combos mean multipliers, which affects both how you do in the level and how much gold you earn at the end. To help with this endeavor, the game provides multiple power-ups, such as cupid’s bow, which can eliminate a single card on the playing field, and “wild” cards to help fill the gaps in combos without breaking your streak.

Each chapter is a total of ten hands long, and there are always specific goals to try to hit by the end, such as uncovering a hidden item, hitting a large combo chain, or getting three stars in a number of hands. Thankfully, if you aren’t happy with how a hand went, you can hit retry at the end and give it a go, something Melanie did often in her journey for perfect rounds. Oh, right–did I mention that she loved playing this? I think she might even go back through it later on the harder difficulty. Fine by me, because it’s on my profile, so I’ll get to enjoy all those hard-earned Achievements.

Look, Regency Solitaire is not going to blow your mind, but it’s a fun, often relaxing, often tense experience wrapped around some high-class dialogue from a stereotypical cast of opulent characters. It’s easy to just get lost in the Solitaire aspect, trying to keep those combos going and immediately jumping into the next ten hands to do even better or see what new twists are thrown your way. A glance at Grey Alien Games’ other titles show that they are mostly match-three puzzle games, so if you want something unique, by all means, start here. Just be prepared to lose several hours trying to find a six or four to clear out that final five in your hand.

Gloom is a macabre morsel of merriment 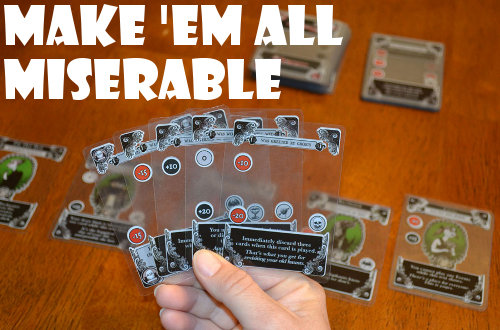 Gloom asks you to laugh in the face of others’ displeasure, perfect for an evening of beer, pretzels, and friends, so long as everyone is in the mood to make much mayhem. Also, alliteration. It’s not a great fit for more serious gamers, thirsty for strategy, but I’ve found the game of inauspicious incidents and grave consequences a strong palette cleanser after energy-draining, often soul-crushingly long sessions of Lords of Waterdeep or Kingmaker.

In Keith Baker’s Gloom card game, which came out in 2005, you assume control over the fate of an eccentric family of misfits and misanthropes. There are four families in the base set, each containing five members: Blackwater Watch, Dark’s Den of Deformity, Hemlock Hall, and Castle Slogar. The goal is easy enough: make your family suffer the greatest tragedies possible, and then kill them off one by one. Modifiers like “Was galled by gangrene” and “Was swindled by salesmen” add negative points to your people by lowering their self-worth, and the player with the lowest total family value after an entire line has been wiped out wins.

Gloom‘s gameplay is rather simplistic, but still requires some planning. Each turn, you get two actions to play modifiers on your family or an opponent’s, event cards, and untimely death cards. Please note you can only kill someone on your first action every turn, preventing you from loading Lord Wellington-Smythe up with a lot of self-worth and then forcing him to kick the bucket. The event cards can really shake things up, but other than them, it’s perfunctory card action, with a few rule changes to pay attention to, all of which are stated directly on the cards themselves.

The real magic behind Gloom is in the stories it births. When you take control of a family, you play the narrator of their lives, coming up with reasons why they went here or there and did this or that. It’s better to play a modifier with passion and reason than simply to give a character negative 15 self-worth. Sure, it takes imagination and effort, but it is worth the storytelling, especially when you begin to link your families with others, like the time I decided that Butterfield, the butler for Hemlock Hall, was actually married to Grogar, Professor Slogar’s work-in-progress teddy bear, after receiving the “Was wondrously well wed” modifier card from another player. Keep the stories alive, and the game, even when it slows down due to card shortages or roadblocks, remains bursting with flavor.

It’s hard to know what I love most about Gloom: the art or design of the cards. Both work hand in hand. All of the cards are transparent, which makes it so easy to see how the modifiers stack on top of a family member. Plus, they’ll survive an accidental soda spilling before all them Munchkin cards. The macabre and gloomy artwork, done by Scott Reeves, Lee Moyer, and Todd Remick, as well as heavy use of alliteration, will make many think of Edward Gorey instantly, but there’s also room for some influence from The Addams Family comics and Lemony Snicket’s A Series of Unfortunate Events. Regardless, fans of ominous Victorian horror will delight at the family member depictions, though the majority of the other cards lack personality.

I brought Gloom home-home during the holidays to play with my sisters, but we never got the chance due to all the to-and-for hubbub, charades, and Scrabble bouts. Hopefully we can make up for this over the summer so long as no one is stalked by snakes or sleepy from the sun.

Posted in artwork, board games 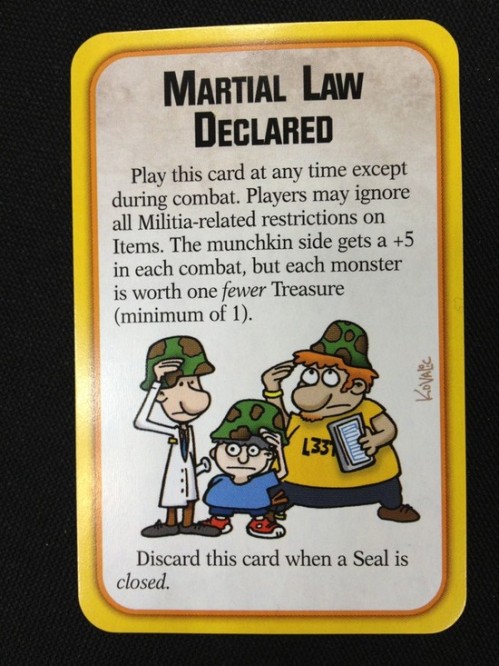