It’s lights out for the Destiny 2 open beta 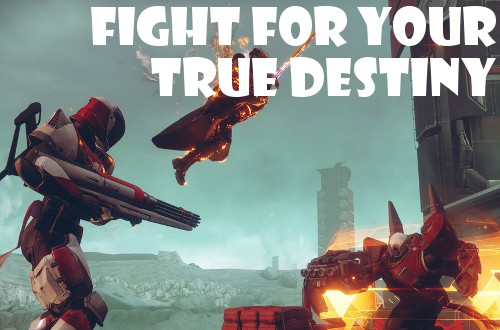 I never got into the original Destiny, but I sure watched a good amount of coverage on that game via those chuckleheads over at Giant Bomb, enough so that I felt like I understood the ups and downs of Bungie’s latest sci-fi first-person shooter that wanted to be a big ol’ massive multiplayer extravaganza, but was severely lacking in the story department. Still, people went ga-ga for this thing and constantly cried out “The shooting feels great!” to any naysayers while I contently hacked away at Borderlands 2 and the online multiplayer aspect for Gears of War 4. That all said, I may be interested in checking out Destiny 2, especially now that I got to nibble a bit off the larger loaf via the recent free and open beta.

What was in the Destiny 2 Beta, you ask, probably already knowing the answer, but helping me segue into a new paragraph nonetheless? Well, it features activities from three core experiences to use the company’s own words: Campaign, Cooperative, and Competitive play. I’ll talk a bit about each below and my experience with shooting alien monsters that were shooting at me and accidentally hitting the “dance” button one too many times. Mmm-hmm. Evidently, you could visit a specifically hub section called the Farm, but only at a special time, that which I did not know. That’s fine. I prefer not to be social.

The campaign mission is called “Homecoming,” and it’s a mix of single-player action with some wave-based enemy elimination near its end where other real-life players can join in to help out. You are responding to an emergency distress call from the last safe city on Earth. Also, I forgot to mention, you get to pick an already decked-out character at the start of the Destiny 2 Beta, and I went with the Hunter class. I also tried out its two subclasses, namely Arcstrider and Gunslinger, preferring the latter greatly, but only after I figured out how to activate my super ability; I’m sure original Destiny players had no trouble with that, but the game never instructed me on how to pull this off, so I had to look it up in the control options menu. Anyways, it’s a short, linear, and perfunctory mission, where nothing goes wrong, with some story stuff at the end involving the word “light,” sometimes capitalized as “Light,” that went completely over my teeny tiny head.

Next up is the Cooperative Strike called “The Inverted Spire,” which tasks you with infiltrating an enemy stronghold alongside two other Guardians to take down all active threats. Also, here’s a bit of descriptive text that is lost on me–The Cabal awoke something deep beneath Nessus’ surface. Right. So, I went into this with two other players, one of who spent a long time jumping around the milk waterfall and trying to reach out-of-reach platforms. Eventually, you get to a big boss fight at the end, which is where everything went to crap, especially because communication was non-existent. I died, they died, we all died, and I eventually dropped out (sorry, peeps with gamertags I can’t remember). I can imagine this being easier and more fun, as well as rewarding, with a dedicated group of friends that are able to issue commands to one another. Plus, there wasn’t any loot to pick up, which is an important element for a loot shooter.

Lastly, there’s Competitive Multiplayer, and several versions of it to try out. I don’t think I could tell you what mode I played, but it was one team versus another, and we were trying to control certain points, indicated by capital letters, on the map and keep the opposing team from getting them. I wasn’t great at this, but I did manage to shoot a few guys and hold a flag for some seconds. It’s very quick and somewhat chaotic, and despite my constantly changing affection for Gears of War 4 online multiplayer, this was most certainly not for me. I felt like I barely had a chance to do anything, and when I finally did and something went wrong, it went bad fast. I’m sure there’s a whole cut of the population that loves this, but if I’m to play any Destiny 2 down the space road, it’ll likely be campaign stuff and Strikes, but only when I’m with a trusted group of Guardians. If such a group can exist.

So we’ll see come September if I’m interested in picking Destiny 2 up. I can concur with those that shouted about the shooting feeling good. It does. It really, truly does. I also like its overall look and the names of the weapons and pieces of armor and the tougher enemies, but I also want a good story, sue me. I don’t want to have to piece things together via websites and an app on my phone. I want characters, and I want those characters to interact with me in a meaningful way to get me to care about Earth blowing up or things going dark or whatever the plot turns out to be. Perhaps I’ll wait a bit and see what people have to say about it. Maybe while I do that I’ll play through all of Halo: Reach. Er, maybe.

You might say I play the Halo games wrong or, at the very least, in the wrong order. Other than dabbling around with the first level in the original Halo a few times on the PC many moons ago, here’s how my Halo history has gone down so far: I played Halo 3: ODST, which I found a bit lackluster, and now three years later I just beat Halo 3. Y’know, the game that came before the previously mentioned one. Truthfully, I don’t think it matters because these games seem to have generic, paper-thin plots that are there to set up firefights or crowded hallways of enemies, as well as a vehicle-driven sequence or two, which all boils down to shooting aliens. I suspect I said the same thing minus the alien bit about Battlefield 3, but I’m really picky about my first-person shooters, usually going for ones that focus on non-shooting mechanics and stealth.

Anyways, recently, I jokingly tried to sum up the plot of Halo 3 on Twitter, which went something like this: You are Giant Soldier, out to shoot bad aliens. Then foreign plant aliens show up, and you shoot them too. At one point, these plant aliens are your allies, and they help you shoot the bad aliens. Then they get mad at you, so you are back to shooting all of them. Lastly, a planet blows up. The end. Sure, that might sound a bit dismissive, but really, that’s kind of it, unless you want to also discuss the post-credits scene, which is there to remind the Bungie loyalists that, don’t worry, you’ll get to do all of this again in the next forthcoming title. It probably also didn’t help that I played the first two missions back in October 2013 and didn’t get the urge to play again until after finishing Crackdown and wanting to keep the 2007 hype train a-rolling.

If there’s one thing I really didn’t like about Halo 3, it’s that Master Chief can’t run. Or, if he can, I have no idea what button sets those bulky feet into motion. The game, in general, moves extremely slow, but when you are trying to rush over to a Wraith to pop a sticky grenade in its engine and crawling babies are passing you–something is terribly wrong. Yeah, Master Chief can jump really high and regain his health/shield, but I’d trade all that and a limited edition Needler that shoots green spikes to be able to run up a hill. I guess speed is not a concern for Halo fans, but games like Borderlands 2 have spoiled me too much.

Also, let’s talk a bit about friendly AI and the wonky, unpredictable physics of flipping vehicles. Master Chief, on occasion, is accompanied to firefights with a handful of soldiers, and most of them will die before the end, either by the enemy’s hands or your own. In my case, I ended up running over a lot of them with a Warthog. They are terrible at flanking the enemy, and sometimes end up in weird, buggy states, like standing still or running up against a wall. I found myself on at least three different levels sitting idle in a Warthog while an AI-controlled soldier got in the driver seat, sat staring ahead, and mumbled, “Need a ride, sir?” until I got out, removed him from the driver’s seat, and drove away on my own. Enemy AI is pretty decent, as the goons and grunts will take cover and try to surprise you now and then. For true hilarity, when your vehicle tops over, you can press a button to flip it upright, and sometimes that works, and sometimes the entire thing does an Olympic gymnastic routine that would surely garner high scores.

After finishing the game and immediately deciding not to replay it all once more on Heroic or Legendary difficulty, I went hunting for skulls. These are tiny collectibles you can find in the levels that, once grabbed and turned on, make the game harder, but also give greater rewards. Sort of like the god shrines in Bastion. Alas, these skulls are teeny tiny and aptly hidden, making hunting hard. In other words, I looked up a guide and followed along, grabbing all of them within an hour, with only two proving quite tricky (Fog Skull and Famine Skull). First-person platforming is no easy thing.

I also tried a match or two of online multiplayer–yes, people are still playing Halo 3 competitively–and that’s fine fun, but again, it all moves so slow. You die, you respawn on the opposite end of the map, and by the time you get over to where everyone is shooting at each other, they’re all already dead.

Which is your favorite Halo game? Should I try any others or just call the series average at best and move on with my time? I could live life just fine if I never had to shoot another stream of Flood monsters ever again…