Watching a videogame’s credits is an Achievement like none other 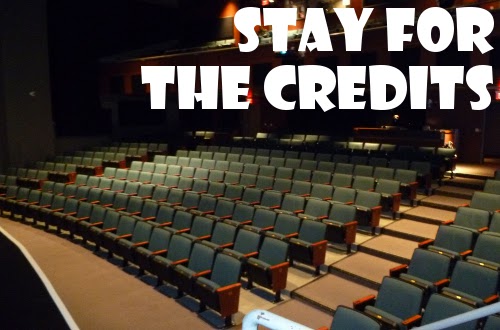 Many, many nights ago, I loaded up Blocks That Matter. It’s a puzzle-based platformer starring a little mechanical fella known as the Tetrobot, which can collect materials from the world and then build shapes out of them. You then use these shapes–as well as a few other abilities acquired along the way–to solve puzzles, bypass enemies, and reach the end of the level, which is always a purple portal. The main goal is to rescue your creators, these two Swedish goofballs that got kidnapped, but that’s kind of moot in the grand scheme of things. It’s quiet, cute, easy to grasp, with the potential for some serious brain-twisters, and full of love for the games that inspired itself.

However, one of the Steam Achievements for Blocks That Matter is for watching the credits, a increasingly more common concept that I just can’t quite grok. You select CREDITS from the main menu, kick back for maybe a minute, possibly a minute and a half, and then you’re done, achieving a thingy. It pops up in the corner, like you did something magical. This one, in fact:

Videogames are not movies: Watch the credits until the end

Right. Nothing tricky about this at all, and yet it got me thinking about credits, and the whens and whys I would watch them. Certainly, if I didn’t see this Achievement while perusing the list on Steam, I wouldn’t have watched the credits on my own. At least, not until I beat the game, that is–if such a happening ever happens. It might not, considering they are totally accessible from the main menu. But I like watching credits. It is part of the “completing a game” process for me, where I remain sitting, absorbing the final moments of a game before it goes to black and then back to the main menu. Some credits are better than others, which leads me to believe that designers need to dangle a carrot on a string to get people to watch.

A couple other videogames in my collection have Achievements for watching the end credits or simply sitting through them to see something special at the end at least. Deus Ex: Human Revolution gave out an Achievement if you sat through their seriously boring, long, and numbing credits sequence for a little Easter egg that connected that game with the the original Deus Ex. Hint: think Robert Page, Project Morpheus, Chimera nano-virus, and the D Project. I think the original Assassin’s Creed did something like this too, a teaser for the next game in a way. Can’t think of more at the moment, but I’m sure they are out there. Feel free to school me in the comments below.

On the flip side, just the other night, I beat Borderlands 2. The final fight was beyond lame, as I was able to glitch the Warrior into submission by firing corrosive-based bullets at it through a lava-made waterfall after it killed me initially. Just don’t go back down into the area after respawning. Simple as that. Meh. That topic is for another day. The end credits were a lot of fun. No surprise, given the writing and general aloofness present throughout Pandora and from Gearbox itself. I liked that it went alphabetically, naming who did what voices, surprised to see so many actors/actresses taking on multiple parts. Did you know that Randy Pitchford himself voiced Crazy Earl? Well, now you do. Further down, everyone–and I do mean everyone–got to write a sentence or two, thanking whoever, whatever. A lot of these boiled down to gratitude for family and loved ones, but at least it was something different to read than copyright jargon. Also, while all this is all happening, some great concept art is fading in and out. It made me feel a whole lot better, and I didn’t even need to up my Gamerscore because of it.

Other memorable end credits include The Legend of Zelda: A Link to the Past and Suikoden/Suikoden II, which are the kind of motif endings that like to show you just how everyone in the world is getting on after the final evil was vanquished. The ones for ‘Splosion Man reminded me of that one time in college when I was at a college frat party and I drank some…um, nevermind. Portal because of that song.

Hmm…I thought I had a point in all of this, but I think I lost the thread somewhere. Basically, if your end credits are engaging and creative, you don’t need to toss in some digital trophy to make me watch them. Treat them with the same care and thought as your game’s plot or character designs. Just don’t give me a tiny list of never-ending names backdropped with uninteresting music. Give me something to read, something personal to take away. I’m watching these credits to see who was behind the thing I just put hours of my life into, whether that’s a good or bad spin; regardless, recognition is deserved. I am watching, but give me something to watch. 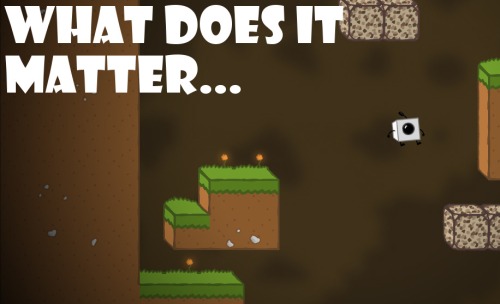 I didn’t expect to purchase the latest and greatest from Humble Indie Bundle–which, when announced on Halloween, was simply Voxatron Alpha–but then they went and threw in two more games, specifically Blocks That Matter and The Binding of Isaac, both of which I’ve seen in action thanks to GiantBomb‘s Quick Looks and found appealing. To get all three games, you have to pay above the average price, which at the time of purchase, was $4.75. My lunch at Panera Bread earlier this week was double that (turkey artichoke panini and broccoli and cheese soup for the curious). Included in the purchase are two soundtracks, as well as the promise of further updates for Voxatron Alpha, a game not fully complete yet, hence the alpha-ism.

It’s all good either way because I’m pleased to announce that all three games run–and run amazingly–on my Mac. My Macbook’s torrid history of trouble playing newer games has been steadily documented here on Grinding Down. Knowing that, I continue to try, and as each game loaded up, I held my breath with worry. Would it load at all or just quit to the desktop? How unbearable would the lag be? So many questions, none that would ultimately be answered. Every game loaded without a hitch, and plays very smoothly. This warmed my gaming heart and fingers immediately.

Of the three, the one I played the most of after installations were done was Blocks That Matter, a cute puzzle-platformer that has some elements of Minecraft to it. You control a tiny drillbot and are trying to rescue your creators by navigating through each level to a magical portal at the end. The trick is in figuring out how to use the blocks you collect to build new platforms. The other two titles, Voxatron Alpha and The Binding of Isaac, are interesting, if very chaotic. A lot of runnin’ and gunnin’ if you know what that means. Maybe I just need to get used to the controls more. Both require fast response skills, and sometimes that’s harder to do–at least for me–with a mouse and keyboard than a gamepad. We’ll see if I can get any better at ’em both.

If past bundles are any indication, there’s the strong possibility of Jeffrey Rosen adding more games to this bundle before it closes for good. Since I’ve already bought in, hopefully that means I’ll get further perks for free, such as soundtracks, additional gamey games, and pivotal updates, which is always nice. If anything, these bundles are just a great way to show support for indie game development, something I’m growing increasingly aware and curious of, and whether or not I love every game I buy, I still like to be involved.