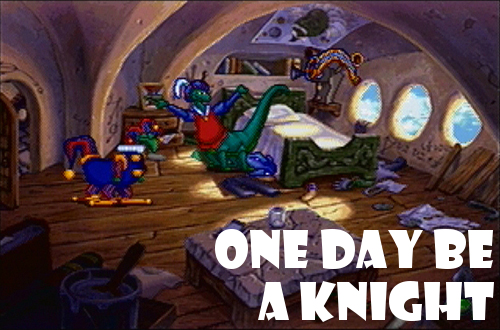 Videogame consoles have never been thought of as the go-to venue for adventure games. Gameplay in point-and-click adventure games often ask you to review a single stationary scene, point at many things with a cursor, and click on them to see what happens. Nine-point-nine times out of ten, you’re doing this with a mouse–thus, the clicking.

Unfortunately, console controllers are not designed for this type of molasses-tempo action, leading to developers fusing the point-and-click style with other more commonly accepted gaming elements, like exploration, puzzle solving, action scenes, QTEs, and so on. Some of the more recent and more successful console adventure games include L.A. Noire, Telltale’s The Walking Dead, Stacking, and Machinarium. It can work, but it has to be designed with a consoler gamer in mind.

However, back in 1996 or 1997, I played an adventure game on a console in my high school years’ bedroom that clearly would’ve worked better with a mouse and keyboard. Alas, it only came out for the PlayStation 1 and Sega Saturn. Yup, talking about everyone’s favorite medieval-themed, distinctly British Blazing Dragons.

Blazing Dragons is based on the animated television series of the same name that originally ran on Teletoon in Canada. Never heard of it? Join the club. Join it now, and join it some decades ago when I bought the game simply because it looked cartoonish and fun. Plus, y’know, talking dragons. Evidently, the Blazing Dragons episodes that did make it on U.S. screens were heavily bowdlerized. Anyways, the show, which came from Monty Python brainchild Terry Jones, was a parody of King Arthur and other moments during the Middle Ages, mixing it up enough by telling the stories from the perspective of anthropomorphic dragons beset by evil humans.

The game version of Blazing Dragons, which was developed by The Illusions Gaming Company and published by Crystal Dynamics, walks the same line. In a twist on the legend of King Arthur, you play as Flicker, a young dragon living in Camelhot. Oh, and he’s madly in love with Princess Flame; alas, he’s not eligible to ask for her hand in marriage because he is not a knight. However, a dragon tournament has been announced King All-Fire, where the winner will not only win the prize of the princess, but also become the new king.

With that in mind, you play the game. Using a controller. This means cycling through different cursor options (foot, eye, hand, face) with R1. Flicker can collect a number of various objects and interact with the eccentric cast of both other dragons and human characters to solve puzzles. Thankfully, this isn’t one of those adventure games where you can easily die or find yourself permanently stuck for bypassing a single item earlier on. Yeah, I’m looking directly at you, Beneath a Steel Sky. Many of the puzzles end up relying on your knowledge of fairy-tales, such as planting a bean in fertile soil or using Rapunzel’s hair as a rope to reach something previously unreachable. The other side of solving involves Flicker’s inventions, which end up being crafted with less-than-desirable materials instead of what they really need. Evidently, there is one moment of pure action, but I don’t recall exactly what you had to do and when it happened; I suspect probably near the culmination of the dragon tournament. Otherwise, it’s a lot of chatting for clues, gathering junk, and using items to get one claw closer to becoming a true knight.

I liked Blazing Dragons for its colorful characters, goofy, uncaring plot, and devotion to punny names, such as Sir Loungealot, Sir Blaze, Sir Juicealot, Librarian Pureflame, and Rapunsel Yablanowitz. I was too young to really care or be impressed by the game’s much-touted voice acting cast, which starred the likes of Cheech Marin, Jim Cummings, and Terry Jones himself, though I do remember the audio not being that great to actually listen to. It’s not that many of the characters said lewd things, but rather they sounded poorly mixed, tinny. The game was not perfect, with long load times, some pixel hunting, and the occasionally forced action sequence, but it stood out at the time as something original, a strike of endearing imagination. If anything, I believe this game lead to me discovering Discworld II: Mortality Bytes and reigniting my love for Terry Pratchett’s series of same-name fantasy books.

Everybody loves Raymus, not Reemus

In The Ballads of Reemus: When the Bed Bites, one simple bug job leads to many bugs and bigger problems, and Reemus and his companion Liam, a purple bear that plays the lute, are all to blame. Naturally, it’s now up to them to save the town and do mundane tasks for people to get key items that will help them move forward with their exterminating business, as well as put them in the limelight, the perfect spot for the stars of a ballad or two. Unfortunately, everybody in Fredricus loves Raymus, Reemus’s more successful brother, and so the unlikely duo have a lot to prove.

When the Bed Bites has a certain familiarity to it, and I think I’m just digging deep into my point-and-click gaming history and recalling the fond time I had solving puzzles in Blazing Dragons, though the humor found there was ten times more British. Still, both games are extremely colorful and filled with zany, wacky characters and fun, Xanth-like ideas, such as the noserpillar, ice cream cactus, and the condiments forest, which shows that the people behind it aren’t afraid to open up their imagination for all to see. It definitely made getting to a new scene all that more exciting because, truly, anything could show up.

The game is divided into a number of scenes–maybe eight to twelve in total, and if I was a better game journalist I’d work harder to confirm the actual number, but meh, it’s almost time to take a holiday break–and each is its own contained mini-adventure, which I appreciate greatly. You’ll find all the items and puzzles that need those items for solving in one scene only, so you don’t find yourself still holding an unusable flyswatter by the end of the game. These tiny story arcs play a continuous part of the whole story–which is Reemus and Liam trying to right their wrongs and get people to listen to their ballads–but make for convenient gaming, as I played When the Bed Bites in three separate sittings, never feeling exhausted or lost.

Puzzles range from unbelievably easy to fairly difficult, though sometimes the fault was mine, and I just didn’t try clicking on every combination possible. In certain scenes, you can switch between Reemus and Liam to have each handle their own slice of puzzles before reuniting. Occasionally, I found it difficult to call out the interactive objects from the backgrounds, and I ended up stuck in the condiments forest for a good while until I realized that to get the metallic bark for cooking that sweet, savory bacon, you have to click near the bottom of it, as clicking towards the top only gets you an item description. Also, due to the developers doing a bang-up job of really hiding their hidden item: was unable to make the seagull’s headstone or finish the moth’s poster, both missing two pieces before I moved on. Thankfully, you can pause the game at any time and bring up a walkthrough from the options menu that doesn’t spoil story stuff, but guides you in the right direction for puzzle solutions to keep things moving. I will admit to using the walkthrough several times, though I kind of wish it didn’t open to a separate browser window and was contained within the game itself somewhere. Immersion must be kept.

Audio-wise, I found the game’s soundtrack to be pretty pleasing, save for one song near the end that was repetitive and slow to build, and even after it went somewhere, it was still the same notes over and over and over. It’s the kind of light, fantasy tunes you’d expect to hear at your local Renaissance fair. Liam and another bard early on sings some silly songs, and they are short and enjoyable. However, the voice acting throughout didn’t sit well with me on a constant rate. I found the leading man Reemus sounding a bit too Steve Blum, which did not match the art, and there are some Irish-sounding lovebirds that seem really out of place. And a lot of the female voices are overdramatic and absurd, almost as if men are trying to do a woman’s voice. Surprisingly, Liam the purple bear’s voice was perfectly acceptable and easy to listen to. Sound effects are minimal overall, though the squish sound for finding the hidden bug collectibles is pretty satisfying, even in a gross way.

For those that don’t like reading, you can watch me play some When the Bed Bites in this “Paul Plays…” vid, but be aware that you can’t really hear me too well when I foolishly attempt to talk over some of the game’s dialogue, which is very loud. Balance, balance, balance–it’s tough to get. Again, I’m still learning. But please take a look/listen nonetheless: