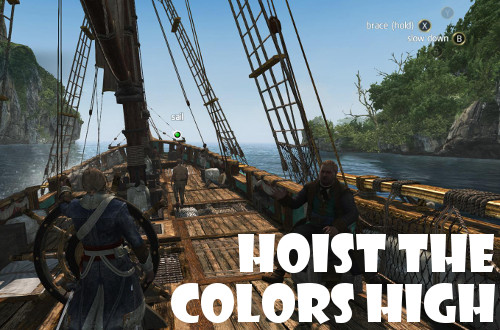 Assassin’s Creed IV: Black Flag was given out to Xbox 360 players for free as part of the Games with Gold program back in…oh my, late April 2015. For some reason, I thought it had been sitting in my digital library for longer than that. At some point, it was also given out to peeps on the Xbox One, but I didn’t have the console yet and wasn’t smart enough then to know that I could still click download and tie it to my account for future use, which means I’m stuck playing the previous generation version. It is serviceable, though I’m sure facial expressions are a bit more lifelike on the newer consoles.

A reminder for any new readers here at Grinding Down on my history with the Assassin’s Creed series, which I enjoy from a somewhat casual perspective. Once I’m into one, I’m into it, unable to not climb to every rooftop and take care of each icon on the map until all that is left is a clutter-less picture. I got into the series like many did at the start, finding the first Assassin’s Creed impressive, but repetitive. Then, for some reason, I next played Assassin’s Creed: Brotherhood and absolutely loved it, both the single player campaign and the multiplayer, which is an aspect of gaming I generally steer clear of. Last year, I went back and played Assassin’s Creed II, which helped to make more sense of story details in Brotherhood though that’s on me for playing them out of order. And now here we are, skipping Assassin’s Creed: Revelations and Assassin’s Creed III to do some hardcore pirating. Fine by me.

Black Flag‘s main story is set in the 18th century Caribbean during the golden age of piracy, people being smarmy, and lots of ships sailing to and fro. The plot follows notorious pirate Edward Kenway, the grandfather and father of Assassin’s Creed III protagonists Ratonhnhaké:ton and Haytham Kenway, respectively, who stumbles into the conflict between assassins and Templars after he is shipwrecked. In the present day scenario, you are a new employee working at the Montreal offices of Abstergo Entertainment—a subsidiary of Abstergo Industries—exploring its cubicles, eavesdropping on conversations, and hacking computers to uncover secrets about the sinister company. To be honest, I don’t care a lick about the storyline so far, in both realms; thankfully, the gameplay provides plenty to draw enjoyment from, and never demands you get on with the ruddy campaign.

In terms of gameplay, there’s all the usual elements from previous Assassin’s Creed games here: climbing, stealth assassinating, syncing, looting, running, hiring groups of people to hide among, trailing guards, and so on. The new stuff is mostly ocean-bound, with Kenway able to sail a ship, plunder and loot other ships, and explore numerous islands on the map that may house treasure and other goodies, like rare animals to murder for your fancy pouches and outfits. By far, my favorite advancement in this series is that everything is now available on your map after syncing a high view point, and then you can spend the next hour or so collecting each and every thing before moving on to do the actual story mission. Or collecting more from another synced view point. There’s little hand-holding, with the game treating you as an actual, capable adult–these decisions are yours to make. Plus, to catch shanties for your pirate crew to sing while sailing the ocean blue, you have to chase them down in the environment, which is way more fun than simply chasing a dude down in a race or for a few coins.

Still, it’s another Assassin’s Creed game from Ubisoft, and some stuff never changes. Like having your character leap from a building’s rooftop and lose half his health when really you meant for him to move a little to the left and travel along that rope tied to another rooftop. Also, and I want to do some more research into this, but the subtitles follow a strange style related to capitalization, where most words in a sentence are uppercase, but not all of them. Like so: “Avast, Kenway! Do you have Time to Make your crew a Large Plate of Scrambled eggs? We are Totes Hungry.” I don’t know, it’s very strange and hard to not notice since I enjoy reading words. Missions where you trail dudes and have to maintain a specific distance with them, but not be spotted return, though at least you can rate them one star at the end through Abstergo’s feedback forms. I still think combat is fairly button mashy and annoying, which is why I try to go for the stealth kills if I can.

The stats screen at the start says I’ve completed 15% of Black Flag so far, and in terms of story, I’m somewhere in sequence 3. That’s fine. I’m in no rush, especially when there are so many glyphs, treasure chests, and shanties to grab, as well as assassination targets and pirates to rescue and kitty cats to pet. Did I not yet mention you can press a button to pet a cat as it moves between your legs? And that it purrs affectionately? The best Assassin’s Creed game yet.