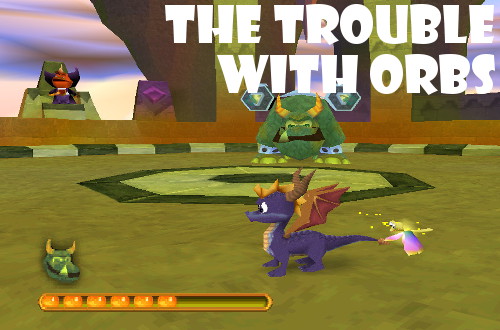 Earlier this year, I put the original Spyro the Dragon to bed. This was a game that I had started playing in 2014 and really liked, but moved away from over the years, only returning to it in 2016 with the drive to see its credits roll. Shortly after, I started playing Spyro 2: Ripto’s Rage! and vowed to not take the same length of time to beat it. And look, I remained true to my words, even if I maybe never said them out loud here, but whatever. That’s two purple dragon romps down for the count, with a third still waiting in the wings. Soon, Spyro: Year of the Dragon. Very soon.

Let’s see. After saving the world and many elderly dragons from Gnasty Gnorc in his last adventure, Spyro and his friend Sparx decide to take a vacation to the lovely, picturesque Dragon Shores. Unfortunately, while there, they are sucked into a magical vortex that takes them to a realm called Avalar. All three of Avalar’s worlds are in danger of falling under the power of a Napoleon-like dictator named Ripto. In order to save these worlds from destruction and tyranny, Spyro must travel to and fro, helping out who he can while also collecting a number of things: gems, talismans, and orbs. I emphasized the last one on purpose, with more to say later in this post.

For good and for bad, not a lot has changed since Spyro’s last outing. Which, in terms of narrative, wasn’t that long ago. When it comes to development, there was only about a year between the release of the first game and the second. Anyways, you’re still charging enemies, breathing fire, jumping, gliding, and collecting butterflies to power up Sparx and stay alive. A couple new moves have been added to the little dragon’s arsenal, such as being able to swim underwater, using ladders to climb higher up, and an overhead smash stomp that I think I only used once or twice for a story reason and never again. There are hub worlds, which contain gems and orbs to find, and then within these hubs are warp gates to individual levels that will hand out talismans as a reward for finishing its main through-line. Story progression is gated by a specific number of these things, so it is in your best interest to get as many as you can…as soon as you can.

Alas, I really hit a wall between the third world of Winter Tundra and the final boss fight against Ripto. I needed 40 orbs to move on and was only somewhere around 25 at the time. This meant I had to go back, multiple times, to levels I had already completed and find the extra challenges to do to earn an orb. Generally, these challenges are towards the end of each level, which means a lot of replaying, something I already do excessively in them numerous LEGO videogames. I found that some of the orb challenges rated five stars were easy peasy and others rated two or three stars to be impossible. Some of that has to do with controlling the camera or Spyro, as moving him with both speed and skill is not easily doable; I preferred the slower challenges, like herding cows into a fenced off area, instead of chasing after thieves or playing a lackluster minigame of hockey.

I hope I’m not seeing a pattern when it comes to these final boss fights. The one against Gnasty Gnorc was long, frustrating, and had the nasty sting of having you redo the entire thing if you messed up once. Yeah, yeah…gaming in this generation is spoiled by lots of checkpoints and saves and magical power-ups to get us through the tough parts, but it really felt like the main chunk of the game sat at a difficulty level of 3 and then the last fight was cranked up to 11…just because. Well, it’s all that again with the final stand against Ripto, which is broken into three sections. Two are on the ground, easy enough if you keep dodging and picking up sheep for health, and the last has Spyro flying above a pit of lava, dodging incoming homing missiles while also trying to dish out his own damage. It definitely took me more than five tries to put Ripto in his place.

Spoiler alert: there are no plans to collect the remainder of orbs (15 left) to open up whatever is hidden behind that sealed door at Dragon Shores. There will never be a plan. If anything, I hope to start Spyro: Year of the Dragon soon, though that may be a more likely candidate for 2017 under the assumption that there are even more things to collect in that one. Mmm. I’ll also freely admit that I’m now much more curious about how things went for Spyro on the PlayStation 2 when Insomniac Games handed the reigns over to another developer and moved on to the Ratchet & Clank series.

Lastly, I’ll leave you with my favorite code for Spyro 2: Ripto’s Rage!, which is my favorite hidden code from every game ever, no matter what the genre – Big Head Mode! Pause the game, and then enter Up, Up, Up, Up, R1, R1, R1, R1, Circle. You are very welcome. 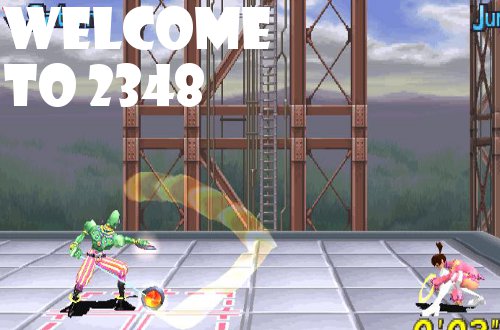 It’s the year 1997, and I’m playing a fighting game set in the far-flung year of 2348 with wide eyes, unable to take in everything it is showing me. The outrageous characters, the stages with the power for ring-out victories, the zany powers, the futuristic and unique weapons, the way that one alien could grow to three times his size, filling up the majority of the screen like some Super Metroid boss. As a teenager with a ripening imagination, it was some pretty cool stuff. Star Gladiator had the honor of being one of a handful of strange fighting games I owned on the PlayStation at that time, rubbing elbows with Bloody Roar 2, Robo Pit, and X-Men: Mutant Academy.

I read somewhere once that Star Gladiator was originally supposed to be a Star Wars fighting game, and you can see the roadmap clearly in Hayato Kanzaki, the rebellious young bounty hunter who wields a Plasma Sword in battle. Or perhaps you can better see the lines blurring with Gamof Gohgry, a brown-furred alien that looks a bit like a certain non-English-speaking Wookie. If you squint, you might be able to find a few other striking similarities between the two franchises. Though Star Wars: Masters of Teräs Käsi did eventually get made.

The plot is surprisingly convoluted and as follows, which I will openly admit to looking up. In 2348, humans have established contact with various alien civilizations, and life is good. Everyone has healthcare, the government hasn’t shut down, old age kills people, not guns, and so on. Humankind is able emigrate from one planet to another. Unfortunately, there are still some problems with several alien races, forcing the Earth Federation to create Plasma weapons to help protect the Earth from possible outside threats. Nobel Prize-winning physicist Dr. Edward Bilstein uncovers the secret to humanity’s “sixth sense,” a technique for capturing the energy of the human mind, harnessing it as an energy source called Plasma Power. Eventually, the Earth Federation learns that Bilstein experimented on innocent people, immediately arresting and exiling him from Earth, imprisoning the physicist on a satellite orbiting Planet Zeta. Four years after this, an Earth Federation army base was attacked by a small group of rebels calling themselves the “Fourth Empire”; surprise, surprise–Bilstein, who had built himself a powerful cyborg body and escaped from his satellite prison, is their leader. Panicking, the Earth Federation puts out a call for anyone able to utilize Plasma Power and put an end to Bilstein. This project is codenamed…y’know it, Star Gladiator.

Anyways, it’s a fighting game. You select a character, start on the left side of the screen, and you fight. Every character has two attack buttons for their weapon, a kick, and guard defense. You can do combos and special attacks. Battles take place on a limited 3D plane, with ring-out as possibility for victory, something that I’ve loved every since first playing Virtua Fighter in an arcade. The character’s weapons make each fight unique, and I remember enjoying Saturn’s yo-yos, Franco’s rapier, and June’s rings the most. Interestingly enough, depending on how fast you fly through the arcade mode to the final fight with Bilstein, Star Gladiator either ends with a false ending or it continues on with a special battle against an unplayable computer-controlled Ghost Bilstein. Losing to Ghost Bilstein results in both a bad ending and a game over, but defeating him will open up the character’s true ending.

Everyone remembers the cheat code for extra lives in Contra on the NES, but I also took the time to memorize another: Big Heads in Star Gladiator. After you select your character, immediately press and hold Right, Start, Circle, and Square until the match starts. Simple as that, and hilarious every time. Couple this mode with the character Gore that could grow in size, and well…my PlayStation was pushed to its limit, surely. You could also unlock Small Heads, which were not as effective in the humor department.

It’s a weird fighting game, but one I miss genuinely for its weirdness. Capcom dabbles in weirdness elsewhere, for sure, and not even in just fighting games, but Star Gladiator never took itself seriously and felt like a Saturday morning cartoon brought to digital life. Evidently, a sequel called Plasma Sword: Nightmare of Bilstein came out, but I never saw it. According to the Internet, it sounded like merely a minor update to the first game, with additional characters being more or less “mirrors” of the original cast. However, if you can, go with Episode 1, something you’ll never see me write about Star Wars.