I’d rather watch Shin Megami Tensei: Persona 4 than play it 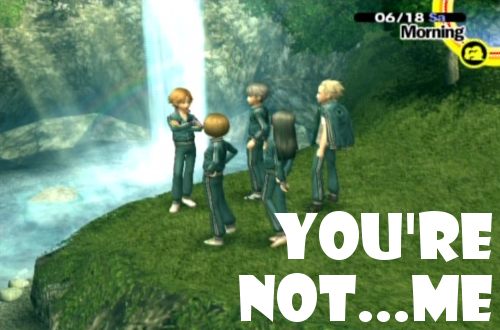 If it’s not terribly obvious, I’m a big fan of the Giant Bomb website. It’s a place that prefers to present things within the videogames industry raw and honestly, as well as welcomes everyone to contribute to its ever-growing wiki. For myself, I’ve done some decent wiki work on Game of Thrones: The Game, The Sword of Hope II, and Musashi: Samurai Legend. I go there every day to read and watch and interact sporadically on the forums.

But I’ve only recently taken it upon myself to experience one of the biggest things the website is known for–their lengthy tackle of playing Shin Megami Tensei: Persona 4, the critically acclaimed event where the term Endurance Run got dubbed. It’s 155 episodes of varying length, with Vinny playing and Jeff constantly adding colorful commentary, and I’m just under halfway through it on episode 71. Strangely, I’m hooked, and it has a lot to do with the ridiculousness of the game itself, as well as the GB duo’s reactions to these moments. Otherwise, it looks like the kind of JRPG I used to play, but no longer have the time and dedication to handle now.

Persona 4 is an odd story, and I can only imagine it gets more odd later on. Nay, I predict it. The main character and his friends from school form an investigation team to unearth the answers to recent murders in Inaba, Japan. There’s a strange connection between these murders and a TV-world they can enter to fight shadow demons. During the time you are not fighting monsters, you can work on increasing relationships with your friends and family by doing social activities, such as getting jobs, attempting beef bowl challenges, and going to camp. Also, since you’re in school, you have to study occasionally for midterms and finals. And, when certain stars align, you can pursue romantic relationships. Oh man, that’s a lot of systems to juggle.

The First Hour‘s Greg Noe absolutely hated Persona 3, and I have to suspect he’d not like Persona 4 much more, considering that they share the whole “grind in a dungeon and then spend a lot of time socializing with friends and foes” thing; one big difference between the two is that, during battle, you can control everyone’s actions. But yeah, grinding and socializing–that doesn’t sound delicious to me either. But from a watching perspective, hey…it’s quite engrossing despite its slow gameplay. A lot of menu manipulation and a constant pausing when a list of decisions pop up; the greatest part is that it’s not me making these choices or dealing with items and switching Personas in battle and so on. That’s up to Vinny and Jeff, and they can make some silly mistakes, which might normally be frustrating on my own playthrough, but are now hilarious to witness. No, really…keep casting Bufu on enemies that heal from ice spells.

A bonus from watching this Endurance Run inspired me to pick up my bereaved copy of Shin Megami Tensei: Devil Surviver Overclocked again for the 3DS–with triumphant success, too. Though these both come from the same franchise, they are not entirely alike. The Social Linking stuff is gone or mostly diluted in Overclocked, as I have had to make a few relationshippy decisions, but otherwise you just watch a few different plot-driving scenes before going into a battle. Fights are more RTS-based than RPG-based, with character placement and the available number of moves vital to how a battle begins and ends. Individual battles are turn-based, with an importance placed on using the correct elemental spell to earn extra turns; I’m still learning the ins and outs of this, but I’m getting there, I swear. Just finishing up Day 3 after a whomping from the immortal demon Beldr…

So, while I’m not playing Overclocked, I’m watching Persona 4. It’s a nice way to stay within the game’s solar system, even if they aren’t exactly similar. All right. About seventy-plus more episodes to go until I see how Persona 4 ends. I’m contemplating adding it to my 2012 Games Completed list once I’m finished watching because…well, by that point, I will have invested a whole bunch of hours, and that should count for something.