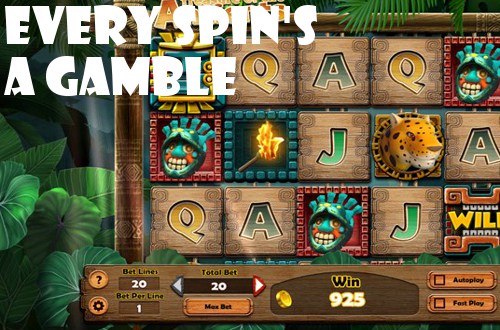 Despite growing up right outside Atlantic City, I’ve never really had a deep desire to gamble away my hard-earned savings. If you can call tip-outs from being a bus boy during my high school and college days “savings,” that is. Unless it’s through a penny slot machine, where a dollar can go a long way. The siren’s call of ka-ching, ching, ching never sounded beautiful, and this was reinforced that time I went out to Las Vegas for Spring Break and saw old women in wheelchairs, an oxygen tank under one arm and a plastic bucket to gather money in the other, spending all their hours in front of the slots. It’s the sort of scene you can’t help but stare at–because it’s real.

Speaking of “real,” Microsoft is a real strange company. Remember when they were only mainly concerned over operating systems? Er, nevermind. Now they got videogames and consoles to juggle. When it comes to “casual” gaming, they have really cornered the market, at least on their personal devices, championing their own takes on Bingo, Solitaire, Sudoku, Minesweeper, Jigsaw, and Mahjong, all of which are free to download and consume. I’ve dabbled in just about all of these, and, truthfully, they’re pretty great, unoffensive, and inexpensive ways to spend a few minutes on your phone or computer while transitioning from one thing to another.

Microsoft Jackpot is no different. It’s the corporate company’s stab at slot machines, which are one-armed bandits with three or more reels that spin when a button is pushed or lever is pulled. These gambling machines reward the player when certain patterns of symbols appear after the spinning stops. They are still the most popular means of gambling, accounting for 70% of U.S. casinos’ income. All machines differ in terms of themes and bonus mini-game mechanics, but the majority of them work the same way, keeping players sitting on a stool, feeding their coin slots. I remember enjoying one once that involved frogs leaping around on lily pads, though I quickly walked away from it after winning a bit of money.

To play the slots here, you use money–shiny, gold coins–earned in-game as you go instead via your debit account. You are also earning points with each spin to raise your main level, which gates what themes you can try out. So far, at level 9, I’ve only unlocked three of the five themes, which are the Jungle, a James Bond riff, and Candy Boxes, and they all have different bonus mini-games where you can hit it big to, naturally, in the future, bet larger amounts. Personally, I think “Jackpots Are Forever” is the most interesting theme, with your 007 wannabe Jack Pott chasing after jewel thieves before they can escape via boat or helicopter. Granted, all of this is done by spinning the reels and relying on luck, but it is much more fun to watch than simply a flashing sign and music cue. Plus, there’s plenty of puns to eat up.

Since Microsoft Jackpot is a free-to-play game, there are of course ads to deal with. Some pop up right after you hit all the triggers to start a bonus mini-game, meaning you have to grumble and sit through it to get to the true action, and others can be watched once every half hour to earn some extra coins or lucky clovers, which supposedly provide you better chances at winning though it has never felt like it. You can also spend real money on fake money, and the “best deal,” for Microsoft at least, asks you to purchase 2,000,000 gold coins, 13,000 lucky clovers, and remove all ads for a meager $199.99. Your call in the end, but I’m going to lean towards “don’t do it.”

Perhaps my favorite or maybe the most dangerous element of Microsoft Jackpot is that you can set it to autopilot. Basically, you can select how much you want to bet, check off “auto spin” and “fast spin,” and watch as the machine continuously eats up your money, occasionally giving you some back. Similar to Time Clickers, I’ve been leaving it on in the background as I do other work, checking in with it to ensure I’m not bankrupt or if I am ready to do a bonus mini-game. In real life, this sort of feature could be crippling, possibly life-destroying. Here, it helps skirt the tedium.

I’ll definitely keep spinning the reels in Microsoft Jackpot until I can unlock the last two themes, as I’m curious to see what they do differently, but probably after that I’ll take my digital money and time elsewhere. Perhaps all of this gambling will inspire me to finally attempt that Fallout: New Vegas run where I bankrupt every casino on the strip.