See what horrors The Doll Shop holds at your own risk 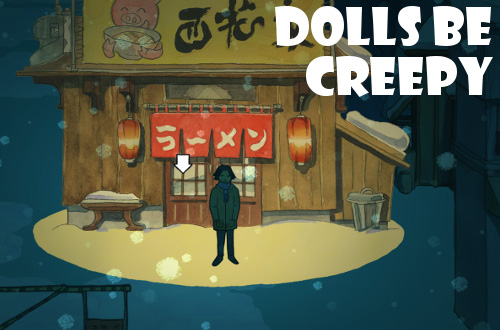 Naturally, I was drawn to The Doll Shop for its beautiful watercolor artwork and depiction of life in the Japanese countryside, not its focus on dolls. I’m not into dolls in general, but I’m really not into dolls that look like little children or come alive and are violent. Maybe I watched Child’s Play when I was too young or maybe I still can’t get that episode of The Twilight Zone out of my head where a ventriloquist’s doll is both alive and neglected, replaced by one called Goofy Goggles, and exacts revenge on his master by flipping their roles; that said, I’m perfectly fine with nesting dolls. Either way, they aren’t for me, but that doesn’t mean they aren’t for others. Such as the main protagonist in The Doll Shop, a young man in his twenty-somethings that repairs dolls for a living, though I don’t think we ever learn his name…

The Doll Shop comes from Atelier Sentô, which is a French duo, specifically Cécile Brun and Olivier Pichard. Their work is often based on their travels throughout Japan. This one is set in a small, desolate village during the winter. The village is still reeling from a girl disappearing weeks ago, but life goes on, especially for our leading lad, who is repairing broken dolls while also collecting butterflies in his shop’s back room. However, he is harboring a great and terrible secret, and when a childhood friend returns to the village and reconnects with him, he finds himself unable to not contain what he has done.

The game is a mix of horror, romance, and light puzzle solving. It’s both a point-and-click adventure and visual novel, and the game offers you several choices to make throughout your days in this cold, dark village. These will affect your ending, of which there are three to see, and you can also collect posters as you explore around. The only tedious part of The Doll Shop is when you have to constantly dip your paintbrush in the paint after each action you take to fix the doll, but that’s a minor complaint at best. Everything else is sublime and beautifully done, though I do wish there was more things to click on and get descriptions of, especially when it comes to things like bath-houses and shrines, which, as an American who has never really left the country, except to go to Canada, I do not have a lot of experience with.

The graphics for The Doll Shop were hand-painted with watercolors by twenty-three students over three days in January 2018 during a workshop at the ECV art school in Bordeaux, France. Each student selected a part of the background, such as a tree, house, or mountain, and drew a sketch of it on paper. Next, they used a light pad and an 8B pencil to copy it on to watercolor paper. After that, the drawings were painted with watercolors. Finally, all the drawings were scanned, cut out on Photoshop, and incorporated into the game, which was made in Unity with the Adventure Creator add-on. The results are simply stunning, both in motion and as simple stills; I personally loved the look of all the buildings as I explored the village while the snowfall changed from light to heavy and back to light, all backed by a wonderfully quiet yet atmospheric soundtrack.

Anyways, just like with every Metal Gear Solid game, you get a progress screen at the end to tell you how you did and what is left to uncover. If I was to make up a title based on my work, I’d say I earned Gossamer-winged Butterfly. Right. Moving on, my results after the first playthrough of The Doll Shop are as follows: 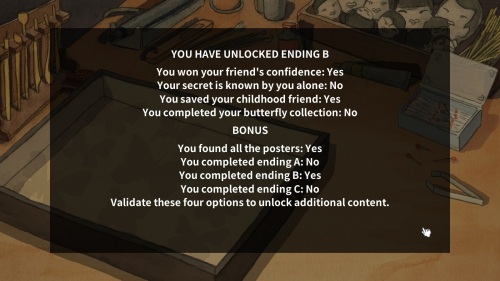 I don’t plan to replay The Doll Shop. My story is my story, and those choices I made are locked in place. Ending B is all she wrote. I tried to play the main protagonist as a broken man breaking down, desperate for help, but sometimes unable to speak the words. He did terrible things and is terribly troubled, and soon everyone will know. I hope he gets help, and I mourn for those in mourning, now burdened with extra trauma. Yet another doll story to forever stay in my mind and haunt me for years to come. Thanks, Atelier Sentô. 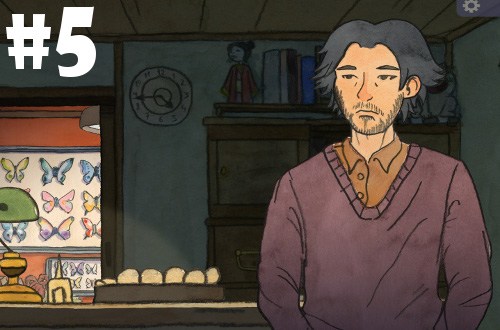 And we’re back with these little haikus  of mine. Go on, gobble ’em up. However, if you want to read more of my in-depth thoughts about these games that I’m beating, just search for them by name on Grinding Down. As always, enjoy my videogamey take on Japanese poetry, even if they aren’t instant classics, such as the works of Matsuo Basho, Yosa Buson, or Kobayashi Issa. Hey, not everyone gets to be that great.