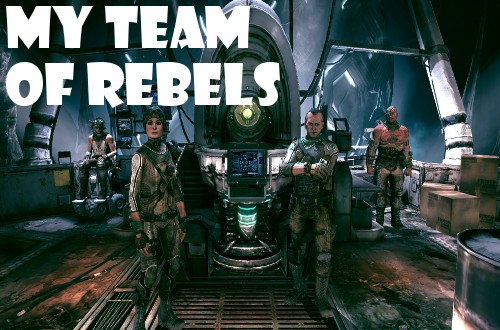 Admittedly, I never payed too much attention to the story in Rage. Once I saw that Rage was not another take on Fallout 3 or even Borderlands, and that it was much more about shooting mutants and racing, I just kind of zoned out, played the game in short bursts, focusing simply on completing missions, which meant going to X, shooting enemies until enemies stopped running at me with guns locked and loaded, finding the sweet spot, and then doubling back to whatever town was nearby to turn in the quest. Once I got to the sewers, which meant the second disc on the Xbox 360, I gave up trying to find all the recipes, cards, race trophies, and jump ramps. The only direction was forward, with blinders on.

And so, just last weekend, I sat down to play Rage some more, intending to finish up another mission or two. Y’know, inch my way on. I was still in Subway Town, sleuthing by the locals and speaking in whispers with my team of rebels hiding even further down below the sewers. They had a plan to attack Capital Prime and unearth all the other buried Arks in the wasteland. Or maybe the world. I remember seeing a global map at some point. But first, I had to take out the defenses on the Authority Bridge, which was simply done. After that, it’s off to Capital Prime to start the revolution. Here’s how rebel team leader John Marshall tells me before I head out:

This is it, what we’ve been planning for so many years. Now, we hit the Authority where it hurts.

Take this Code-Cipher. You’ll be able to access any Personnel Entrance near Capital Prime’s main gate. Be careful, it will be heavily guarded. Once inside get to the Ark Control Center, and Upload the data from your ID Drive. That will trigger the emergence of the remaining Arks.

Upon re-reading the mission text, yeah, it sure sounds like this could be the final mission, but it also seems like the “kick to the groin” mission, the swift attack before the actual smackdown, and then we get one last push at defeating the mysterious and shadow-wreathed Authority. Surely we’ll navigate a complex city structure and then have to take down some big baddie akin to that boss battle earlier in Rage, where scope got served and a monster the size of a building crumbled and bled through the walls and dramatically changed navigation. I mean, someone has to be telling these Authority goons what to do–it has been strange to not have a clear antagonist all this time. General Joe M. Authority is my guess.

Nope. Instead, we get narrow corridors. Filled with Mutants and Enforcers, which are easy to deal with since you receive basically the BFG before the mission starts, which obliterates anything alive. And then more corridors. More Mutants and Enforcers. You begin to suspect copy/pasting is at work. I mean, you hear the name Capital Prime, and one immediately imagines a futuristic and bustling city-state, a place where people live and work and get things done. Not just a bunch of hallways that all look the same. Ugh. Eventually you get to ride a three-tiered elevator ride, with each stop bringing out a wave of mutants to shoot and a button to press. Touch that third button, and the game is over. Cue badly rendered cutscene and confusion. That’s it. Back to the main menu screen select. It’s over fast and unexpected and strangely without any kind of final boss. I honestly emitted the following words after pushing that third button, and please note that I was completely alone at the time: “Wait, what?”

So, a disappointing close to a pretty mediocre first-person shooter with decent mini-games. I’m curious to see if there will be a Rage 2, as the non-ending implies more things are happening, what with every Ark across the globe turning on and resurfacing, but I’m not holding out much hope.