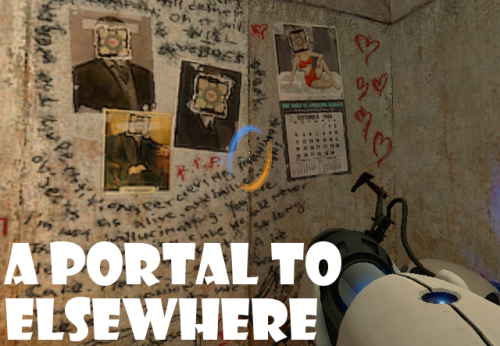 Always late to the party, I finally emerged from my rocky home this summer and played Portal–this time, all the way to completion. I guess I can now join society and nod appreciatively at jokes about cake and cubes. See, I did give Portal a try back in May 2010, as it was released free for those on Macs via Steam. Unfortunately, my relic of a machine was unable to run the game well, even after tinkering with a lot of settings, so I never went back. However, over the summer, needing a little something-something to play, I picked up The Orange Box, a collection of Valve games, namely: Half-Life 2, Half-Life 2: Episode One, Half-Life 2: Episode Two, Team Fortress 2, and Portal.

And this time, it was playable. I did not spend 45 minutes trying to get Aperture Science Enrichment Center test subject Chell out of that tiny room with the toilet. That alone was impressive. And a controller in hand felt better than clicking a mouse, but that’s just me.

Portal is a story of isolation and determination. Puzzles, too. Chell awakes in the Aperture Science Enrichment Center with no idea how she got there and/or why. Actually, she might know–but she’s a silent protagonist, so mum’s the word. GLaDOS (Genetic Lifeform and Disk Operating System) informs Chell that she is to take part in a series of tests, and off we go to create portals and travel across large, open spaces and free-fall for minutes on end while potty breaks happen. There are 19 puzzle chambers and a much different final level, which I’ll get to in a bit. Funny and sometimes untrustworthy commentary from GLaDOS at the beginning and end of each chamber help expand Aperture Science’s lore and background without stopping gameplay.

Using the Aperture Science Handheld Portal Device–Portal Gun, really–and Companion Cube, players will have to navigate through chambers and reach the exit. Earlier chambers are very straightforward and tutorial-like, but as they progress, fresh tactics and tricks must be put to use, such as using momentum to reach new heights and manipulating energy balls to go where one wants. The puzzles really do test the player’s skill and patience, as rushing ahead is generally never the way to go. I have no room to brag, but I did pretty well, completing chambers 1 through, oh, 15 without having to use any kind of online guide or walkthrough. After that…phhhbbbt. Math has never been my strong point, and while you might think a game like Portal requires no math…well, it does. There’s timing to consider and mapping grid points and figuring out how to get from A to B in the quickest way possible, like reducing fractions.

I grew frustrated with the last four test chambers, but all grumbling and hate subsided the moment the final level began. As the tests progressed, GLaDOS’ commentary became harsher and colder, her motives beginning to shine through. Also, Chell discovered some previous test subjects–awkward would sum that up. And suddenly, live fire turrets are all around, brimming with glee to murder yet again. By the time GLaDOS began funneling us directly down into a furnace, Chell (and I) had had enough. Time to escape, but escape is no easy thing, even with portal tech. Everything we had learned from the beginning of the game is needed to make it out alive as there are no clear exits and entrances, just a lot of trial and error. Eventually, Chell finds GLaDOS, and we have a boss fight that is made all the more tense by the addition of a countdown clock. Hate those things. With victory, we get sunshine and song. Ahhh…

I wish all of Portal was like the final level. It required thinking, just like all the test chambers, but this was free thinking, with no hints or pictures to help Chell along. All the more rewarding. Making one’s way up through vents and across piping truly felt like escaping, and finding creative ways to knock out dangerous turrets is a joy, even if they sound so sad.

And yeah, the end credits song is pretty great. I’ve replayed it countless times since first hearing it around two in the morning, mostly in a daze. I am glad I got to first experience in a traditional sense, but my lack of sleep, sweaty fingers, and exhilaration at completing the game overwhelmed everything at that point, including robotic tunes. That said, I liked Portal for it compact size, its clear push forward, its just enoughness–I don’t think I would enjoy Portal 2 as much, and definitely have nobody to play co-op with, so I’ll just leave Aperture Science behind, free to continue on being cool and crazy. They’ll be fine; they have plenty of cake to go around.