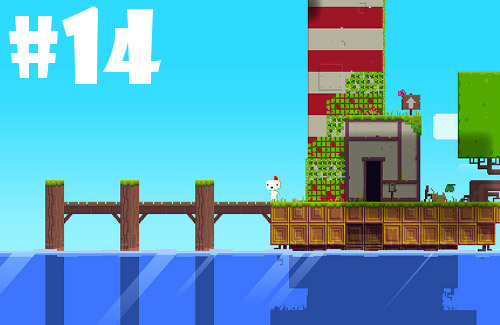 As the Fez world turns
So do symbols, clues, cubes, keys
Too dumb to grok it

Fez, a shift in perspective 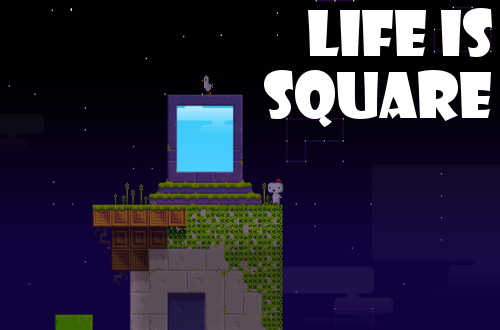 Back in January 2012, I put to e-paper the videogames I was most looking forward to in the year of our collective unmaking.

It’s an interesting list to reflect on a few months later, and here’s why. Two games have not come out yet, and I’m still super excited for them: Animal Crossing 3DS and Borderlands 2. One game has–Kingdoms of Amalur: Reckoning—but after playing the demo and discovering I couldn’t read any of the text, I’ve decided to pass on the title for the time being. Um, Suikoden: The Woven Web of a Century…yeah, still unlikely I’ll ever buy a PSP, but maybe someone will do a Let’s Play of it and I can experience it second-hand. And y’all are probably aware of my worry and disappointment about Game of Thrones: The Game.

Lastly, I named Fez. Here’s what I said about it:

A puzzle platformer with a unique style and perspective-shifting mechanic to it. The protagonist, a creature named Gomez, rocks a fez of its own and is obsessed with collecting hats, which sounds about right to me. Fez will be out on XBLA in early 2012, so maybe this month, maybe next month, or maybe the one after that. I’ll keep my eyes peeled for it nonetheless.

Okay. Not sure where I got the “obsessed with collecting hats” bit from as, far as I can tell, he’s more interested in finding cubes and cube bits to open up more doorways. But otherwise, yeah. Fez came out last Friday–April 13, 2012 to be exact–and I downloaded it as soon as I could, slipping in a cool, screen-rotating forty-five minutes during my lunchbreak. Proof is in the Achievements I unlocked. In all honesty, I could’ve played for hours on end, as it is one charming, inviting, and novel experience, cushioned nicely by a retro style, simple control scheme, and surprisingly calming soundtrack.

You are Gomez, and you earn the power to rotate your universe by acquiring a magical fez. With your new power comes great responsibility; you must find a number of cubes, which will unlock sealed doors and stop the world from being torn apart. Many of these cubes (or cube bits) are openly hidden in the levels themselves and can only be discovered by rotating the screen a certain way. This rotating can also be used to create shortcuts from one place to another, and along the way you’ll pick up keys, treasure maps, and ancient artifacts. I know how the first of those three collection items work, but not the other two…yet.

However, not all is perfect in Fez. The map function might as well be non-existent, as it’s convoluted and barely navigable. Things can sometimes get tricky spinning the screen you are playing on; one shouldn’t then also have to rotate the map this way and that. I’ve looked at it a few times, trying to find my way “back” to the hub level with the multiple locked doors, but couldn’t figure out exactly what was where and then how to get there. Navigating the world can also get a smidge confusing when you are traveling deeper into levels within levels within secret doors within other levels. There’s also some stuttering and long loads, which I can’t determine if it is part of the game’s design or just how it actually is. Either way, it hampers more than it enhances.

Ultimately, Fez is a real treat, and I’m gonna keep playing. My goal is to play as long as I can without looking anything up online. No puzzle hints, no telling me what the deal is with those owl statues, no quick deciphering of all those strange symbols that are popping up more commonly, no nudges in the right direction. Discovery is part of the gameplay; now watch me turn.