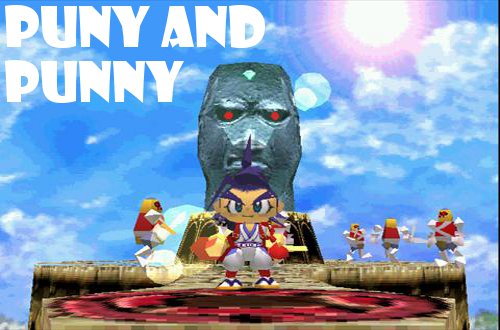 In Brave Fencer Musashi, you could purchase action figures from a local store. They came in actual plastic packaging, and you could either leave them in the packaging or take them out and “play” with them, which basically resulted in watching them animate some stilted way. There were special action figures earned for rescuing all 35 palace members, opening every chest, or beating the game at a certain level, but there really wasn’t a point to the action figures. Just things to collect, look at, and store in your collection, boxed or unboxed. Something I clearly should have done with my copy of this game–keep it. Also, if I remember correctly, my copy came with a playable demo of Final Fantasy VII.

The story in Brave Fencer Musashi follows a young, cocky swordsman named Musashi who is summmoned to a parallel world to defend Allucaneet Kingdom from the Thirstquencher Empire and rescue Princess Fillet. His journey is primarily focused on obtaining the Five Scrolls, which enhance the powers hidden within his sword Lumina, as well as interacting with people from Allucanet and a nearby village. It’s a light-hearted coming-of-age tale brimming with puns, most based around food, and so I loved it as a wee one and miss it dearly as an adult regretting all the games he traded in. I mean, really, name me two other videogames rocking this many food-based puns, and I’ll give you the world.

It’s an action RPG, with combat happening in real time. The in-game world also plays about in real time, too, with a day/night cycle in place, which affects the time when stores in the village are open for business. In combat, Musashi has the ability to steal the special attacks from enemies and use them as his own, which is a fun rabbit hole to go down in that I remember going around to every enemy I could find, just to see how he’d use their powers. Naturally, some are better than others. Without those special moves, you are just using simple combos with your sword and the occasional special sword after gaining some of the Five Scrolls. It’s not a terribly difficult game, though I do recall some of the boss fights frustrating to the point of controller-shaking.

For some reason, I remember the village the most. I was so used to stores in my RPGs just always being open, ready to sell me stuff and buy my junk. Not quite so simple in the Allucaneet Kingdom, as the stores are operated by men and women, and they all live lives. They sleep and go for walks and open shop at specific hours, which one will quickly need to learn to stay alive. Such as the Breadshop/Bakery, open from 7 am to 7 pm and closed on Thursday. Or that the Toy Shop is open from 12 pm to 8 pm and closed on Wednesdays. It really felt like, to me, a real, operating village instead of something static and the same every time you visited like in Wild ARMs or Suikoden. As a kid that only barely understood schedules from school, this aspect blew my mind.

Recently, at Tampa Bay Comic Con, a man was selling a bunch of old videogames, and I saw Brave Fencer Musashi on his table for about $40, sitting next to a high-priced copy of Suikoden II. I looked on with a smile, but only that–I couldn’t do the deed. Maybe one day it’ll come to PSN as a digital download, but $40 is probably a bit too steep for me. Until then, I guess. Oh, and don’t bother with Musashi: Samurai Legend; it’s not the follow-up you are looking for.