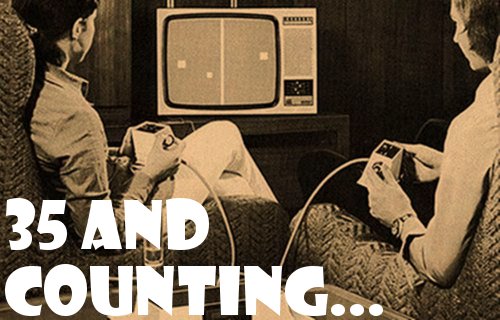 The last time I wrote a little bit about the actual number of games I’ve completed within a year, the post got featured on the front page of WordPress.com. The attention the post got was very nice if a little scary. Thankfully, there were only a handful of trollish comments to deal with, and the rest were just as excited as I was to be making progress with games and not just starting them and then tossing them aside for something shinier. We’ll see what happens this time…

So, it’s the beginning of November 2011, and I just beat my 35th game last night while Tara and I watched a badly taped version of The Goonies, which featured some amazingly amazing commercials from 1988. Remember camera film? They used to have commercials for camera film. Anyways, yeah, Broken Sword: The Shadow of the Templars gets all the glory here, but there’s plenty more to come. Two months left in the gaming year, and I’m wondering if I could cross the “50 videogames beat” mark, let alone reach it.

Looking at my backlog, as well as what’s still to come, I think it’s doable, but probably requires much more dedication from me than I’m capable of. See, I have gaming ADD, and whether or not it is actually a disease confirmed and diagnosed by a doctor, I have it; I absolutely love starting a new game, getting to see all of its mechanics and how it opens; very rarely do I push further past this bit magic and fireworks. Take, for instance, Radiant Historia, a stunningly original RPG for the DS that I gobbled up, but only until something else came out. Haven’t gone back yet sadly. Even my Chrono Trigger progress comes in spurts of activity, as I just can’t seem to stick with it for too long, always drifting away to something else with hopes of returning soon. And one game I do want to play of more is Professor Layton and the Last Specter, but Tara’s currently enjoying it, and I like when she finds a game enjoyable, so it’s all hers until she beats it herself.

And of course, November is loaded with big name games to help me climb a little higher. On 11/11/11, I’m picking up not only The Elder Scrolls V: Skyrim, but also LEGO Harry Potter, Years 5-7, the latest LEGO game for Tara and I to plow through. There’s other titles too that I want, but feel like I’ll have to resist in hopes of not breaking the bank (for example, Cave Story 3D, Super Mario 3D Land, Assassin’s Creed: Revelations, The Legend of Zelda: Skyward Sword, and Jurassic Park: The Game to name a few). It’s a disgustingly great month to be a gamer.

In terms of the backlog, well, if you’ve been reading me for awhile now you’ll know that I’ve been slowly working on collecting as many decent PS2 games as possible before they disappear entirely from store shelves. So, there’s those. Namely Suikoden III, Ys: The Ark of Napishtim, and yes, probably to Greg Noe‘s horror, Escape from Monkey Island. See, I have plenty to play, but it just requires willpower and time, and if I also want to be a famous artist/writer, well it’s probably not going to mesh well with that. So while I’d absolutely relish in joy if I completed around 50 videogames for 2011, I know it’s also probably not probable.

You can read about every game I’ve knocked out of the 2011 park right here on Grinding Down by following this nifty tag. Or, if you’re into looking at lists, I keep one pretty up-to-date over at GiantBomb.  Other than that, good luck to all of you out there with a compulsion to complete all that you got and please wish me luck on fifteen more. 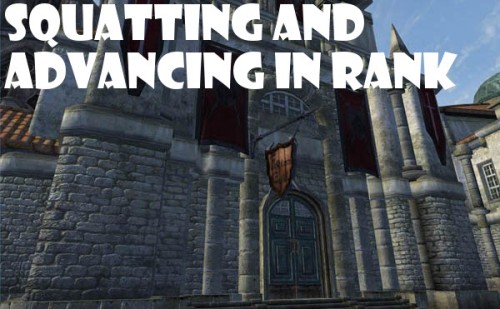 A long ways back, like in April 2011, on that infamous day where everyone gets hiiiiigh, I talked about diving back into The Elder Scrolls IV: Oblivion and giving some it another go, this time trying to play a little differently, as well as finishing up all the major guild quests. Well, that plan quickly fizzled out as that was actually the last time I played the game until this very weekend. I think my gaming ADD hit me hard, and I was off on some other adventure, one that was probably immediately followed by another adventure. And so and so on. Such is the life of a gamer…

But then, as the world outside went snow crazy, I started Oblivion all over again, giving Hodor the heave-ho and creating a creepy looking Night Elf woman witchhunter with bleach blonde hair named…Molly. She focuses on a little bit of magic and a little bit of bow and arrow action. Not bad, truly, and I was able to rush through the majority of the opening quests for the Fighters Guild, finally breaking into new territory, advancing not once, but many, many times. Oh, just look:

Good job, Molly. You’ll be Master of the Fighters Guild soon enough. Four more ranks to go. That is if the power comes back on and I don’t yet have The Elder Scrolls V: Skyrim to eat up. See, on Saturday, as an October snow unseen of before descended over New Jersey and Pennsylvania, the power kept flickering on and off. And yeah, I continued to game, or tried to at least. The last straw was the power shutting down as I was exploring a cave for the quest Azani Blackheart; I hadn’t saved since I entered the cave and did not feel like doing it all over again, at least not just then. So, we’ll continue to advance in rank some other time. I promise, Molly.

What is helping this playthrough versus the one I started with Hodor is that I’m no longer worrying about all the little things, such as picking up every bit of gear to sell, collecting a thousand and seven ingredients for alchemy purposes, and always trying to level up this skill or that in hopes of reaching the next level. All that matters is the quest at hand, and as long as Molly has some potions and plenty of arrows, we’re good to go. The quests themselves are not terribly difficult; the difficulty lies with–and this is inherent in all open-world games, I guess–the player’s determination and not getting distracted by Everything Else. With blinders on, one can get through the guilds pretty fast, I’m assuming. After Fighters, I think we’ll tackle the Mages Guild since Molly does have a knack for summoning skeletons.

This spurt of Oblivion playing is also a great reminder of what worked in that game from 2005 and what’s going to be ten times more fantastic in like twelve days. Every time I speak to someone and the camera zooms in on their fugly faces, Tara makes a noise. A mixture of a gasp and utter disgust. Especially for khajiit women. It’s the best.