Paul’s Preeminent PlayStation Plus Purge – The King of Fighters XIII 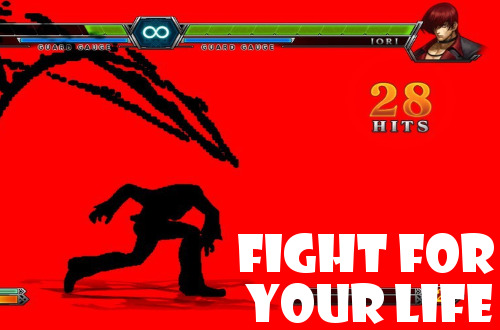 I’m struggling to remember why I had so much fun playing Tekken, Bloody Roar, and Star Gladiator by myself as a young teenager and now, as a full-fledged adult, I barely touch fighting games unless I have a real-life person to play against. To me, they aren’t fun solo, and online play is too competitive. Maybe it’s because I was fascinated by all the throw options in Tekken married with the instant replay feature. Or maybe…I liked having all the time in the world to figure out how to make characters grow ginormous in Star Gladiator or figure out who had the best beast transformation in Bloody Roar (answer: Alice the rabbit). Anyways, The King of Fighters XIII is a fine 2D fighter, but it’s not able to hold my interest for very long. In short, too much anime-esque yelling going on.

The main draw for The King of Fighters XIII is its three-on-three team battles. Basically, you choose a default team of three characters or make your own team by selecting three characters of your choice, and then you battle against your opponent’s team. Simple as that. Here’s the rub. This isn’t like Marvel vs. Capcom 3: Fate of Two Worlds or Tekken Tag Tournament 2, where you can swiftly switch between characters at any point during a match. No, in this one, you pick the order you want to play each person in beforehand and then fight with them until their health bar depletes. If you defeat your enemy, your character’s health restores a tiny bit for the next round.

Oh, and there’s a story. Via this mode, you’ll experience a variety of background stories not touched upon in the game’s original Arcade mode. You can discover the truth about King of Fighters’ “Ash Saga” and its secrets through the eyes of the main character, Ash Crimson, and other characters who were not directly participating in the tournament. Your decisions and battle results may lead you to discovering new story elements, which drives replayability to see all the different options and every scene. For me, I couldn’t really follow anything that was going on; a fight would start, there’d be some back-and-forth banter between the combatants, which got extra funny when fighting a clone of yourself, and then you’d pummel each other into the ground, hopefully with style. After that, it was on to the next fight, with a short anime cutscene to watch as you got closer to the main bosses of the mode.

I played through the Arcade mode using this tag team, mostly picked at random or by what I deemed looked like cool people from the outset: Iori, Benimaru, and Kula. You can tell me I’m wrong, it’s okay. I don’t know jack squat about this game series and these characters, but they have to be a thousand times better than Mai, who’s sprite animation is one hundred percent focused on her boobs bouncing in as inhuman  of a way possible; I’m sure she has her fanbase. Right, moving on. I was able to pull off a couple of special moves, several combos, along with a few EX finishers, which is something I always struggled with pulling off in, say, Street Fighter IV. Also, I unlocked two new characters for a game I’m going to uninstall real soon, so go me. Alas, I was not able to beat Saiki, as, like many final bosses in fighting games, he proved too tough–or is it cheap?–for my trio.

I’ll say this about The King of Fighters XIII–it is absolutely gorgeous. The animations on the characters are smooth and fluid, and the backgrounds are quite honestly pure insanity, what with all the detail and colors and different styles throughout. On occasion, I put my controller down and let my opponent beat me up just so I could watch more of what was happening in the background. The menus are slick and stylized, though I found the music to be mostly irrelevant. This series has certainly come along way from its heyday in 1994…though, even then, it was a beaut to behold on the Neo-Geo.

Similar to my problem with too many shmups for PlayStation Plus, I’ve got a bunch of other fighting games to get through. Namely, these ones–Darkstalkers Resurrection, UNDER NIGHT IN-BIRTH Exe:Late, and Skullgirls Encore. My god…the name of that middle title just strikes fear in my heart immediately. Until then, I’ll cut the cord for The King of Fighters XIII and set it free. Y’know, from my PlayStation 3 internal memory space.