007: Agent Under Fire stars a boy and his toys 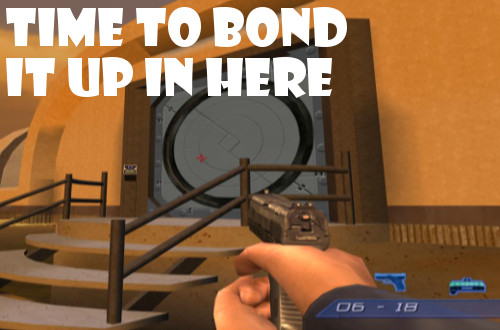 I’m pretty sure that I owned a James Bond game for the PlayStation 2 way back when, but I don’t think it was 007: Agent Under Fire. Might have been 007: Nightfire. This probably explains why there’s no entry for it in the Games I Regret Parting With tag. My memory on this is fuzzy, which I don’t think is surprising for a series that is constantly changing who portrays the main hero every few installments. In case you were wondering, I’m all about Idris Elba playing the next 007. Or Rosamund Pike. Either works great for me though I think Daniel Craig is more than perfunctory. All I really remember about this blurry action game from my past collection is crawling through ventilation shafts and using a technical watch-like gizmo to shoot laser beams at locked doors. So far, in 007: Agent Under Fire, Bond uses a cell phone to do this.

Anyways, I ended up getting a copy of 007: Agent Under Fire for real cheap back in February 2015. Now that I have taken out Final Fantasy IX‘s fourth and final disc from my PlayStation 1, I needed something to fill the void. By void I mean the empty space inside my console, not my heart. I wanted something ideally much shorter than another of my desperately lonely yet time-consuming JRPGs–sorry, Atelier Iris 2: The Azoth of Destiny, Radiata Stories, and Star Ocean: Till the End of Time, you’ll just have to wait a big longer–and figured this was a good fit, featuring a numbered set of levels, a multiplayer mode that I suspect I won’t be able to play at all due to a severe lack of IRL friends (unless bots are allowed), and nothing else. Let’s start bonding.

007: Agent Under Fire‘s plot is classic international espionage, to the point that, without writing any more words, you could probably guess it wholly. Need some help? Okay, I’ll budge. A major corporation has stolen data that will enable it to clone people, with grander plans of taking over the world by replacing those in important positions. Naturally, this can’t and shouldn’t happen, and in comes Bond–James Bond, that is–to nearly single-handedly destroy the threat of everyone looking the same. He does get some help from series staples Q and M, as well as CIA agent Zoe Nightshade. Don’t get her confused with one of Atlas’ daughters from Rick Riordan’s Percy Jackson and the Olympians series like I initially did.

I immediately struggled with the controls. Remember, this came out in late 2001, a time when every game from the first-person shooter genre was not created from a recognizable and well-accepted blueprint. I imagine that if I went back to things like Killzone or Red Faction, I’d also have the same problem. Thankfully, you can pick from a bunch of different controller schemes, and I found one that was much more in sync with modern layouts. Still, I stumbled here and there when trying to switch between a weapon and a tool, which are separate from each other, kind of like in the Metal Gear Solid series. I tried looking online to find a scan of the PS2 manual (my purchase was just the disc), but only came upon the ones for the original Xbox and GameCube releases; please trust me when I say that the default setup is more evil than Auric Goldfinger, Francisco Scaramanga, and Sir Hugo Drax combined.

Okay, okay, a part of me couldn’t let this issue rest, so I snapped some high quality photographs last night with my cell phone so everyone can see the difference I’m talking about. Here is the default setting, with, yup, “alt fire” on the select button and “crouch” using a trigger: 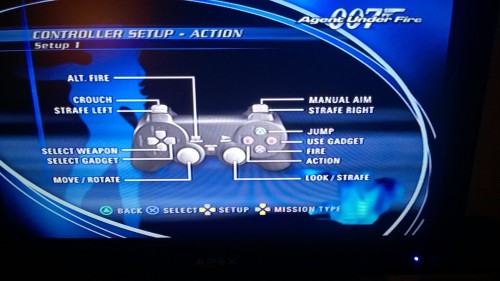 And here is what I went with instead to have it line up more with a modern first-person shooter, though it is a far cry from perfect:

Unlike many other videogames constructed around our titular leading man, 007: Agent Under Fire doesn’t correspond to a movie of the same name. It is its own thing, and that’s fine. It does try a little too hard to be mistaken for something of a similar quality, but I can ignore its attempts to throw a heavily polygonal woman at Bond to up the sexiness because the action is quite fun, as well as forgiving. Also, Bond is clearly modeled after Pierce Brosnan, but missing his voice. Aiming is tricky, but this isn’t Call of Duty multiplayer, so you can take your time to set the gun’s cursor just right before pulling the trigger, and it helps that enemies don’t mind standing still for all of this. Many might not enjoy the moderately mindless combat, wanting more strategy and challenge, but I’m mostly concerned with having fun and looking cool while doing it. Speaking of that…

Bond Moves. Besides being the title of 007’s eventual book of pick-up lines and dance regimes, these are specific moments in every level that has Bond doing something cool, followed by the classic bah-dah-ba-bum zinger we have all come to know and love and a 007 symbol in the corner of the screen. EA clearly paid a premium for this bit of music, to the point that your ears will be bleeding by the end of any session from a bombardment of Bond music. It’s good and bad, and some of the Bond Moves are laughable in executive. Imagine lowering a crane to hop across a gap and hearing that iconic tune. These things, as well as other stats, like damage taken or secrets found, go into a final rating score at the end of each level: bronze, silver, or gold. A gold rating will reward the player with a perk/weapon for the campaign or multiplayer mode, as well as place 007 tokens throughout. To get a platinum rating, you must now earn the gold rating again, as well as collect all the tokens. I acquired a couple gold ratings for the early levels, which earned me things like the Golden Gun and Golden Accuracy.

007: Agent Under Fire is not a great or even good game, sitting somewhere between mediocre and slightly better than mediocre, but it’s exactly what I want right now. A more determined player could plow through all the levels–some of which are driving sequences or on rails–in a single evening, but I’m nibbling away at this sub-par linear action game, making it last longer than necessary. I do believe a haiku is right around the corner as I only have four more campaign levels left to see unfold. For now, I’ll end this post with a Die Another Day quote–“I’m checking out. Thanks for the Kiss of Life.”

Adding to the Backlog – Seven PS2 Games at a Severe Discount

My original and only intent for heading to the local GameStop over the weekend was to pick up a used copy of The Last of Us, that way I could continue onwards from where I left of after playing a friend’s copy during that overly hyped blizzard last week. As I’m wont to do, I checked out the mini-section for PlayStation 2 games, since I think this shop and one other in the area are the last of their kind to still sell these case-less games for real cheap. It’s certainly only a matter of months until they stop. So, I saw a sign, a literal one hanging right in front of me–all PS2 games were 75% off. Oh boy.

I stopped doing these “adding to the backlog” posts long ago as it just didn’t interest me to call out every new game that I either got or downloaded for free. Which happens pretty frequently with me, thanks to indie bundles and PlayStation Plus and so on. Some purchasing occasions are more exciting than others, like this one. I can’t expect many to care, though SlickGaming might take note to see if his local GameStops are also running a similar promotion. Right. Here’s what I nabbed, and for future reference I’m going to include how much each one cost me after taking 75% off the listed price tag:

Bought for $0.67. Yup, that’s sixty-seven cents. Be prepared to see others in this listed around the same price. Anyways, I had no idea what this was, but after some quick research, it seems to be an action RPG inspired by titles like Diablo and Fallout. Okay, sounds good. Though I’m quite puzzled over how the main character’s anatomy works on the case’s cover, which, thankfully, did not come with my purchase.

Bought for $0.45. A mini-game collection with a plot involving you being the new kid in the neighborhood and beating an infamous bully to the ground before the first day of school starts. Yeah, I can get behind that, but it doesn’t seem like there’s a ton to My Street. I feel like I played a demo of it way back in the day and liked what I saw, but the memory for that is extremely fuzzy. Call me crazy, but I’m more inclined to try this one out first of the whole group.

Bought for $2.25, which was the highest of the bunch, but that makes sense when you realize that Sonic Mega Collection Plus is actually twelve to fourteen games on a single disc. A few of those copy over to my copy of Sonic’s Ultimate Genesis Collection, but that’s okay. A collection is a collection, and there’s some rarer Sonic titles here, though I promise to never touch Dr. Robotnik’s Mean Bean Machine again. Still bummed to hear about Sega leaving the gaming business.

Bought for $0.45. Funny enough, 007: Agent Under Fire was eventually going to be a Games I Regret Parting With post, but I haven’t gotten to it yet. Now I never will. It was actually my first Bond game, though I have no memory of how it went, save for some weird wristwatch shooting sections.

Bought for $0.67. I NOW HAVE ALL THE SKATEBOARDING GAMES, I WILL NEVER TIRE OR GROW WEARY OF SKATEZ AND HALFPIPES AND SICK, SWEET OLLI TRICKS NO NEVER!

Woo, seven more games to…well, not play right away. Yup, you know me, I have a few other things to attend to first, such as finishing up The Last of Us, DuckTales Remastered, and possibly starting either Final Fantasy IX or Silent Hill 3, both of which are on my to-do list for 2015. Also, now I want to pop over to the other local GameStop and see what PS2 games they have for super cheap before the deal vanishes and they just toss everything into a bin and set it ablaze. Gah, it never ends.