Smoke and Sacrifice is not what I expected to be. One of the first screenshots for the game that I saw was similar to the one at the top of this post. It looks bright and safe and a little mundane and reminded me of any number of early towns or villages you visited in RPGs like Suikoden or Breath of Fire. There’s a field being tended to and glowing Sun Trees that are obviously very important to these people and it just feels smalltown farm-like, but then things take a turn towards darker.

See, our leading protagonist Sachi must unfortunately give up her son as part of the village’s first-born rite; basically, she is sacrificing her child to appease the gods, but the good news–if you want to call it that–is that any future children she has will be safe from this custom. How nice. Years later, when suddenly the Sun Tree fades and all the priests vanish, she learns there’s more to this ritual, such as a whole underground world.

Smoke and Sacrifice is an open-world, narrative-driven survival RPG, where exploiting living ecosystems is the key to keeping air in your lungs. Sachi must constantly craft gear, fight off monsters, and explore a massive open world as she searches for her long-lost son. Along the way, she’ll meet strange characters and take on quests for them, as well as learn what really was happening with the Sun Trees and the first-born ritual. The game quickly goes from bright to dark to seriously messed up in a matter of minutes, and you’ll quickly forget all about that fertile land above, now replaced with a gothic wasteland of strange bugs and foreign ingredients.

Unlike many other survival games, there’s a solid if sadly morbid story to follow and no permadeath to deal with. Instead, you can save your progress frequently at a few save points dotted around the map, which are in the form of glowing computer screens, with death bringing you back to your last hard save. I recommend saving all the dang time. I have suffered the sad experience of collecting a bunch of ingredients for a half hour, stumbling into a combat scenario I wasn’t ready for, and having my weapons and lantern degrade at just that moment, losing all forward progress. It stinks and is maybe the harshest part of Smoke and Sacrifice.

The combat in Smoke and Sacrifice is both punishing and a little plain. You can up your chances of making it out alive by crafting an array of armor and weapons, such as a bone machete, but you never really feel that powerful. Instead, you are better off learning every enemy’s pattern and taking them out slowly and methodically. There’s a dodge move, but it is more of a jump away than anything I’d call extremely responsive, like rolling in Bastion. I wish there was a little more strategy or options for combat, but so far it is just mashing the attack button and hopping away when it looks like the enemy will strike. I did just start crafting smoke bombs, so maybe it does get a little more advanced, but I won’t hold my breath, especially when breathing in this underworld’s air is deadly enough.

I got this game for “free” from being a Twitch Prime member, along with a number of others that I hope to get to…eventually. I think I’ll poke at it some more as I am interested to see where this dark story goes and if Sachi finds her son while also wreaking havoc on the naughty priests that forced her into this situation to begin with. Weapons, armor, and lanterns constantly degrading quickly might be too much for me to deal with though…time will only tell. 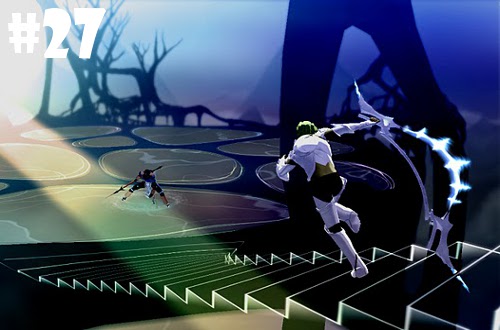 Climb this tower of
Angels, show them your Arch skills
Chapter 4 is cute

El Shaddai: Ascension of the Metatron is Biblical apocrypha in videogame form

Back in March 2013, there was a random sale on the Xbox Games on Demand marketplace section hub, and the cheapest deal among reduced prices was $2.50 for El Shaddai: Ascension of the Metatron. I knew nothing about the game, but it had an intriguing–if long-winded–name, and a couple of screenshots told me that I was guaranteed to play something at least visually striking. So I pulled the trigger, promptly downloaded 6 GB of unknown stuff, and played the first two chapters, unsure of what to make of things. Several months later, I came back to the game and burned through the remaining chapters over a couple of nights, and I’m still unsure of what to think. I like a lot of El Shaddai, but some aspects are of the fun-ruining frustrating ilk.

The game’s plot is heavily inspired by the apocryphal Book of Enoch, which follows Enoch, a scribe searching for seven fallen angels in hopes of preventing a great flood from destroying mankind. He is helped in this epic quest by Lucifel, a guardian angel in charge of the protection of the world who exists outside of the flow of time, and four Archangels. However, there’s a modern spin here, as Lucifel, voiced by an unrecognizable Jason Isaacs, uses a cell phone to converse with God, and several levels are set in a futuristic, Tron-like cityscape. Basically, you are trying to climb a tower, defeating fallen angels on each level, until you get to the top, to defeat the fallenest of all angels and save the world from the wrath of…God? Satan? Y’know, to be honest, I don’t really know which is the opposing force in this game.

Gameplay is mostly hack-and-slash action in the same vein as Devil May Cry, with the ability to knock an enemy in the air and juggle them with sword swipes. Er, sorry–I mean arch swipes. Enoch gets three different weapon types as he progresses: an arch for quick slashes, a gale for ranged attacks, and a veil for slow, but devastatingly powerful punches capable of shattering weapons. You can pull off some combos, as well as steal an enemy’s weapon to replace your own and take them down a notch. I found fighting Gale-wielding enemies to be the most challenging, but you eventually learn all the patterns. For bosses, it’s all about patience and waiting for an opening to attack. If you do die, you can mash some of the buttons repeatedly to revive yourself, and on Normal difficulty, you could do this four or five times, which made getting through some unrelenting fights possible.

Visually, El Shaddai is a delight. Every chapter offers something completely different, and the best-looking stuff can be found in the interim platforming levels connecting two chapters. There’s one section early on that I found myself smiling through its entirety, despite the challenge being presented. There’s a lot of pinks and purples and watercolor-like washing for background skies, as well as strange geometry throughout. Enoch and Lucifel have a pretty stylized, hair-billowing anime look to them, though I found most of the fallen angels to be boring design-wise considering they all wear the same getup for most of their battles.

Two things really bothered me with El Shaddai, and they both have nothing to do with its religious slant. One: the platforming sucks. Like, no. It’s some of the worst. You can barely tell where Enoch is going to land when he jumps, and the controls are so twitchy that, oftentimes, you’d still fall off a platform after getting there in one piece. Considering that platforming is how you move from one event to another, it needed to be tighter. Two: there’s no indication on-screen of how much damage Enoch was able to take, and how hurt the bosses were. Most of the time, it was impossible to tell, and some weapons are ineffective against certain foes and armor, causing me to second guess my choices. Strangely, after you beat the game, you are given the ability to turn on health gauges for Enoch and bosses. Yeah, that’s a bit boggling.

I will not be going back to play El Shaddai on a higher difficulty, but there’s an Achievement or two left that seem feasible. Otherwise, a gorgeous game with a plot that’s hard to concentrate on, given that the screen is just one explosion of artistic beauty after another. Play it to see.