Persist, a backwards platformer with spirit

First you lose your arms, stripping away your ability to swim. Next, the Goddess takes your legs, leaving you as a simple head, only able to roll left or right, deeper down into a dark abyss. And she doesn’t stop there either, relishing in your torture. Persist is a backwards kind of platformer; basically, the further you get, the more standard abilities you lose, reducing you down to nearly nothing, and as the story plays out, it sort of makes some sense why such a being would do this. Don’t be deceived by the game’s retro look and minimalist gameplay–it was designed that way for a reason, and it is totally worth playing.

Again, Persist follows the story of a lone spirit, trying to reach a mysterious Goddess to ask for forgiveness for his past sins so he can ascend to the higher plane of existence. Unfortunately, this Goddess really resents him, which becomes somewhat clearer by the end, and constantly puts him into increasingly dangerous situations, both as a test and a bit of torture. This game was created in just under 48 hours by @AdventIslands for Ludum Dare 26, wherein the theme was minimalism. A couple of other games to come out of that jam that I talked about here on Grinding Down were TOOM and Gods Will Be Watching. It’s absolutely awesome how much can be crafted from the idea of “how little,” and I suspect I’ll keep finding little gems from this jam as time marches on.

For those interested, I played a bit of Persist in my new speculative YouTube adventure called Paul Plays…, and you can check out my lackluster jumping skills in the video below:

I did immediately keep playing after the video ends, as there were only two sections left to complete, the one where you’re just a detached head and another that I won’t spoil here. They are very enjoyable and more puzzle-based than everything before it, which is more classic platforming of the Mario kind. The story comes to a head immediately after the last level, and it takes a surprising turn, but it really could have been something more if the writing was stronger and more effectively narrated throughout. I understand that there was a time limit to abide by, but I’d love to have seen a few more levels added or lengthened to stretch Persist out, especially when you’re just a head, as figuring out how to time your rolls from platform to platform was a lot of fun. The small amount of music in the game is quite good; not loud enough to be distracting, but soft enough to jump against, and helps create a rather somber ambiance, which is quite fitting once you learn what the spirit did.

Either way, give Persist a play, and do it sooner than later or else the Goddess might take away your hands, and you’ll have to give up gaming entirely.

TOOM, a clickable moment in one man’s nonsensical day 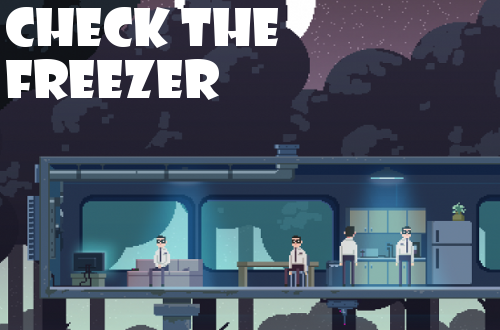 All right, I’ve given another Ludum Dare 26 game a go. This time, it’s TOOM by Mike Kasprzak and Derek Laufman. Overall, I’d call it pretty slow and highly nonsensical, but still worth your clicks, if only to experience the way the camera works as you move around the screen. Also, it looks fantastic, thanks to solid animation, a phantasmagoric color scheme, and pixels that shine with character, even if many of the items ultimately aren’t used.

In TOOM, you control a generic-looking working man–he’s got a tie and either a name badge or pocket protecter thing going on with his button-down shirt–on what I have to assume is his day off. His apartment consists of one long room, which sits high up in the trees on metal stilts, swaying lightly in the wind. It’s obviously future tech, and so I’m sure no one is worried about large gusts or mindless lumberjacks, but you’d never catch me relaxing way up so high. You can click around on different items in the room, and at the far right end of it is something called a Hyper Tube, which you can’t use just yet. Though not explicitly said, the goal is to use that tube. As you click around and open cabinets and trash cans in search of clues, a few items get added to your inventory. Eventually, after all your hard work–I won’t spoil the step-by-step solution though I will say that not everyone is a fan of frozen friends–you are able to use the Hyper Tube. Cue black screen with the word FIN on it. All in all, took me about ten minutes to get through.

My two biggest problems with TOOM are as follows: 1) the ambient music loops, but not endlessly, cutting back to the beginning of the song in a jarring manner after a minute or two, which even causes the game to stutter for a half-second and 2) the inventory and how to use the items within it was not easy to grok. In fact, I think I just got lucky most of the time, constantly clicking on literally everything I could. Guess I’m use to being able to click an item in the inventory and then click what to use it on. Wanted more, even if it was just a text description, mostly because I’m not sure why that thing that was in the freezer was in the freezer. Fairly small complaints, really.

Even after completing the game, I don’t fully understand its name…wait, is the joke that TOOM backwards is moot, which can mean “of little or no practical value or meaning.” Is that it? If so, I don’t think that’s entirely the case here and the developers might be a bit too hard on themselves, but when your reward for finally figuring out exactly what each item is used for and getting into that Hyper Tube is a fart and toilet flush…well, yeah, it does feel kind of unessential in the long haul.

Well, another Ludum Dare has come to pass, and the latest theme to build upon was “minimalism.” That is up for total interpretation, of course, and one game called Gods Will Be Watching focuses more on the gameplay aspect of it than anything else. By that, I mean you are limited in what you can actually do. First, the setup, which sounds something a bit like Harlan Ellison’s “I Have No Mouth, and I Must Scream,” but is not it completely. Either way, I dig.

The cyberfuture is now, and your research group–consisting of a dog, soldier, doctor, psychiatrist, engineer, and robot–has been ambushed and stranded on the paralytic landscape of Medusa, home to a devastating virus capable of surfacing one’s own madness. A broken radio is your only way of getting in touch with civilization, but it will take time to repair the thing. Days, actually. The main goal is then to repair the radio in 40 days, or sooner if you can. However, the biggest roadblock is that you can only take so many actions per day, and Sergeant Burden’s group is slowing starving and losing their minds. Hard decisions incoming, for sure.

I’ve played Gods Will Be Watching twice now. My first outing saw me succumb to the elements on the very first day, as I did not realize how vital a burning fire was to the group’s survival, though in retrospect it makes obvious. I was too curious with learning who the group members were that I spent my five actions simply talking to them. Everyone froze and died overnight. Okay, lesson learned. My second attempt saw me lasting eight days in total, losing the engineer on day six, but continuing on without him for two more days until…well, to be honest, I’m not entirely sure what I did wrong. I had plenty of food, some medicine left, and the fire still going. And that’s probably my biggest worry over this, that a lot seems determined by randomness. That might not actually be the case, but the game doesn’t present you with any indication you are doing things correctly or mucking it all up. You just live, talk, repair, gather food, struggle onwards. Sometimes if you do that in a different order or miss one element…you die. Hmm. Blame those fickle gods that are watching, I guess.

Graphically, it is what you see above: a single screen, with a line of characters around a lake that occasionally change postures, but otherwise remain stationary, depending on if they are still alive or not. If the fire gets too low, they begin to shiver. If the madness starts creeping in, they will show signs. For pixel art, the characters do come across as realized and unique, and strangely people you care about and want to see stick it out for 40 days. It’s more defined than Sword & Sworcery, but less captivating. I really appreciated the purple sky reflecting its color onto the frozen lake.

I did find some problems with the writing, mainly from a basic grammar perspective (several misspellings throughout, such as “wich” instead of “which” or “its” when they meant “it’s”). The dialogue between Sergeant Burden and his group changes based on the day and scenario, and it’s written in a way that leaves you guessing about where you should be spending your limited action points. The soldier mentions he loves his dog, the engineer says he himself should die before the psychiatrist, and so on. You even have the option from the very beginning to go on a slaughter spree and kill certain group members. It makes every action you take seem absolutely vital, and they might very well be. Or not. Again, there’s that behind-the-curtains randomness that can feel unfair at times.

I don’t believe I have the endurance to last 40 days, but you can give it a shot. Let me know if you and the entire group made it off Medusa safely and soundly, and don’t forget to tend to that fire.

Tagged game jam, Gods Will Be Watching, Harlan Ellison, I Have No Mouth