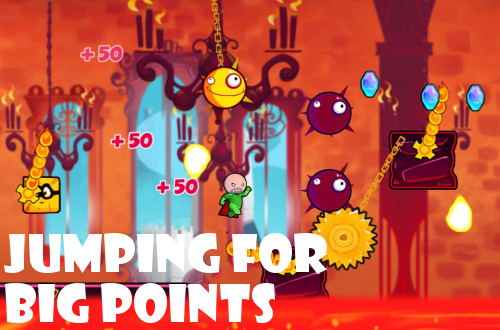 Here’s a rare happening when it comes to all these PlayStation Plus Purge posts–I’ve actually already played a small bit of Cloudberry Kingdom already, our topic du jour, but I naturally remember nothing more about it other than that. A quick search on Grinding Down shows that I definitely didn’t have anything to say about the game whenever it was I last touched it, and I don’t know how much more I’ll have to say about it now because…well, it just kind of is what it is. Still, let’s find out together.

First, some pertinent stats upon returning to Cloudberry Kingdom after what I can only guess is several years; my PlayStation 3 says I installed it on June 2, 2015…yup, so there ya go. I won’t go into them all, but here a few standouts:

Cloudberry Kingdom is an action platformer created by Pwnee Studios and published by that lovable French fatcat Ubisoft. The game uses a set of algorithms developed by Jordan Fisher to create procedurally generated levels that can be adaptive to the player’s skill level, in-game character abilities, and alteration of game physics. Whatever that means. Basically, the levels change based on how you play, which is neat, but I probably wouldn’t have known that unless I read it first before playing. To me, the levels in story mode feel mostly handcrafted, so if it is changing based on my lackluster jumping skills, that’s kind of cool. If it’s not, oh well.

There is…a story to follow. Or try to care about. Something called The Orb resurfaces and, with it, comes Kobbler with his mania and Princess with her endless boredom. It’s only a matter of time before Bob, Cloudberry Kingdom‘s hero, shows up to put order back to madness. Three powers struggle for victory, and the fate of Cloudberry Kingdom hangs in the balance. I really don’t know what to make of all that. Honestly, it’s like reading a short summary of something in a different language. Wait, wait a freaking second. I just discovered this major factoid–Cloudberry Kingdom touts celebrity voice actor Kevin Sorbo, the star of hit TV series Hercules: The Legendary Journeys.

I’ll be honest with y’all; I don’t dig Cloudberry Kingdom‘s look. It hurts to say because, obviously, I love cartoony styles, but there’s just something ultra plain vanilla about the graphics here. They look like stickers atop a muted piece of background art. The jumping is a bit floaty, but it’s functional enough, though the story levels don’t present much challenge; I’m sure if I got further into the campaign mode I’d come across some real zingers, but that won’t ever happen, at least not in this lifetime. In addition to the main story, there are four additional modes: Escalation, which throws increasingly tough levels at you; Time Crisis, where there is a timer that is draining gems to time to the clock; Hero Rush, another timed mode where you play as different character types; lastly, Hybrid Rush, an absurd amalgamation in which you’re afflicted by multiple abilities simultaneously.

Cloudberry Kingdom has a neat idea behind it, but it lacks polish and imagination. You can’t rely simply on Kevin Sorbo to sell your game…though I am interested to here some of his voicework now. I’d love to see the notion of randomly generated platforming levels explored further, as this is clearly just a nugget of an idea here. It’s just not enough currently.