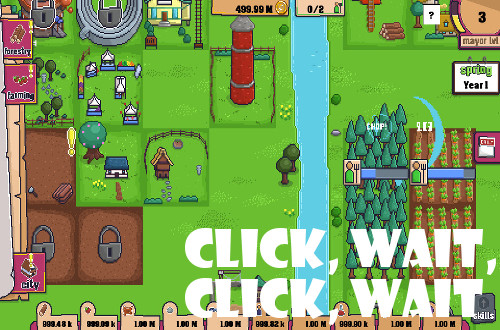 I don’t play as many clicker/idle games as I did a few years ago, but I still check in on a few now and then, such as Clicker Heroes, Idle Champions of the Forgotten Realms, and Harvest Seasons, today’s topic du jour. I also have some Office Space-themed thing on my phone that I looked at once or twice, but still haven’t uninstalled for some reason or another. It’s there for emergency purposes, like many of the games on my cellular device. Either way, if built right, an idle/clicker game can be quite relaxing and satisfying or dangerously addicting. So far, that’s how I feel about Harvest Seasons.

What exactly is Harvest Seasons? Well, one, it’s free on Steam. Second, it’s a fusion of many familiar things, such as a farming game, a city building game, and an idle/clicker game. It’s all about harvesting resources and leveling up your individual tiles to, well, create more resources, which will open up more options to increase your farmland’s yield. It’s a cycle of clicking and waiting, but a surprisingly addicting one because there never seems to be a dull moment, as something is always asking for an upgrade and your workers need to continually be kept busy cutting down trees, gathering crops, mining ore, or carving animal skins. Otherwise, you just aren’t growing.

It’s got a good look, heavy on the cartoony pixels, but the graphics are not the star here. They are functional enough. You can also stay very far zoomed out, which I do, as it lets me see more at once than being all up and close. I did have to turn off all the music and sound effects though as they are a little too loud for my sensitive ears, and because I don’t play in full-screen mode I can rock a YouTube video or Spotify playlist instead. Also, some of the font is a little tiny to see, even with my face only inches away from the computer screen. These are minor complaints though because, so far, and I’m still only in the first season of many seasons, I’m enjoying the clicking and waiting and clicking again.

Evidently, Harvest Seasons was lovingly hand-crafted by a husband and wife team, under the name of Bearded Bunnies. That’s super cool. This seems to be the duo’s first game, and I think it has a lot of promise. It’s not about loot crates or forcing you to purchase a ton of boosters with real-life money; instead, it’s pretty chill in letting you go at it however you want. For me, that’s checking in on it at least once a day, clearing out a few requests, focusing on unlocking at least one building or taking on a dungeon level, and then leaving it off for the remainder of the day. You aren’t punished for being away, and I find coming back to it with a ton of things to do to be ultra exciting.

Also, and this is a silly thing, but Harvest Seasons comes packed with over 400 Achievements to unlock. Granted, the majority of them are for reaching generic-like levels of things, such as harvesting X amount of crops or earning X amount of gold, all at different tiers, but it does hit that special spot in your brain to see so many unlocking so quickly. I’ve got about 50 so far, with plenty more to pop.

At some point, I’m going to have to “buy the farm” and do the thing I hate doing in these idle games but understand it is a necessity and start over…with some bonus perks, of course. I believe this is how you move from one season to another in Harvest Seasons. Eventually, you hit a wall where leveling up requires too much time or effort on your part, and your best bet is to start anew, with some enhancements to help get you back to where you stalled quickly. I get why it must be done, but it never feels great, wiping the slate clean. This is why, in real life, I am no farmer.