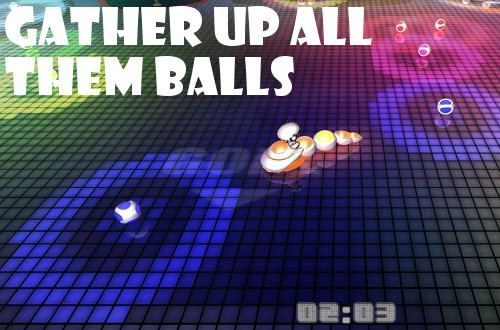 I’m pretty sure I’ve never played the original Snake, having only touched some updated version of it on a cell phone many years back. Snake‘s a pretty simple concept: the player controls a dot, square, or object on a bordered plane. As it moves forward, it leaves a trail behind, resembling a moving snake. In some versions, the end of the trail is in a fixed position, so the snake continually gets longer as it moves. Another common take on the mechanic is that the snake has a specific length, so there is a moving tail that is a fixed number of units away from the head. Either way, the player loses when the snake runs into the screen’s border, a trail or other obstacle, or itself. According to the ever-trustworthy Wikipedia, there are over 300 Snake-like games for iOS alone. Oh me, oh my.

Which brings us to…Snakeball. This one evidently uses most of the mechanics of the late 1970s Snake, with the goal being taking balls and throwing them into the hole at the center of the stage. There are variations on this gameplay, but the main goal stays the same throughout, accompanied by a flashy disco graphic style. Stages take place on disco floors that Tony Manero would greatly approve of. You can select between 16 different characters, all with a bunch of color schemes, and, evidently, if you had access to a PlayStation Eye camera, which I do not, you could snap a photo of your face–or anything else you found photogenic–and plop it onto one of the riders. Developed by Gamoola Soft, this is very much a casual game, which is why I played an hour or so of it, saw what it had to offer, and uninstalled it from my PlayStation 3, as per the goal of these themed posts.

There are three main modes in Snakeball: Snakeball, Challenge, and Ball Frenzy. Snakeball is the multiplayer mode, where up to 8 players can play online; however, since this game came out at the end of 2007 and I was playing it for the first time in 2018, a decade later, there was nobody online to play against. Shocking, right? You can battle bots though it isn’t too exciting. The Challenge mode tasks players with navigating through levels to open up a teleporter and go to the next level, with 14 levels in total to complete. Ball Frenzy is basically a remake of the classic Snake, with 10 levels to conquer. The goal of this mode is to collect all 1,000 balls in the level without crashing and destroying the ship.

Did you know that, for a time there, Trophies weren’t a thing on the PlayStation 3? They kind of only came around after the Xbox 360’s Achievements system began picking up steam as Sony wanted in on the extra stuff action. A lot of games got patched to include poppable Trophies, and all games going forward seem to now have ’em. However, Snakeball was not one that got graced with a patch, and so it is just this very straightforward experience that is mostly fine, but a bit lifeless and repetitive and lacking goals. 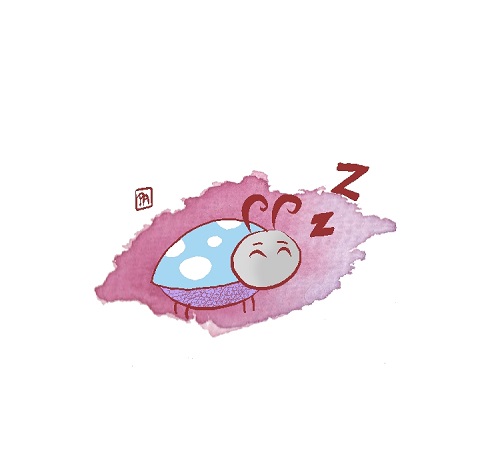 I’m finding it difficult to criticize I, Hope

I, Hope was created without the objective of making a profit. Developer Kenny Roy is teaming up alongside the GameChanger Charity to ensure that all proceeds for the game are donated to said charity, which supports children and children fighting cancer and other life-threatening illnesses. It’s a beautiful thing, really, though now I feel somewhat bad because I got my copy through Twitch Prime’s free games of the month thing. Hopefully Twitch is donating some funds their way based on the amount of service subscribers they have or something like that. All that said, I wish I, Hope was better than it ultimately is, and I’m finding it difficult to criticize a game with such an earnest cause and outlook. Still, I must.

I, Hope is the coming of age story about a young girl named Hope whose town has been taken over by Cancer. The game is not trying to be subtle whatsoever with its narrative. You are Hope, you are battling Cancer. Other games have tackled this subject, such as That Dragon, Cancer and Re-Mission, though I can’t speak about how on the nose or not they played it. As Hope, you are traveling to a bunch of islands to collect tools to help her on her quest to push back Cancer, and to get these tools, she’ll need to defeat monsters and solve various puzzles. It’s a typical third-person, character action game in the veins of Devil May Cry and Bayonetta, but with the violence toned way down, no insane combos, and graphics that look like they’d call the PlayStation 2 home, not that that’s a bad thing really. Actually, now that I think about it, the game also reminds me a bit of Invizimals: The Lost Kingdom.

The gameplay consists of you, as Hope, running around a somewhat sparse level, attacking cancer-infected monsters with your staff and solving environment-based puzzles. The problems start immediately. The jumping and attacking don’t feel great, and I even fell through the world a few times, popping the “That’s not how the story went…” screen, which brings you back to a checkpoint. Trying to move objects is basically a dice roll as to whether or not you can even move the block when you hit the button to lock on to it. You also acquire some abilities, such as being able to see hidden elements with the goggles or freezing moving platforms with a cymbal thingy. Each world seems to end with a boss fight that often requires you to use that island’s specific power to defeat it. Also, you can collect letters to spell hope, which unlocks some extra content–I think it’s just a soundtrack selection–from the main menu.

I got to the end boss of the third island, the volcano-themed heckhole, and called it quits, something I really don’t like doing in any game. Sure, sure, I’ll walk away from a game or take a break, but always with the intention to return to it eventually. With I, Hope, I was saying, “Nope, no more.” The cause is good, the gameplay is not, to the point of it being frustrating. I found next to zero coverage of the game on YouTube, but one person did play through the whole thing, and I’m glad I stopped when I did because the puzzles seemed to only become more maddening as Hope gathered more tools and tricks to use against the Cancer tentacles. It also ends abruptly after a light-bouncing-between-mirrors puzzle that we have all experienced before in games like Beyond Good & Evil and the Professor Layton puzzle games, on both a down and up beat. I just don’t know.

I, Hope has one thing going for it–its unceasing amount of support for those fighting cancer. Me too. Cancer sucks, hard. As a game, one for all ages, but seemingly geared towards a younger group, it’s both bland and underdeveloped, and I found nothing satisfying in either the platforming, combat, or puzzle solving, and those are the three main elements that make up Hope’s quest. I am all about supporting causes for cancer research, and this is one of ’em, but a word of warning–you’ll be extremely disappointed if you also want a good game to play out of the donation.