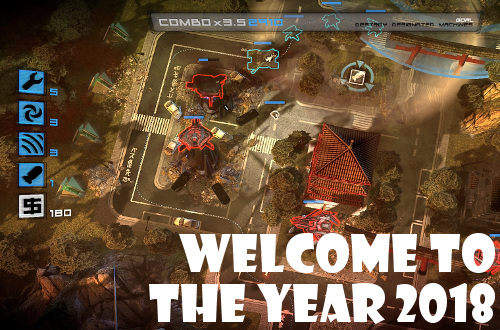 Anomaly: Warzone Earth is set in the year 2018, where sections of an alien spacecraft have crash-landed in several major cities around the world, including Baghdad and Tokyo, and doom is beyond impending. Y’know, not all that much different from our current climate. Anyways, you take on the role of the commander of an armor battalion, referred to as “14th Platoon,” and are sent to investigate anomalies that have occurred in the vicinity of these wreckages and gather information on what is happening in the affected areas. See, the anomalies–which, if you didn’t know, are something that deviates from what is standard, normal, or expected–are interfering with radar and satellite imagery and must be dealt with to neutralize any potential threats.

Y’all should already know at this point that tower defense is not a favorite genre of mine. It’s not to say I hate it to the point that I won’t play anything in it, as I have enjoyed a few–namely Kingdom Rush and Plants vs. Zombies–but generally I’m not hooked on the gameplay. I only played Defense Grid: The Awakening long enough to get some specific Achievements back when I was trying to hit a certain amount and then uninstalled the game without any further thought. Harsh, but true. Well, Anomaly: Warzone Earth is kind of like a reverse tower defense. Or, if you are feeling silly, tower offense. However, I’m continue to remain not hooked.

Basically, you control a bunch of mobile units in an environment brimming with enemy turrets, making your way to a specific point on the map. Anomaly: Warzone Earth takes this idea one step further by giving you control over what you can build, the order in which you place your units–they move in a singular line–and by also allowing you to plot out the course you’ll take dynamically during the mission, switching routes when necessary or a better path opens up. I enjoyed the rethinking “on the fly” part, as well as running ahead of my units and gathering power-ups, seeing what enemies and traps are in store.

I like the look of Anomaly: Warzone Earth a lot, and the top-down perspective really makes you feel like a god, commanding these soldier-esque ants to do your bidding. You direct all the movement, the moment-to-moment action, and collect power-ups dropped on the battlefield from planes overhead. The UI is clean and stylish, with the map screen sporting a beautiful mix of blues, whites, and reds, and the tutorial never really felt like a tutorial, pushing you through the first mission quickly while teaching you things along the way, such as how to heal units or purchase new tanks. That said, the story is fairly ho-hum, with the voice acting not doing it any favors.

I played the first three levels of Anomaly: Warzone Earth‘s campaign, stopping at mission 4 “Distress Call,” and that’s enough for me. There’s other modes, like Baghdad Mayhem and Tokyo Raid, that are grayed out on the start screen, and I’ll never experience local co-op, but that’s okay. I liked this more than I thought I would, but not enough to keep going.